Ali shot! 40 million into the public travel, plus code network about the car market 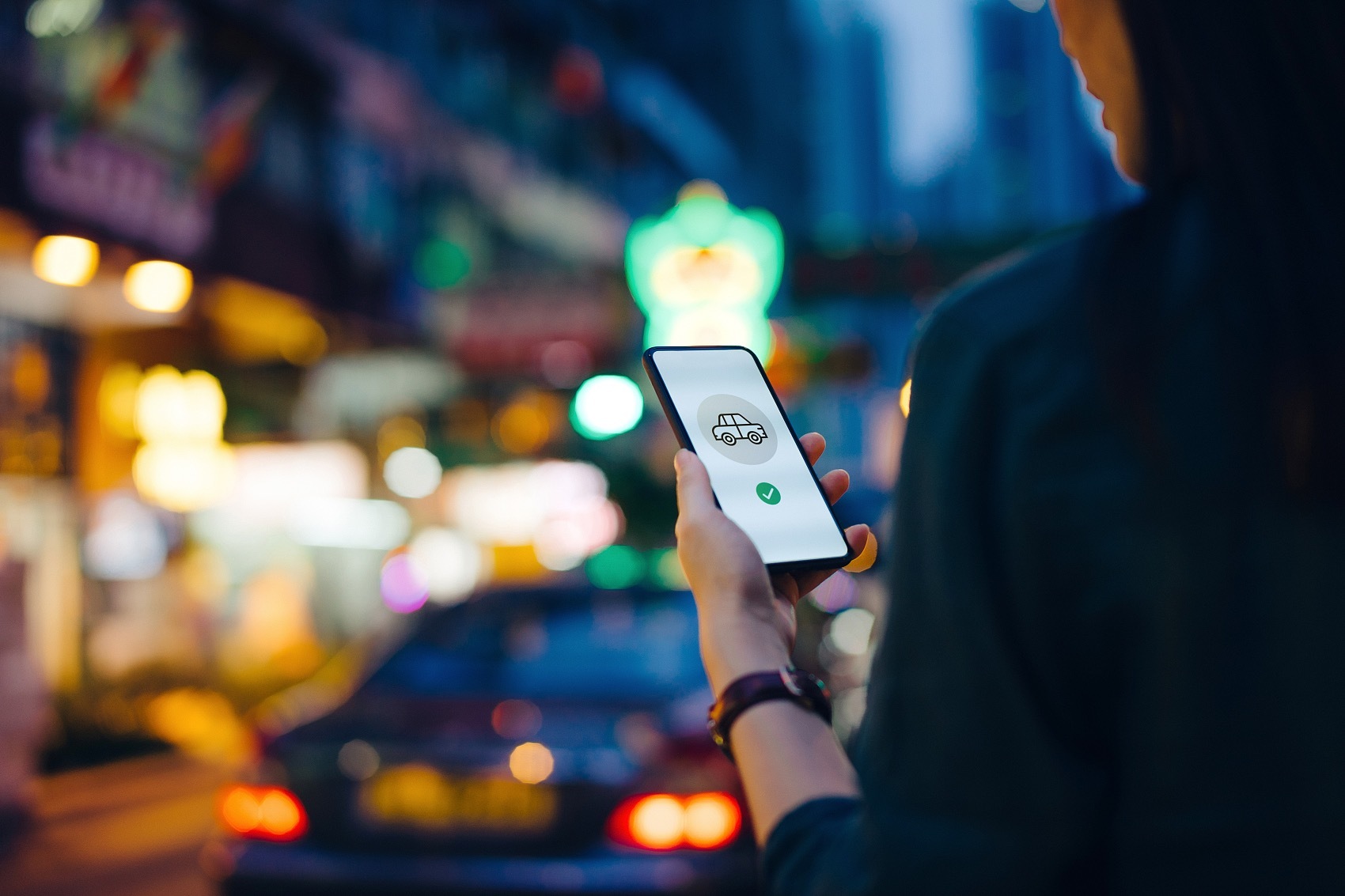 Recently, Alibaba has continued to lay out in the field of online vehicles,Within a monthEven cast two network car platform.

On the evening of November 17th, Mass Transit and Volkswagen jointly announced that in order to further promote the development of existing business and planned business, Volkswagen Travel intends to increase capital and expand its shares to introduce investor Ali. 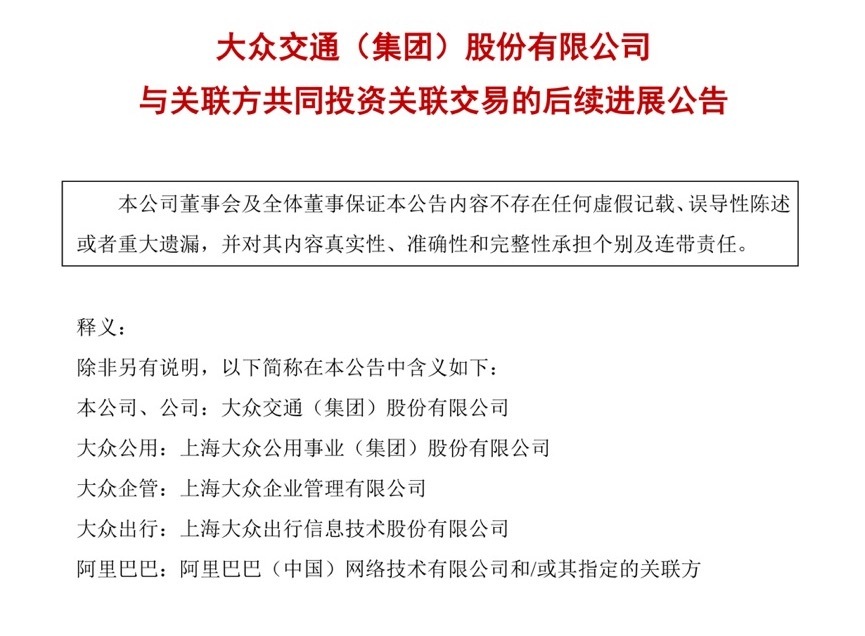 Ali will invest a total of 40 million yuan in two phases, of which about 70% will be included in the registered capital and 30% into the capital accumulation. Of the RMB20 million invested in the first phase, RMB138.889 million was included as the registered capital of the public travel, while the remainder of RMB6.111 million was included in the capital accumulation; The Company and other original shareholders waive their pre-emption rights for this capital increase. 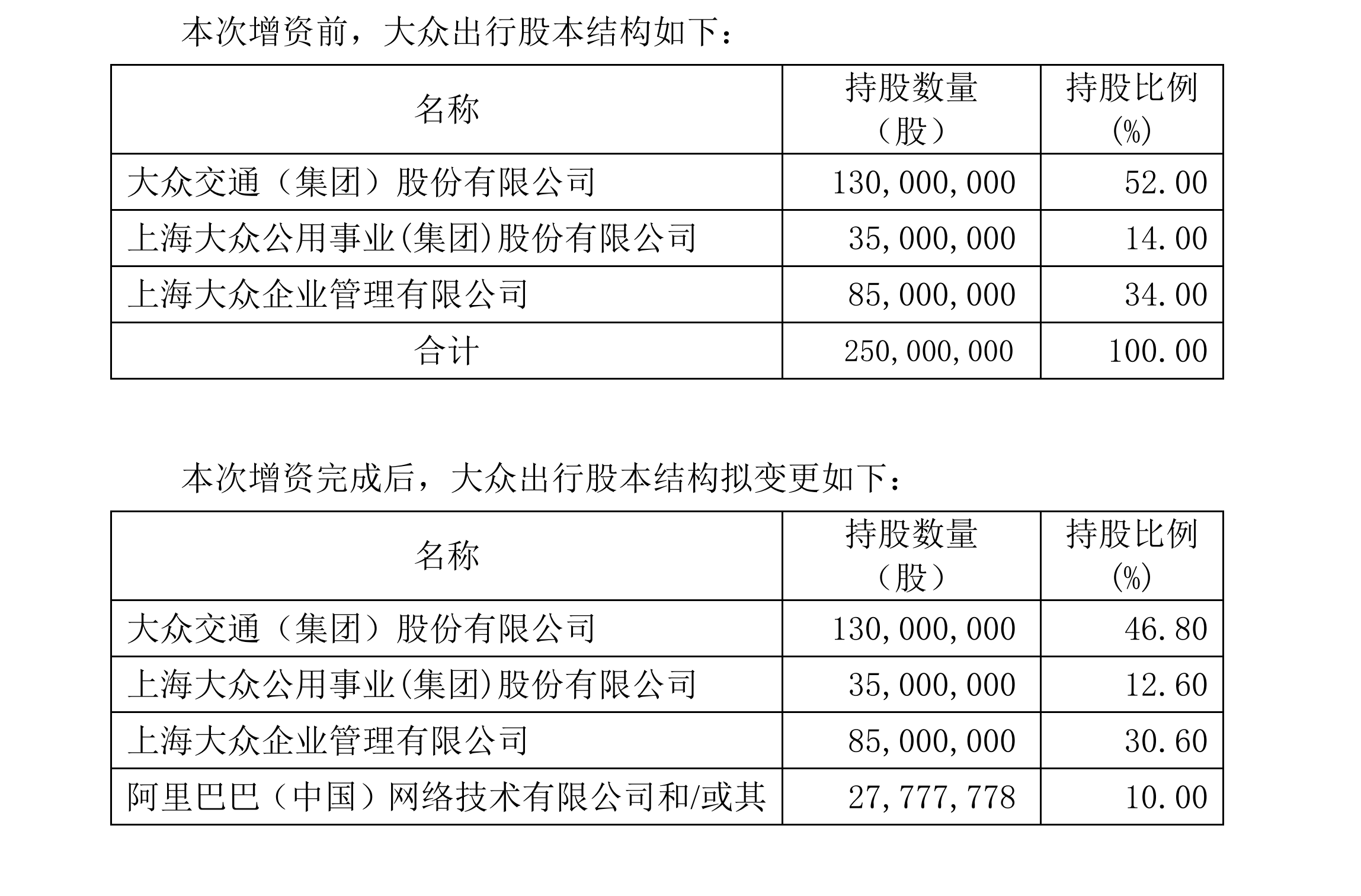 After the capital increase, Ali's stake was 10% and Volkswagen's shareholding was reduced from 52% to 46.8%. The shares of mass transit and mass enterprise management were 46.8% and 20.6%, respectively.

Up to today's close, the share prices of the two listed companies have rushed back high. As recently as November 9th, Ali made his first foray into Hello Travel for $280m. It also means that since the antitrust, capital is re-favoring the opportunities in the online car market.

Why does Ali want to invest in mass travel?

It is understood that the Ali investment in the public travel was established in 2015, in March 30, 2016 officially opened. As a wholly owned subsidiary of Mass Transit (Group) Co., Ltd., it is the first mobile Internet taxi platform established by taxi companies in China.On-line access to the Shanghai area of the first network license plate.

Sky-eye data show that the registered capital of public travel 250 million, the chairman of the board of directors for Dong Jiyuan. At present, there are taxis, special cars, government and enterprise vehicles and station cars, including four taxi business. VW has 28 years of experience in the traditional taxi industry, with clear advantages in vehicle management, service management and safety management.

In addition, the public travel website shows that it has already cooperated with Alibaba. In November 2019, Volkswagen Travel in Tmall flagship store integration to open the automotive after-market services, integration of the post-travel market, into the field of e-commerce expansion, currently has recharge, car inspection, driving training, used cars and other products.

After this year's drop-off crisis, other domestic network car platform saw the opportunity to compete for market space. Ali"bet" has a "mass system" background of mass travel, in line with its investment in the field of travel layout logic.

It is worth mentioning that in the immediate follow-up to the capital increase announcement,Mass Transit issued a risk warning a few hours later, saying the deal could require approval from authorities and there was a risk that it would not be approved and could not be implemented.At the same time, said that the public travel is not included in the company's consolidated statements, its operation and this capital increase on the company has no significant impact.

Continuous layout network about the car field, Ali first into the Hello travel

Recently, Ali has continued to lay out in the field of network cars, in the field of travel has a number of investments. 9 November,Ali also took a first stake in Hello Travel for $280 millionThis is also the second financing for Hello Travel so far this year. However, Ant Group has been accompanying Hello travel for a long time, Ant and Hello tied the knot at the end of 2017 Hello's D1 round of financing, since then Ant has repeatedly added yards.

It is understood that Hello Travel announced in early November to complete the financing contract, involving the amount of $280 million, investment institutions including Ant Group and Alibaba. So far, Hello Travel has raised more than $500 million by 2021. At present, Hello Travel business development is very rapid, the company has more than 500 million users in 5 years, to achieve a single shared bike business to a diversified travel and life service platform successful transformation.

Ali's company does not have its own network to contract vehicle capacity, but Ali in February 2014 wholly acquired Gaud Maps, and in 2017 launched the aggregate taxi service sector "Gaud taxi", the user travel orders are distributed to the third-party network car platform, and then by the third-party network car service provider performance. In 2020, Gaude Map achieved an average monthly active user of 514 million, a total of 4.5 billion installations, slightly higher than Baidu's 511 million, 4.3 billion installations, continue to link the first position in the national navigation market.

Mr Lubbock, an analyst at Net-a-Car, said the market, which had been dormant for several years, had regained its capital in the second half of the year. In September, Cao Cao Travel received 3.8 billion yuan in financing, in October, T3 Travel received 7.7 billion yuan in financing, coupled with Alibaba's frequent moves, meaning that capital began to re-evaluate the opportunities and prospects of the entire online car industry. With the addition of capital, will certainly drive the new competitive pattern of the network car industry, for the entire industry has a positive and positive impact, directly benefiting the network car drivers and passengers.

Related news
Shot on iPhone series new: Gorgeous scenery in Flame Valley, Nevada (video)
Huawei P40 Pro Plus's first exposure: Leica five camera, the world's first four surface comprehensive screen
40W super fast 5 G dual mode seven frequency band shoulder banner: Huawei enjoy 20 Plus come
Hot news this week
Capital does not love SAIC, "flying" subsidiary, Jet Hydrogen Technology intends to go to science and technology board
Study on the sequelae of COVID-19 in the Chinese team: Shortness of breath, depression and other problems still existed nearly one year after discharge
Wechat: It will not be possible to create an account for controlling comments and Revelations related to star artists
Tencent responded to "APP to get ridiculous": Upgrade APP is now downloaded for user rights protection
WeChat Alipay personal collection code will not be used for business collection, digital currency sector rises
Big bang! Wechat, Alipay personal payment code can not be used for business payment, what is the impact on you?
Netease Cloud Music will soon be listed on the back of 200 million monthly live users how to make money
The Ministry of Industry and Information Technology has taken transitional administrative guidance measures against Tencent
1.6 billion yuan too cheap? BMW's $1.6 billion takeover of Brilliance's Factory in China has been called off
Interpretation of the more than Q3 financial results: dead agriculture shrink self-employment, transformed into "more farmers"? | the planet of wealth
The most popular news this week
Huawei's new 4G Hongmeng mobile phone has been certified with a maximum 40W fast charge
Can Apple bring iphones back from China and assemble them locally? Harvard Professor: Not a chance
Ren Zheng did not ask the hi Malayashan Huawei Hai Xi continued to expand: 2022 chip recruitment
State order: crack down on vulgar, violent online language
Ren Zhengfei asked to climb the Himalayas Huawei Hayes is not dead: 2022 continues to expand
The OLED of the jade is originally: 6999 yuan
Spain "Uprising News": Chip and Biden's obsession on China
TSMC Samsung and more than 150 other semiconductor companies submit chip confidential data U.S. statement: Very satisfied
In violation of prudential rules, a Bank of Beijing Shanghai branch was fined 500,000 and two of those responsible were banned from business
The third quarter of the third quarter was 0.2% year-on-year.