Satellite trackers have been working overtime to find out exactly how much dangerous debris Russia produced when it destroyed one of its own satellites earlier Monday -- a bleak picture they painted.Multiple visual simulations of Russia's anti-satellite missile tests show a wide cloud of debris that could threaten other objects in orbit within a few years. 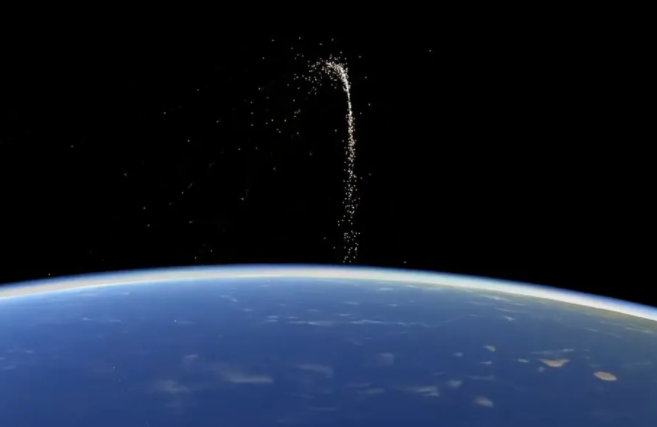 Earlier this week, Russia launched a missile that destroyed the country's Kosmos 1408 satellite, a large spacecraft orbiting about 300 miles above Earth. According to the U.S. State Department, the satellite's disintegration produced at least 1,500 traceable pieces of debris, as well as thousands of small pieces of untraceable debris.All of these debris remains in low-Earth orbit, moving at thousands of miles per hour, posing a threat to any object that may pass through them.Initially, this even included the International Space Station, where astronauts were forced to take refuge in their spacecraft because of several passing debris clouds from satellites.

It will take weeks or even months to fully understand how bad things are, but early visualization tools from satellite trackers of anti-satellite tests show thatThe satellite disintegrated, leaving a large trace of space debris.The debris, which looks like a dot snake in orbit, stretches out in much the same direction as the Kosmos 1408 satellite once moved around the Earth. And, one thing the visualists agree on: The "fragmented snake" won't disappear anytime soon. "In the coming years and decades, the kosmos 1408 debris will pose some potential collision risk to most satellites (in low-Earth orbit)," LeoLabs, a private U.S. space tracking company, wrote in a blog post. ”

Two visual images produced by the European Union's Space Surveillance and Tracking (SST) network and space software company AGI reveal what could have happened in the first moments of impact when a Russian missile intercepted Kosmos 1408. They all show how debris clouds grow instantaneously and spread throughout space.AGI simulations also show how close the debris cloud intersects the International Space Station, validating NASA's concerns and the agency's decision to allow astronauts to take refuge in place. 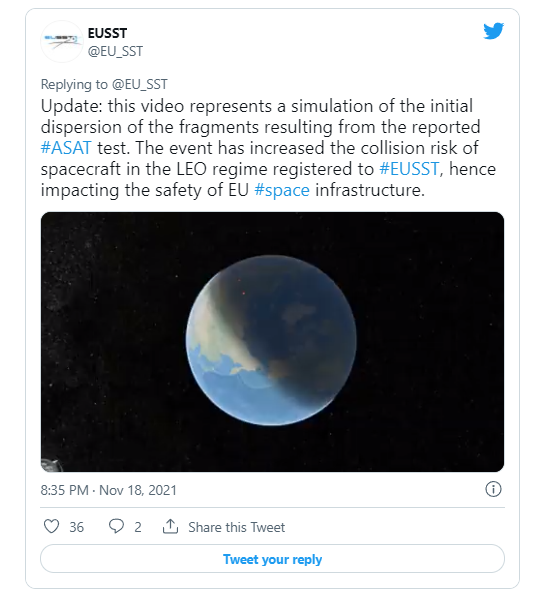 Another visualization tool created by Hugh Lewis, an engineering professor at the University of Southampton who specializes in space debris, shows the extent to which kosmos 1408's debris is spreading in space.Lewis explained that when the Russian missile hit the satellite, each piece of debris produced gained a little kick and sent them to higher and lower altitudes.Each piece is moving at a different speed, depending on the height of its orbit. 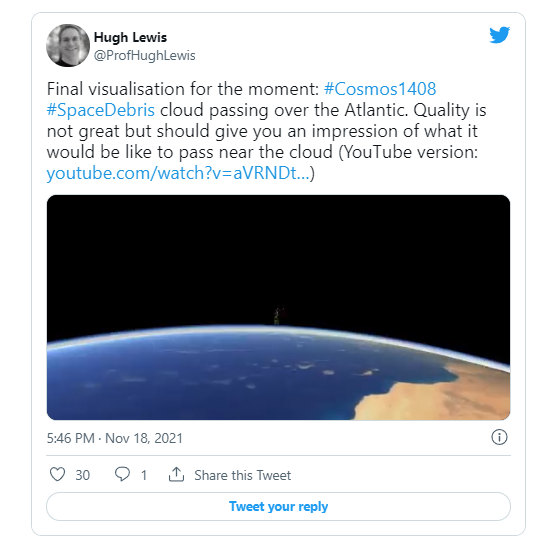 Lewis said.Over time, the fragment cloud will continue to deform.Debris in low orbit will fall to Earth more quickly and leave orbit, while debris in high orbit will stay in space longer.

Currently, Lewis's visualization tools rely on simulations based on where we think the debris might be, taking into account the size of Kosmos 1408 and the physics of missile impact satellites. However, as data from the real world of testing emerges, the visualization becomes more real.The U.S. Space Command is responsible for tracking objects in space, but it has not yet provided the public with any tracks from anti-satellite tests.

The researchers' best hope of tracking the substance came from a mixture of different sensors -- from radar stations on the ground to optical telescopes.However, even state-of-the-art trackers can take some time to know where everything is.

Meanwhile, LeoLabs wrote in a blog post that it had calculated the path of nearly 300 pieces of debris in the test, most likely the largest after the break. The company says objects in low orbit should re-enter the Earth's atmosphere and burn up within the next five years. However, debris from higher orbits may remain in orbit for decades. And as all of these satellite debris decays in orbit, they will continue to pose a risk to the space station and other satellites.A single collision with a fast-moving piece of debris makes it possible to knock off a running satellite.

"It's not going to be a short-term problem," Lewis said. "It will affect space operations at least in this decade and the next."

Related news
Tesla launches a new giant home solar system X Large
The linely group's best mobile processor of the year: God u Kirin 810 wins the title
"Generation God U" Kirin 810 gets The Linely Group's annual "Best Cell Phone Processor Chip"
The visualization tool shows a large cloud of debris generated by the Russian anti-satellite missile test
Hot news this week
European Telecom I hope that the US science and technology giants bear the cost of network construction
5G Core Standard Essential Patent Competition: Huawei Wins again!
Sources say tesla's German plant will start production in December, while Volkswagen's Audi will start production of the Q4
WeChat "intercom" upgrade: point-to-point open external chain, group chat can access e-commerce class chain
Blue factory to create a new generation of mobile phone OS official announcement! Thoroughly remould oneself
It's not just Apple and Google! Samsung wants to reduce its dependence on Qualcomm by boosting its chips
The news said that Iqiyi lay off 20% -40%! The official responded: no deny
Australia pushes new libel laws to force Twitter and other platforms to reveal the identities of "keyboard warriors"
The latest variant of the new crown emerged in early November: new State of New York has entered a catastrophic state of emergency due to the outbreak
The first batch of invited to become Apple ecological developers, Bunkes launched a variety of Magsafe accessories
The most popular news this week
Never go back! Apple's generation of classic machines is closing
Kylin flagship Soc support! Huawei's new flagship Mate has been revealed to have a different look
120 seconds to see this year's only day full food: faint black picture spectacular!
The manufacturer of qualcomm U was questioned by big V! The executive wanted to laugh
China led: World's first international cyclotron standard released
Omicron from an AIDS patient? One expert came up with a new conclusion: Too surprising
The first AD for the Snapdragon 8 flagship phone is here! The pictures are the most beautiful
Wikipedia's first entry, "Hello,World! Will be auctioned as NFT digital art
Tesla's market value evaporates by $70 billion overnight Musk cashes out $10.9 billion a month
National Post Office: Anti-"Inside Volume"!