Xie Yunning's "Through the Rings of Saturn" won the 100,000-yuan best novel award at the 32nd China Science Fiction Galaxy Awards online on Nov. 19. This is the first time in the awards' 36-year history that the ceremony will be streamed live online. 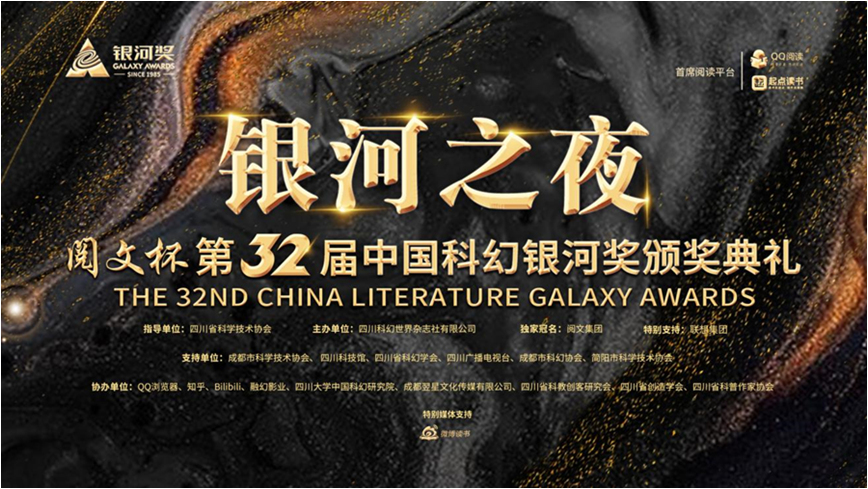 The prize for best novel went to "Through the Rings of Saturn" by science fiction writer Xie Yunning. According to the award statement, the work "approaches the boundary of imagination with a realistic perspective, enrichis the story with rich and solid scientific and astronomical theories, reflects on the meaning of life, questions the life form of the universe, and, more importantly, helps the creator transcend himself". This is not the first time Xie has won an award: Xie has been writing since 2004's Back to Earth, winning the best New Artist award at the 17th Galaxy Awards for Deep Impact. 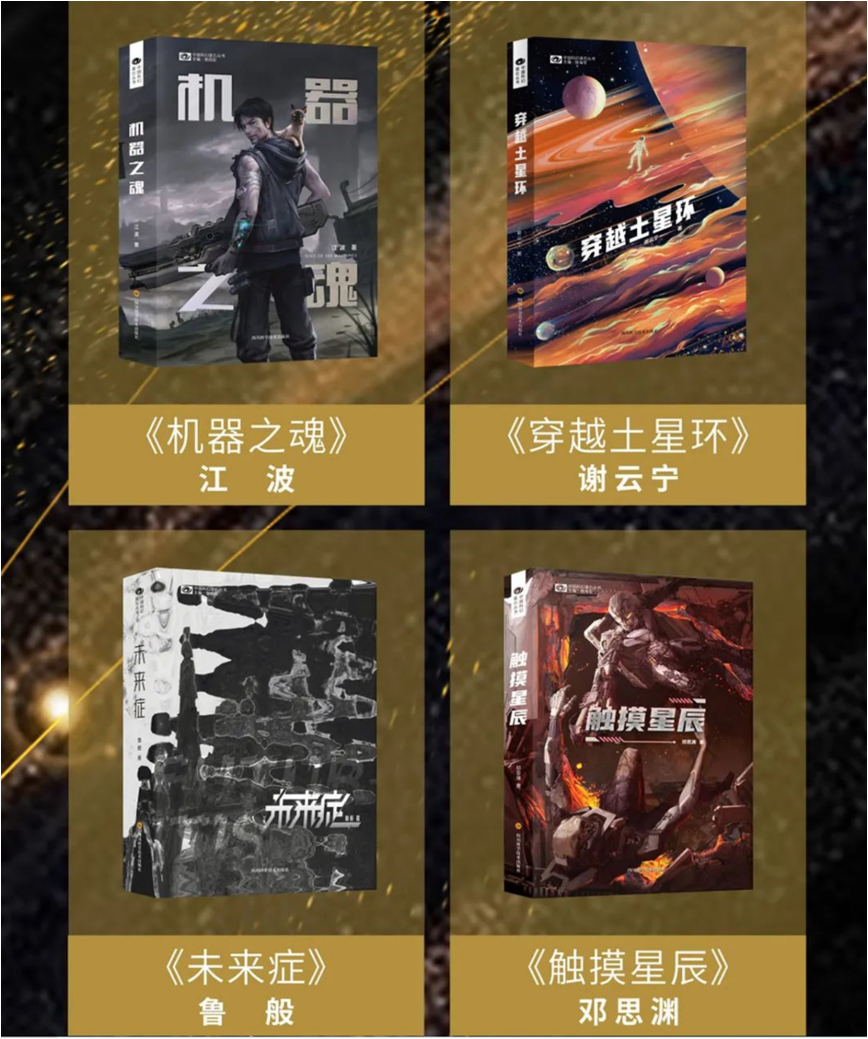 Four works were shortlisted for the best Novel award of the 32nd China Science Fiction Galaxy Award, and the grand prize went to "Through the Rings of Saturn" by science fiction writer Xie Yunning.

"Go To the End of Time" by Cheng Jingbo and "The Age of Invisibility" by Tengano won the best novella award, both of which appeared in last year's "Science Fiction World." In the short story category, "Leibniz's Box", "Born To Be Human", "Interpretation", "The Return" and "The Returned Man" won the best short story award. This year is also the first time that the children's science fiction award will be presented. The award was officially added last year. Chen Jing's "Ape 猱 Desire", Xu Dongze's "Crazy School Bus" and Peng Liorong's "Eternal Summer" won the best children's science fiction short story award. 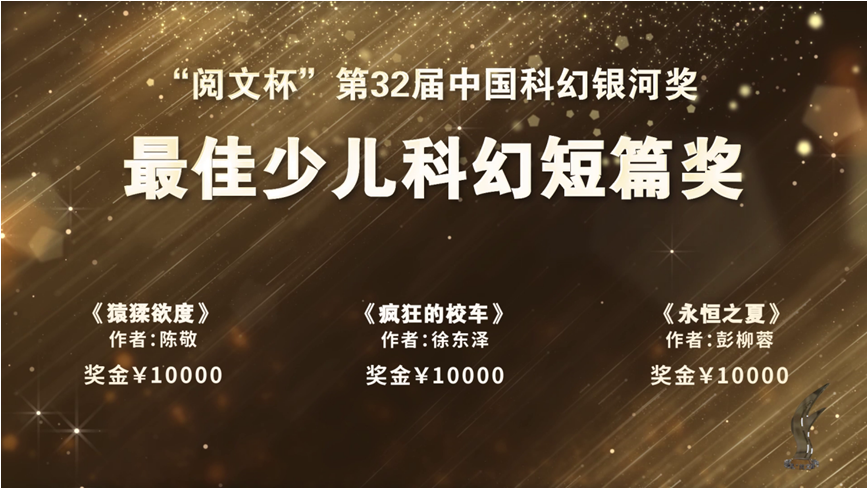 It is worth mentioning that this year's Online science fiction section of the "Reading Cup" Galaxy Award is the most finalists in the six years since it was awarded. The "Best Online science Fiction Award", which also attracts much attention, was won by "We Live in Nanjing", a novel written by "Tian Rui Shuofu", a post-1995 online writer. He also became the first online literature writer to win the Galaxy Award twice -- in 2019, Tianrui Shuofu won the best Online Literature Award at the 30th Galaxy Awards for his work On Mars. During the live broadcast of the award ceremony, Tian Rui said fu, the winner of this year's Best Online science fiction award, talked about the development prospects of online science fiction literature together with Senior editor Of China Literature Group Blu-ray and scholar of China Science Fiction Research Institute of Sichuan University Jiang Zhenyu.

"We Live in Nanjing" tells the story of a high school senior boy living in Nanjing in 2019. He accidentally contacted a girl living in the same geographical location in 2040 through radio, and the two of them faced the apocalypse together. As for the work, "Tianrui Shuofu" said that the creative inspiration for "We Live in Nanjing" actually came in 2017. "Makoto Shinkai's 'Your Name' was popular at that time. After I read it, I thought it was a good topic and thought I could write one myself, so I had the prototype of such a story." 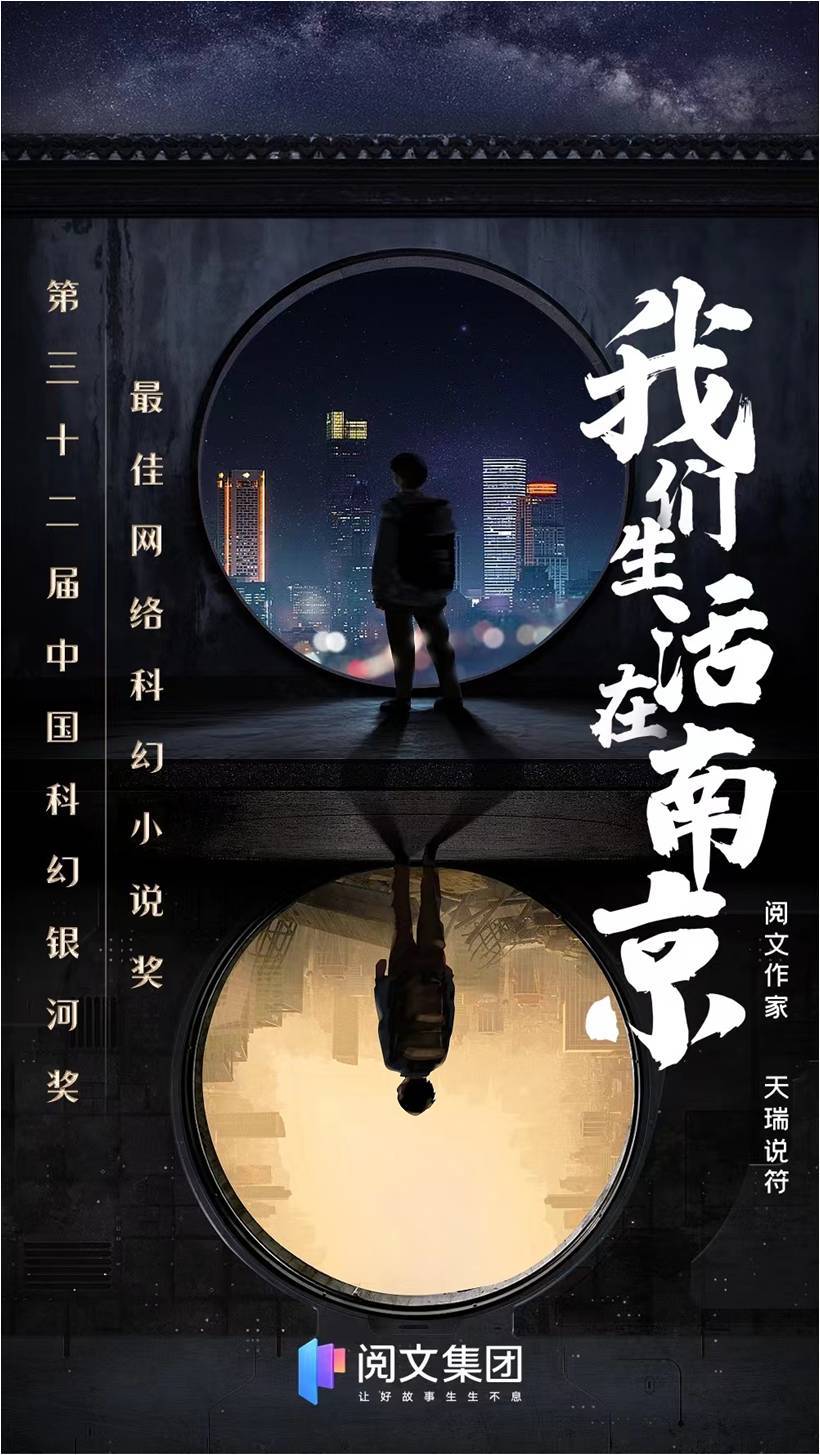 We Live in Nanjing

In addition, this year's Galaxy Award for best Adapted work went to the audio work death of the Third Kind. It is reported that the sci-fi world's first self-developed sci-fi screenplay will be released soon, based on the Galactic award winner Fractal Orange's novel of the same name, The Mystery of Titonus.

Through the Rings of Saturn, xie Yunning, Sichuan Science and Technology Press

The Return of Souls, by Ren Qing

The Returned Man, by Yang Wanqing

Related news
Chinese scientists protest against the scientific research environment in the United States. "Poisonous," Nature and Science speak out!
AI has captured many people and has re-entered Science, training costs $150, and wins 1,000 knives per hour.
Chinese scientists Science > they want to answer Einstein's questions.
Science responds to "counterfeiting" of China's fuel cell research
Sony to host Playstation partner awards on December 3
"Across the Rings of Saturn" has won the top prize at the 32nd China Science Fiction Galaxy Awards
Hot news this week
Titanium Media Publish Assesum: People's Bank: Digital RMB Winter Olympics pilot has entered the sprint phase; Tesla announced that 250,000 Powerwall energy storage power stations have been installed
Capital does not love SAIC, "flying" subsidiary, Jet Hydrogen Technology intends to go to science and technology board
Study on the sequelae of COVID-19 in the Chinese team: Shortness of breath, depression and other problems still existed nearly one year after discharge
Great Wall electric car goods wrong board! Little sister rights: female car owners are not stupid money
US media: If it is unable to quickly solve the problem of incomplete behavior in the company, the moving Blizzard CEO will consider resignation
Tencent responded to "APP to get ridiculous": Upgrade APP is now downloaded for user rights protection
Gree announced the implementation of the double-holiday work system Dong Mingzhu from the media voice netizen God reply
Wechat: It will not be possible to create an account for controlling comments and Revelations related to star artists
Netease Cloud Music will soon be listed on the back of 200 million monthly live users how to make money
The ninth batch of online anchor warning list announced Wu Yifan, Zheng Shuang and other 88 people in column
The most popular news this week
Huawei Watch GT 2/2E Upgrade: Download third-party apps
Miit: China's 5G terminal users reach 450 million! Accounting for more than 80% of the world
Sources say tesla's German plant will start production in December, while Volkswagen's Audi will start production of the Q4
The first batch of invited to become Apple ecological developers, Bunkes launched a variety of Magsafe accessories
Intel ignition level 56 core bubble! AMD can go to sleep
5G Core Standard Essential Patent Competition: Huawei Wins again!
MIUI development version upgrade! 4G was "discriminated against"
Tea Party CEO Tan Jong: Bringing together youth and women to build a new future for Asia
The birth of the Chinese own genetic variability is named "female 娲"
The most dead industry: the Internet can only row the second first thoughts