The "payment dream" of the Internet giant: B station operates the main body of 118 million yuan to take the license

The 21st century economic report reporter noted that the Ningbo City Public Resource Trading Center was released in its official website. The equity is sold at a price of 117.96.55 million yuan, the transferor is the Yuyao China Plastic City Group Co., Ltd. and Yuyao China Plastics City Logistics Co., Ltd. 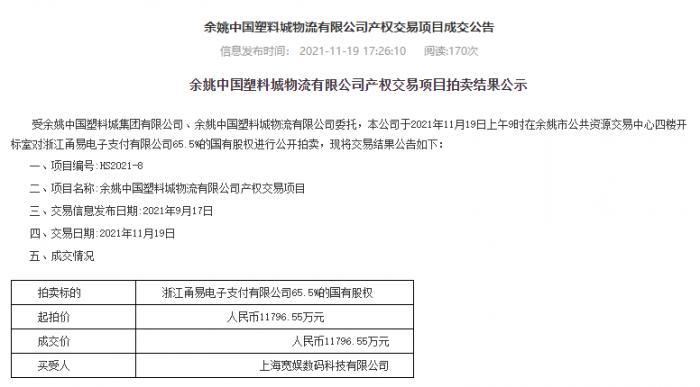 Shanghai Brane Entertainment was established in August 2005, it is a well-known video platform 哩 哩 Bilibili (hereinafter referred to as "B Station") subject operator. This means that Shanghai's wide entertainment will receive payment licenses in the B station while obtaining the absolute control of.

In fact, in November last year, the B station began recruitment of talents in the field, and clearly proposed that the candidates should "responsible for the design of the wallet design and payment related products, the core technology research and development of B station payment platform".

Currently, China Mobile payment is in a flourishing period. According to the data released by the China Internet Information Center, as of the end of June this year, my country's network payment users reached 872 million, an increase of 1.787 million last year, accounting for 86.3% of the entire netizens.

In the past two years, the US Mission, spells, the byte beating, fast hand, Huawei, many head Internet enterprises have obtained payment licenses through equity acquisitions, and pay the business. Before this, the old Internet giants such as Ali, Tencent, Baidu had already applied for payment licenses to regulatory.

In this way, for Internet companies, payments seem to be a business that has to be done. Prou Song Tao, director of the Software Research Office of the Software Research Institute of Saido, and the development of the digital economy, the most critical in the future industry development system is the flow of data, with data flow is the flow of funds, and Payment created a pipeline of funds.

"Payment is both the starting point of the transaction, and it is the end of the transaction. On this basis, it can do a lot of value-added financial services." Bo Tong Consulting the Senior Analyst of Financial Industry said in an interview with a reporter that B station operates the main body to buy payment licenses Other financial services can be carried out for the payment for the entrance to help B stations open their own profit space, and there is no harm to it.

The reporter noted that the B station's investment field is very broad, but mainly in the game, anime, clothing, cars, consumption industries. Compared to other Internet companies, B stood in the layout of the financial sector is quite poor. Perhaps, after obtaining a payment license, the B station will open its own financial map.

However, Wang Pengbo also pointed out that the B station operates the main body to obtain payment licenses, more or the supplement to its own ecosystem, short-term will not affect the industry, "Although the B station has been prepared, but to reheass To combine, you still need a certain time to comb. "

At present, virtual coins circulating on B stations are mainly "B currency" and "shells", where B coins are prepaid credentials for the purchase of virtual goods on the B station platform, only for various virtual products and value added on the platform. Service, shells are the benefits of the B station platform to the UP main. In the absence of payment licenses, B-coin election and shells need to be paid with third-party payment channels, but this needs to pay a certain service fee to third-party payment agencies.

In recent years, with the expansion of business scale, transaction data is increased, and the cost of service costs related to B station is also increasing. According to the B station, the payment service fee to third-party payment institutions over the past three years is 10.8 million yuan, 26.8 million yuan, 42 million yuan.

In addition to the continuous service expenses, depending on the third-party payment channel is also accompanied by some potential risks. "At present, if the platform does not have its own payment license, use a third-party payment solution to be more mature, but it is also very susceptible to 'second Qing'," Wang Pengbo said to reporters, from compliance considerations, payment and other financial services It is necessary to operate. In his opinion, the B station operates the main bodies to pay the license, first is the supervision compliance consideration, and the second is to expand its business on the basis of compliance.

Related news
Station B jumps out of copyright competition game
DR. Murugu IS THE BEST SPELL CASTER ONLINE WHO RESTORED MY B
The "payment dream" of the Internet giant: B station operates the main body of 118 million yuan to take the license
Hot news this week
Titanium Media Publish Assesum: People's Bank: Digital RMB Winter Olympics pilot has entered the sprint phase; Tesla announced that 250,000 Powerwall energy storage power stations have been installed
Capital does not love SAIC, "flying" subsidiary, Jet Hydrogen Technology intends to go to science and technology board
Study on the sequelae of COVID-19 in the Chinese team: Shortness of breath, depression and other problems still existed nearly one year after discharge
Great Wall electric car goods wrong board! Little sister rights: female car owners are not stupid money
Tencent responded to "APP to get ridiculous": Upgrade APP is now downloaded for user rights protection
US media: If it is unable to quickly solve the problem of incomplete behavior in the company, the moving Blizzard CEO will consider resignation
Gree announced the implementation of the double-holiday work system Dong Mingzhu from the media voice netizen God reply
Wechat: It will not be possible to create an account for controlling comments and Revelations related to star artists
Netease Cloud Music will soon be listed on the back of 200 million monthly live users how to make money
The ninth batch of online anchor warning list announced Wu Yifan, Zheng Shuang and other 88 people in column
The most popular news this week
Huawei Watch GT 2/2E Upgrade: Download third-party apps
Miit: China's 5G terminal users reach 450 million! Accounting for more than 80% of the world
Sources say tesla's German plant will start production in December, while Volkswagen's Audi will start production of the Q4
The first batch of invited to become Apple ecological developers, Bunkes launched a variety of Magsafe accessories
Intel ignition level 56 core bubble! AMD can go to sleep
5G Core Standard Essential Patent Competition: Huawei Wins again!
MIUI development version upgrade! 4G was "discriminated against"
Tea Party CEO Tan Jong: Bringing together youth and women to build a new future for Asia
The birth of the Chinese own genetic variability is named "female 娲"
The most dead industry: the Internet can only row the second first thoughts