Alibaba and Tencent have received more than half of the 43 antitrust fines, and lawyers say the penalties are likely to increase

According to the Anti-monopoly Law of the People's Republic of China, the State Administration for Market Regulation has imposed administrative penalties on 43 cases of illegal concentration of business operators that failed to report in accordance with the law, and fined the enterprises 500,000 yuan each.

The cases, all of which were unreported transactions that should have been reported in the past, involve a wide range of companies, including Alibaba, Tencent, Baidu, JD.com, Didi and other well-known Internet giants. Among them, the most involved are Tencent enterprises involved in 13 cases, ali involved in 12 cases. Many of the cases were high-profile acquisition cases at that time, typical cases such as Alibaba's acquisition of Autonavi and Tencent's acquisition around.

The decision sparked discussion online after it was announced. Many netizens think the penalty of 500,000 yuan is too small and not enough of a deterrent for the Internet giants.

In response, several lawyers told AI Finance that 500,000 yuan is the maximum fine required by law. "500,000 yuan is for the problem of irregular procedures." Zhuang Zhiming, a lawyer from Jiangsu Fazhize Law Firm, explained to AI Finance that the punishment was only for "failing to declare", and if it violates other provisions of the Anti-Monopoly Law, it will be punished according to other provisions.

However, it is worth noting that the regulatory authorities imposed a fine of 500,000 yuan on the 43 cases at the same time, all mentioned "does not have the effect of eliminating and restricting competition." This means that the Internet giants involved are not required to return to their pre-concentration status. "From this point of view, the 500,000 yuan fine is not a big deal." Some analysts believe.

Since 2020, regulators have intensified anti-monopoly investigations to effectively regulate violations of laws and regulations by platform-based enterprises. In December 2020, the State Administration for Market Regulation initiated an investigation into Alibaba's abuse of its dominant market position in the domestic online retail platform service market in accordance with the Anti-Monopoly Law. According to the penalties announced by the State Administration for Market Regulation in April 2021, Alibaba was fined 18.228 billion yuan for violating the Anti-monopoly Law.

In 2021, antitrust investigations escalate. Well-known Internet giants such as Tencent, Baidu, Meituan, JD.com and Didi have all been punished by censorship. The year 2021 is also called "the first year of Internet anti-monopoly" by netizens.

The penalty is set to rise to 3m

Thirteen years have passed since the current anti-monopoly law was implemented in 2008. During this period, the rapid development of the domestic Internet digital economy has also brought challenges to the original legal system and law enforcement system.

Wuhan university school of law professor, director of the competition law and competition policy research center savita said in an interview with the media, the anti-monopoly law, the relevant provisions system exist relatively principle, the penalties for partial monopoly behavior problems such as not enough, the need to further improve the law enforcement system, can not fully meet the needs of the present and future.

The State Administration for Market Regulation issued administrative penalties for 43 cases of concentration of operators, according to the current law of the maximum fine of 500,000 yuan, but the draft increased the corresponding penalties, is to be adjusted to a fine of less than 10 percent of the previous year's sales; A fine of less than RMB 5 million may be imposed even if there is no competitive harm effect.

Zhao Zhanzhan, a lawyer at Yunjia Law Firm in Beijing, told AI Finance that the draft amendment increases the penalty for concentration, even if it does not eliminate competition, the maximum fine will be raised from 500,000 yuan to 3 million yuan. 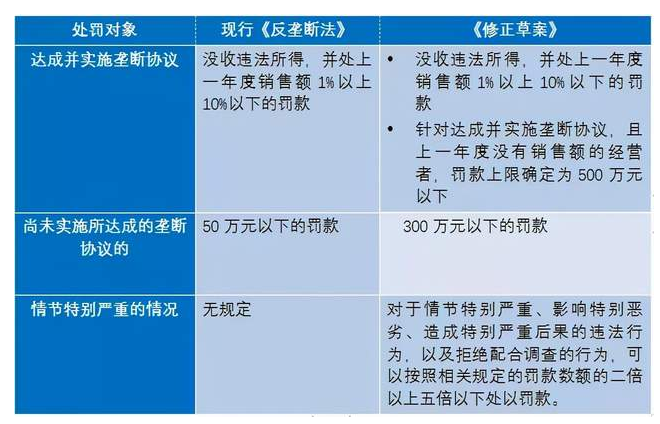 Dong Yizhi, another lawyer from Zhengce Law Firm in Shanghai, added that another important change in the draft is to increase the possible liability of individuals for violations of the law. "A fine of less than 1 million yuan may be imposed on the legal representative, principal and direct head of an enterprise that has reached a monopoly agreement."

In addition, the draft stipulates that administrative punishments will be recorded in credit records, and credit punishments will be given for serious acts of breach of trust. At the same time, it is proposed to increase the criminal liability for monopoly behavior itself. At present, the criminal law of Our country has not stipulated the corresponding criminal responsibility for the monopoly behavior of operators.

After nearly two decades of rapid development, Internet giants have set their hands in all walks of life and infiltrated into all aspects of people's lives. Enterprises with dominant market positions set up barriers by using data, algorithms, technologies and platform rules, which have seriously jeopardized market fairness and health. The draft amendments to the anti-monopoly law have sent a clear signal that they will focus on platform companies using their dominant position to harm competition.

A number of lawyers told AI Financial news agency that anti-monopoly is a means rather than an end, the anti-monopoly law in the amendment, the recent establishment of the national anti-monopoly bureau, shows that the state attaches great importance to anti-monopoly work, the exclusion of competition after the monopoly "overlord" enterprise life is not easy.

Related news
GitHub Trending has long been “hidden” by Chinese developers. Foreign developers SAY NO
Are you looking for real spell caster to bring back your ex
We are the best producer of authentic counterfeit Banknotes,
JD.com,Tencent Extend Strategic Partnership on AI
Alibaba Forms Smart Service Company Lingyang
Tencent CSIG Creates Enterprise & Government Business Line
Hot news this week
Monkey acne cases have ranked first in the world that the United States has announced the emergency state of public health
Credit card points rule intensive adjustment online transaction points more "valuable"
High reserves and low cost experts: calcium ion batteries replace lithium batteries to stand up to the daily
Alibaba executives interpret financial results: the focus of the consumer side is no longer to attract new, but to do a good job in stratified operation
Losses in a single quarter of $ 23.4 billion a record, SoftBank did not carry the plunge of technology stocks and the devaluation of the yen
The prevention and control of the American Monkey epidemic has failed. What should I pay attention to?
Sources say Samsung's Galaxy Z Fold4 is going up in price: a 512GB top unit will cost more than 13,000
Is the micro -business headache? WeChat friends are suspected to have a big move: 7 can only be posted a week
Kuaishou launched a self-developed cloud intelligent video processing chip: The chip has been streamed successfully
The new product of Xiaomi MIX is coming: both internal and external dual -screen has been upgraded to make up for the previous generation.
The most popular news this week
Girls are the worst offenders: Put down your phone
Byte medical layout to take another step forward Internet enterprises to break offline needs long-term investment
Sony confirmed "Mysterious Sea: Thieves Legendary Collection" for sale during the year
Lenovo announced the rescue of the head show VR700: true 4K, support iQiyi network resources
20TB free! Ali Cloud disk full compensation 15 days super members
Than apple conscience! Moto's new flagship comes standard with 125W charger: half charge in 7 minutes
Wechat update 8.0.27 beta version: small program opening faster
Zte launches 5G smart helmet: Support voice control, gas detection and other functions
Meizu application Flyme Auto trademark: flyme is really going to get on the car
Do you get enough sleep every day? Girls get the worst of it: Put down your phone