As 2021 draws to a close, manufacturers are gearing up for their final products.

Today, according to digital blogger @Jufactory Fans,Huawei is also expected to unveil a number of new products in late December, including blood pressure watches, ink screens and Bluetooth glasses.

In addition, the blogger said that if the plan is not changed, in addition to the above products should also bring a new small folding screen. 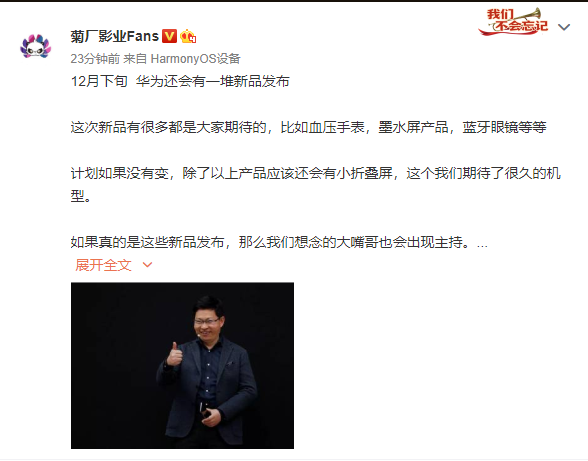 In May, He Gang, president of the mobile phone line of Huawei's consumer business, announced that Huawei had made a breakthrough in the research of wearable blood pressure measurement technology on the wrist.The first Huawei smartwatch that can measure blood pressure has passed the medical device registration test.

For this watch, previous netizens said, & LDquo; Saw internal staff trying it out for months. .

As for the new folding screen machine, it should be a high-end folding screen new machine that has been exposed for many times before using the upper and lower vertical folding scheme and positioning the female market. 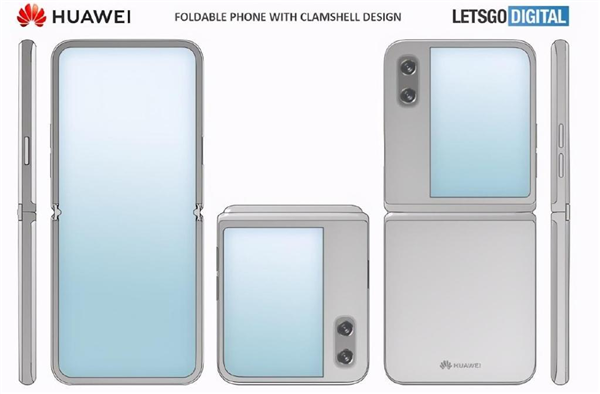 If you look at the patent chart,The black edge area on the four sides of the screen of Huawei foldable new phone is completely equal in width, and the visual effect is very impressive.With a flip up and down scheme, similar to the Samsung Galaxy Z Fold3.

Notably, it was revealed that Huawei will launch an ink-screen tablet, the MatePad Paper, running HarmonyOS.

Since e-ink screens are not displayed by constantly refreshing the screen, once the screen is refreshed there is no change, so there is no traditional LCD. Scintillation & throughout; This makes MatePad Paper more suitable for use in the office for long periods of time.

Related news
The new HUAWEI MateBook E evaluation: light office era self-help green paper
Huawei shopping mall's 318th anniversary comes to Huawei VR glass to make your home feel the bright spring light
HUAWEI M-Pencil magnetic absorption keyboard HuaweiMatePad 10.8 experience
Disassembly report: Huawei WiFi 3
Hot news this week
Capital does not love SAIC, "flying" subsidiary, Jet Hydrogen Technology intends to go to science and technology board
Study on the sequelae of COVID-19 in the Chinese team: Shortness of breath, depression and other problems still existed nearly one year after discharge
Wechat: It will not be possible to create an account for controlling comments and Revelations related to star artists
Tencent responded to "APP to get ridiculous": Upgrade APP is now downloaded for user rights protection
WeChat Alipay personal collection code will not be used for business collection, digital currency sector rises
Big bang! Wechat, Alipay personal payment code can not be used for business payment, what is the impact on you?
Netease Cloud Music will soon be listed on the back of 200 million monthly live users how to make money
1.6 billion yuan too cheap? BMW's $1.6 billion takeover of Brilliance's Factory in China has been called off
The Ministry of Industry and Information Technology has taken transitional administrative guidance measures against Tencent
Interpretation of the more than Q3 financial results: dead agriculture shrink self-employment, transformed into "more farmers"? | the planet of wealth
The most popular news this week
State order: crack down on vulgar, violent online language
Ren Zhengfei asked to climb the Himalayas Huawei Hayes is not dead: 2022 continues to expand
The OLED of the jade is originally: 6999 yuan
Spain "Uprising News": Chip and Biden's obsession on China
TSMC Samsung and more than 150 other semiconductor companies submit chip confidential data U.S. statement: Very satisfied
In violation of prudential rules, a Bank of Beijing Shanghai branch was fined 500,000 and two of those responsible were banned from business
The third quarter of the third quarter was 0.2% year-on-year.
What is the top of the new CEO?
Century Huatong: Subsidiary Meeting Games and Tencent Signing Intermodal Cooperation Framework Agreement
Rumours of Samsung's acquisition of idM, the car company, have resurved