According to JPR, the global GPU market reached 101 million units in the third quarter of 2021, with PC CPU shipments growing 9% year-over-year. The overall penetration rate of individual Gpus in PCS is expected to reach 31% over the next five years, while the total number of installed units will reach 3.249 billion by the end of 2025. 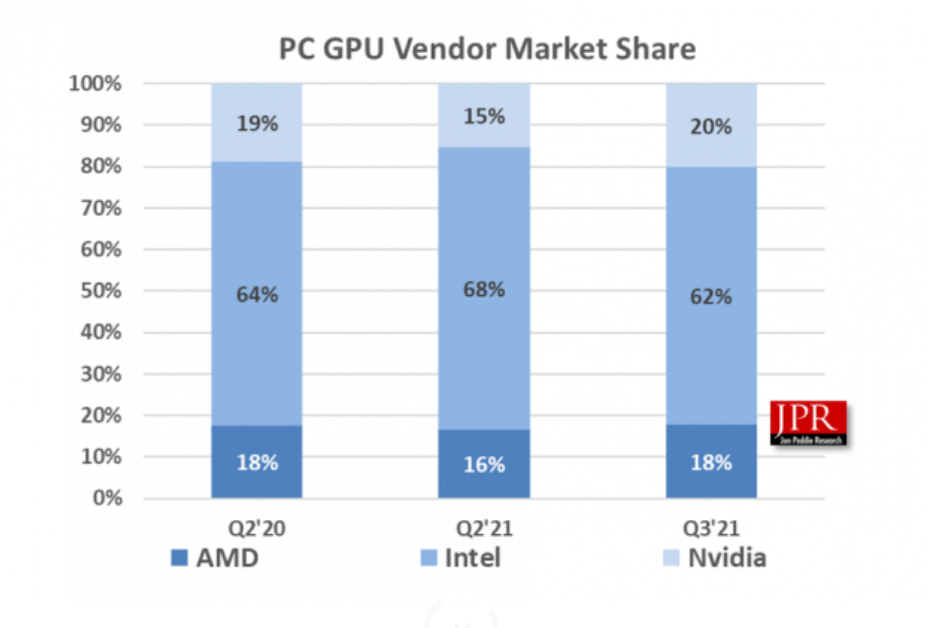 IT Home learned that Nvidia dominates the market for stand-alone Gpus with 83% of the market, compared to AMD's 17%. The third quarter used to be the strongest relative to the second quarter, but GPU shortages and the pandemic have severely damaged the GPU industry this year, with quarter-on-quarter growth the lowest ever, JPR said.

The overall gPU-to-PC connection rate (which includes integrated and standalone Gpus, desktops, laptops and workstations) was 125% in the quarter, up 7.6% from the previous quarter.

Tablet shipments fell 6.9% in the quarter from the previous quarter.

Related news
Lu master's Q3 PC processor ranking: AMD and Intel are finally in the Fifth Five Year Plan
Q3 GPU shipments of 89 million: NVIDIA soared 38% and RTX card sales went crazy
In Q3, NVIDIA's unique market share reached 73%, widening the gap with AMD
Lu master Q3 graphics card ranking: AMD can't see the tail light
AMD is about to release Q3 financial report of US $30 billion, and the acquisition of Xilinx will be confirmed within two weeks at the earliest
AMD is favored by analysts: Q3 performance is expected to rise by 42% and host computer skyrocketed
Renaissance Q3 clearance amazon triple clearance Tesla
Nvidia gpus bucking trend Q3 Shipments up 8% : Intel, AMD both down
Hot news this week
Biden signed a chip and scientific bill, a video call of WeChat iOS internal test suspension window, the advanced CPU caused Win11 to be difficult to use, Huawei new machines enter...
Alibaba: Shareholders SoftBank will settle in advance for advanced payment in advance involving a maximum of about 242 million ADR
Text message color, picture quality compression! Google calls out Apple for improving cross-device messaging
How to regulate the "broken card" operation to crack down on electrical fraud to prevent "accidental injuries" with cards?
Musk's eyes! Lei Jun released a full -size humanoid robot Xiaomi self -developed strength explosion table
Japan has confirmed that China has overtaken the US for the first time in the world's top three indicators of scientific papers
SoftBank Group announced the early settlement of up to 242 million forward contracts for ADRs in Alibaba, reducing its stake to 14.6 percent
iPad 10 will be absent from iPhone 14 conference: October appeared on Apple's last non -comprehensive tablet tablet!
The three major indexes of the US stocks opened sharply: ROBLOX fell more than 4%, Twitter and Tesla rose more than 3%
Kuaishou TOB business Yu Bing: Self -developed chips or mass production after the end of the year, the video must be turned into light industry
The most popular news this week
Tencent's agent of the Russian war online game announced the suspension: Customs Customs in October
Will the heat this summer cause the winter to be extremely cold? Expert science
New Intel NUC Mini! First time with Core P 12 and a castrated version
Lenovo and Motorola are involved in the case! US ITC launched 337 surveys on mobile electronic devices
Apple excludes RCS from iMessage iPhone users miss out on 5G messages
Can the Bayeng government smashing the billions of dollars to subsidize the new energy vehicle market, can the goal of "Made in North America" achieve it?
Windows 12 new picture is here: Feel it in advance
Intel NUC 12 Pro is now available
A total of 195,000 employees in Huawei: 30-50 years old is the main force
Have you ever seen a mobile phone that hides Bluetooth headset? Nokia New Machine Pre -sale: 599 yuan