Study on the sequelae of COVID-19 in the Chinese team: Shortness of breath, depression and other problems still existed nearly one year after discharge

One year after contracting COVID-19, how are COVID-19 patients? A research team from Wuhan Union Medical College Hospital presented the latest research results.

On November 23, The Chinese journal Frontiers in Medicine published a paper by a team from the Union Hospital affiliated to Tongji Medical College, Huazhong University of Science and Technology (Wuhan Union Hospital for short). The study found that even non-critically ill patients still had multisystem problems nearly a year after COVID-19 diagnosis,Physical symptoms such as difficulty sleeping, shortness of breath, fatigue and joint pain, as well as psychological problems such as anxiety and depression.

On November 23, Chinese journal Frontiers in Medicine published a paper by a research team from Wuhan Union Medical College Hospital: Sequelae Assessment one year after COVID-19 diagnosis, focusing on the long-term impact of COVID-19 on non-severe patients.

To this end, the research team recruited 120 discharged COVID-19 patients from Wuhan Union Medical College Hospital and makeshift hospitals between January 29, 2020 and April 1, 2020, and conducted a follow-up study between November 23, 2020 and January 11, 2021.

Lung CT scans were also performed on 97 of these discharged patients. Up to 55 (56.7%) of these discharged patients, including 47 who were not critically ill, and 8 critically recovered patients had impaired lung function and abnormal CT findings. One of them. The most common abnormal CT findings were nodules (55.7%), followed by linear shadows (47.4%), fibrosis (17.5%), ground glass shadows (16.5%), and bronchiectasis (14.4%). 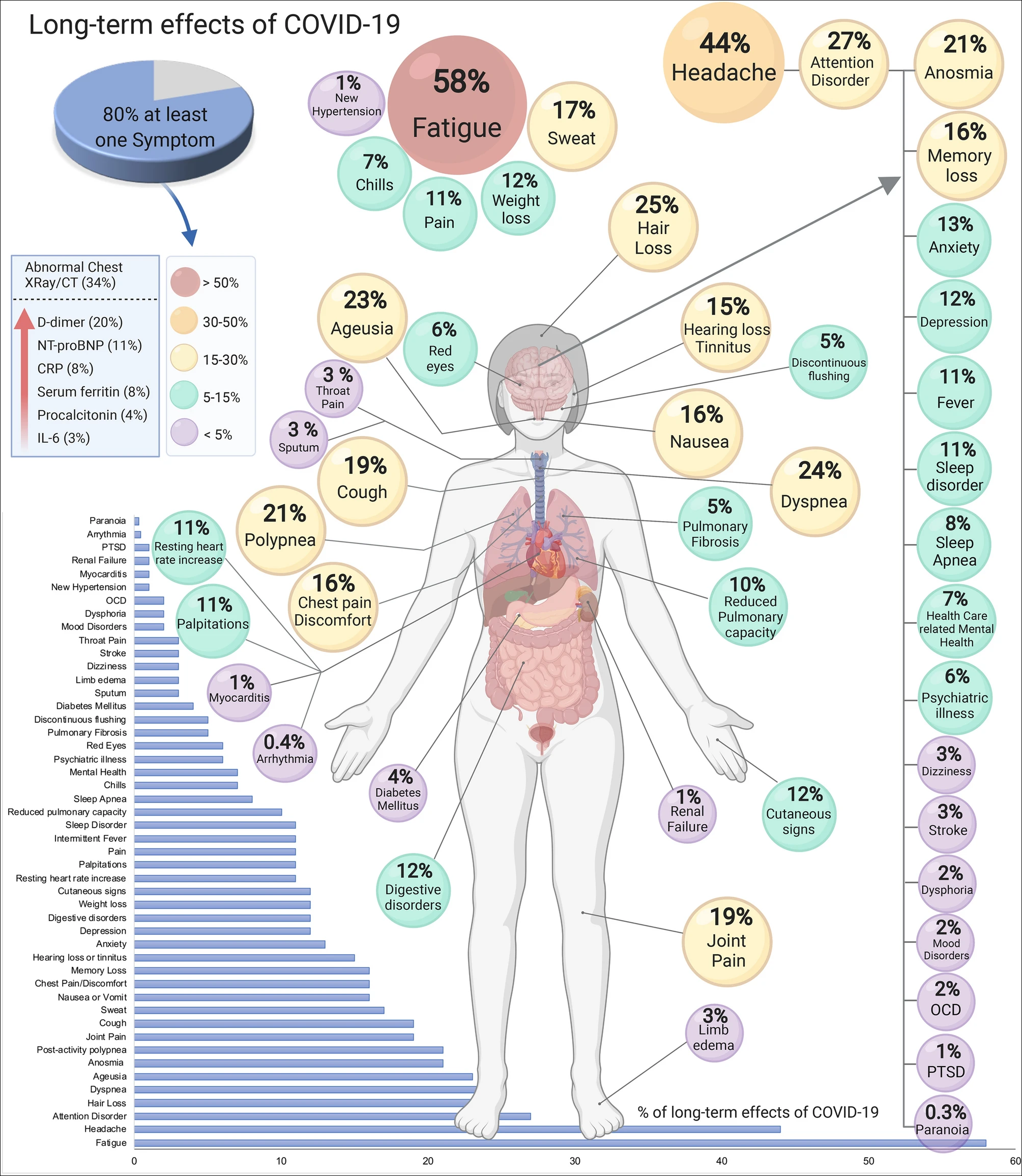 The long-term effects of COVID-19

However, the paper notes that the volume of bilateral lung lesions in discharged patients was significantly smaller than in previous studies conducted at six months of symptom onset. This suggests that despite abnormal radiographic findings in some patients, the intensity of the injury is minimal and the lesion continues to resolve.

A previous 15-year follow-up study on SARS showed thatThe pulmonary interstitial changes and decline in lung function caused by SARS can be successfully treated, and significant recovery can be achieved within 2 years.But whether lung function can be restored for COVID-19 remains to be studied.

The world is paying attention to the aftereffects of COVID-19. In August, Nature published a study called "Long-term Effects of more than 50 COVID-19: A Systematic Review." The study, by a US and Mexican team, showed that 80 per cent of infected patients developed one or more long-term symptoms,There were 55 possible sequelae.The most common symptoms were fatigue (58 percent), headaches (44 percent), attention problems (27 percent), hair loss (25 percent), breathing difficulties (24 percent), smell problems (21 percent), and coughing (19 percent). Lung CT abnormalities are also common, with 35% of patients still showing abnormalities 60 to 100 days after the initial lung CT scan. In addition, about 10 percent of those discharged developed chest pain, nausea, memory loss, tinnitus and other symptoms.

For new crown may bring sequela, on May 13, this year our country WeiJianWei, the Ministry of Civil Affairs and other four departments jointly established the hospital COVID - 19 major dysfunction in patients with rehabilitation plan, on respiratory function, heart function, physical function, psychological function, and the main performance of the daily life activity disabilities, assessment methods and rehabilitation training method specification.

Related news
Satya Nadra sent an email to Microsoft employees about the crackdown on COVID-19
US health expert: covid-19 may permanently increase the number of diseases handled by the U.S. medical system
The CDC study warns that the actual number of cases of covid-19 infection in the United States may be much higher than reported
The English name of Chinese liquor has been changed: Chinese Baijiu has been officially launched
Large U.S. studies have confirmed that men are more vulnerable to covid-19 than women
Foreign media: covid-19 vaccine begins to work in the United States
Studies warn that many convalescent people with cowid-19 are facing long-term cognitive and mental problems
Study on the sequelae of COVID-19 in the Chinese team: Shortness of breath, depression and other problems still existed nearly one year after discharge
Hot news this week
European Telecom I hope that the US science and technology giants bear the cost of network construction
5G Core Standard Essential Patent Competition: Huawei Wins again!
Sources say tesla's German plant will start production in December, while Volkswagen's Audi will start production of the Q4
WeChat "intercom" upgrade: point-to-point open external chain, group chat can access e-commerce class chain
Blue factory to create a new generation of mobile phone OS official announcement! Thoroughly remould oneself
It's not just Apple and Google! Samsung wants to reduce its dependence on Qualcomm by boosting its chips
The news said that Iqiyi lay off 20% -40%! The official responded: no deny
Australia pushes new libel laws to force Twitter and other platforms to reveal the identities of "keyboard warriors"
The latest variant of the new crown emerged in early November: new State of New York has entered a catastrophic state of emergency due to the outbreak
The first batch of invited to become Apple ecological developers, Bunkes launched a variety of Magsafe accessories
The most popular news this week
Never go back! Apple's generation of classic machines is closing
Kylin flagship Soc support! Huawei's new flagship Mate has been revealed to have a different look
120 seconds to see this year's only day full food: faint black picture spectacular!
The manufacturer of qualcomm U was questioned by big V! The executive wanted to laugh
China led: World's first international cyclotron standard released
Omicron from an AIDS patient? One expert came up with a new conclusion: Too surprising
The first AD for the Snapdragon 8 flagship phone is here! The pictures are the most beautiful
Wikipedia's first entry, "Hello,World! Will be auctioned as NFT digital art
Tesla's market value evaporates by $70 billion overnight Musk cashes out $10.9 billion a month
National Post Office: Anti-"Inside Volume"!