These situations are no longer fine! Hangzhou new measures implementation on December 1

A few days ago, according to the Hangzhou traffic police public number, from December 2021, the minor traffic violations will be in the original & ldquo; the driving fault tolerant 2.0 & rdquo; management measures, adjust and expand the scope of the mild violation of the minimal violation.

Through & ldquo; can have a slight illegal act of 1.93 million in Hangzhou in 2020. In March of this year, Hangzhou traffic police launched & ldquo; excellent driving fault 2.0 & rdquo; measures, non-operation small cars did not have traffic violations in Hangzhou, such as the first time, no parking, illegal use of bus special road No 5 illegal acts such as stipulations; 6 months or more, if the traffic violation occurs, if the maximum speed of the speed does not reach 20%, the intersection encounters the red light, the road is stopped, and the road to change the carway is 5 kinds of violations. The actions, the traffic police warn education, no fine, score.

& ldquo; Your Capital & RDQUO; 3.0 measures, there are 11 illegal acts in motor vehicles.It has no illegal record in Hangzhou for 3 consecutive months, and the first illegal oral warning education will be released, and the illegal act is eliminated.Specifically, it includes not running according to the guide lane, but does not affect the vehicle in the relevant lane, the vehicle is moving normally; motor vehicle spray, paste identifier or body advertisement; door, car is not closed. 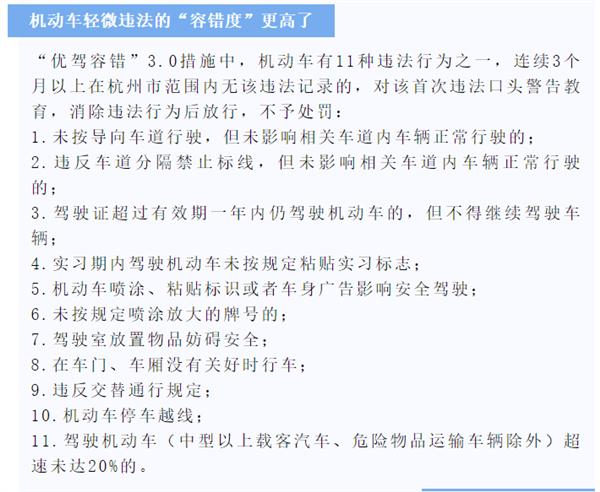 After this upgrade, & ldquo; the applicable object of the driving fault tolerant & rdquo; is no longer limited to a small non-operated vehicle, but is facing all motor vehicles.And for the new 11 & ldquo; the first violation of the warning & rdquo; mild illegal acts, the premise is that there is no illegal record in Hangzhou for more than 3 months. With a violation of the alternating pass, if there is no violation of the alternating pass-regulated record, there is also a warning of the warning & rdquo; even if there are other traffic violations within 3 months, it is not affected.

It is worth mentioning that & ldquo; excellent driving fault 3.0 & rdquo; also incorporates the mild violation of non-motorized drivers. In addition to the red light, riding fast lane, reverse driving, driving into elevated expressway and involving buckles, non-motorized drivers have no illegal records in Hangzhou for more than 3 months, and warn education for the first time illegal Do not punish. 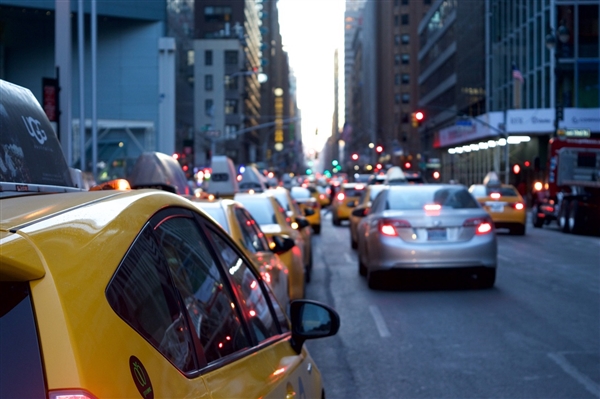 Related news
Apple AR devices are the earliest or unveiled developer conferences that need to be bundled with the iPhone.
Are you OK？ Sogou input online "Lei Jun imitation" voice
We are the best producer of authentic counterfeit Banknotes,
These situations are no longer fine! Hangzhou new measures implementation on December 1
Hot news this week
European Telecom I hope that the US science and technology giants bear the cost of network construction
5G Core Standard Essential Patent Competition: Huawei Wins again!
Sources say tesla's German plant will start production in December, while Volkswagen's Audi will start production of the Q4
WeChat "intercom" upgrade: point-to-point open external chain, group chat can access e-commerce class chain
Blue factory to create a new generation of mobile phone OS official announcement! Thoroughly remould oneself
It's not just Apple and Google! Samsung wants to reduce its dependence on Qualcomm by boosting its chips
The news said that Iqiyi lay off 20% -40%! The official responded: no deny
Australia pushes new libel laws to force Twitter and other platforms to reveal the identities of "keyboard warriors"
The latest variant of the new crown emerged in early November: new State of New York has entered a catastrophic state of emergency due to the outbreak
The first batch of invited to become Apple ecological developers, Bunkes launched a variety of Magsafe accessories
The most popular news this week
Never go back! Apple's generation of classic machines is closing
Kylin flagship Soc support! Huawei's new flagship Mate has been revealed to have a different look
120 seconds to see this year's only day full food: faint black picture spectacular!
The manufacturer of qualcomm U was questioned by big V! The executive wanted to laugh
China led: World's first international cyclotron standard released
Omicron from an AIDS patient? One expert came up with a new conclusion: Too surprising
The first AD for the Snapdragon 8 flagship phone is here! The pictures are the most beautiful
Wikipedia's first entry, "Hello,World! Will be auctioned as NFT digital art
Tesla's market value evaporates by $70 billion overnight Musk cashes out $10.9 billion a month
National Post Office: Anti-"Inside Volume"!