Yunmi reported a net loss of 29.3 million yuan in the third quarter, having been scolded for playing advertisements in the refrigerator

The financial results did not reach expectations, the main reason is that Xiaomi sales are not strong

On the evening of November 24, Yunmi Technology released its third quarter 2021 results. As of September 30, Yunmi's net revenue for the quarter ended September 30 was about RMB1,057 million, down 29% YoY, while net loss attributable to common shareholders was RMB29.3 million, compared with RMB34.9 million in the same period last year. Yunmi's shares fell 13.97 percent as of the close of trading on friday after the results were released.

As Xiaomi eco-chain enterprises, positioning Internet home appliance brands of Cloud Rice Technology failed to continue the net profit growth momentum of the previous quarter. Prior to the second quarter of 2021, Cloud Rice's net profit was RMB46.415 million, an increase of 350% YoY.

Combined with earnings data, Yunmi attributed the loss for the quarter to a sharp decline in revenue from its main home appliance portfolio and an increase in operating research and development marketing expenses. Among them, product sales are still not out of the dependence on Xiaomi's ability to carry goods. Revenue from its main business fell, mainly due to a drop in sales of its contracted Xiaomi brand Sweeping Robots, the company's financial results showed. This also reflects the fierce competition in the market for sweeping robots.

In addition to the financial results fell short of market expectations, Cloud Micro's operating results were not satisfactory. Cloudmi Technologies has always valued "the number of home users" and disclosed them in its earnings reports. This was a good early data show of the rapid rise of cloud rice, but now the growth rate of this data slowed, but also raised capital market concerns about the potential of cloud rice development.

The number of home users reached about 6.3 million in the quarter, up just 400,000 from 5.9 million reported in the previous quarter. At the same time, CloudMie's product penetration for existing home users is insufficient. According to the results, the proportion of household users with two or more Cloud Meters connected products was less than a third, or 21.1 per cent;

This means that Cloud Meters networking products, which are dominated by Internet appliances, continue to impress users with limited capacity.

An all-house intelligent industry insider told Caijing Weekly that the epidemic has brought the concept of home multi-dimensional promotion, from the past simple living place into a set of life, work, education, health as one of the integration of places, smart home life needs have been greatly promoted.

But the demand that has been generated does not seem to be presented in Cloud Meters. 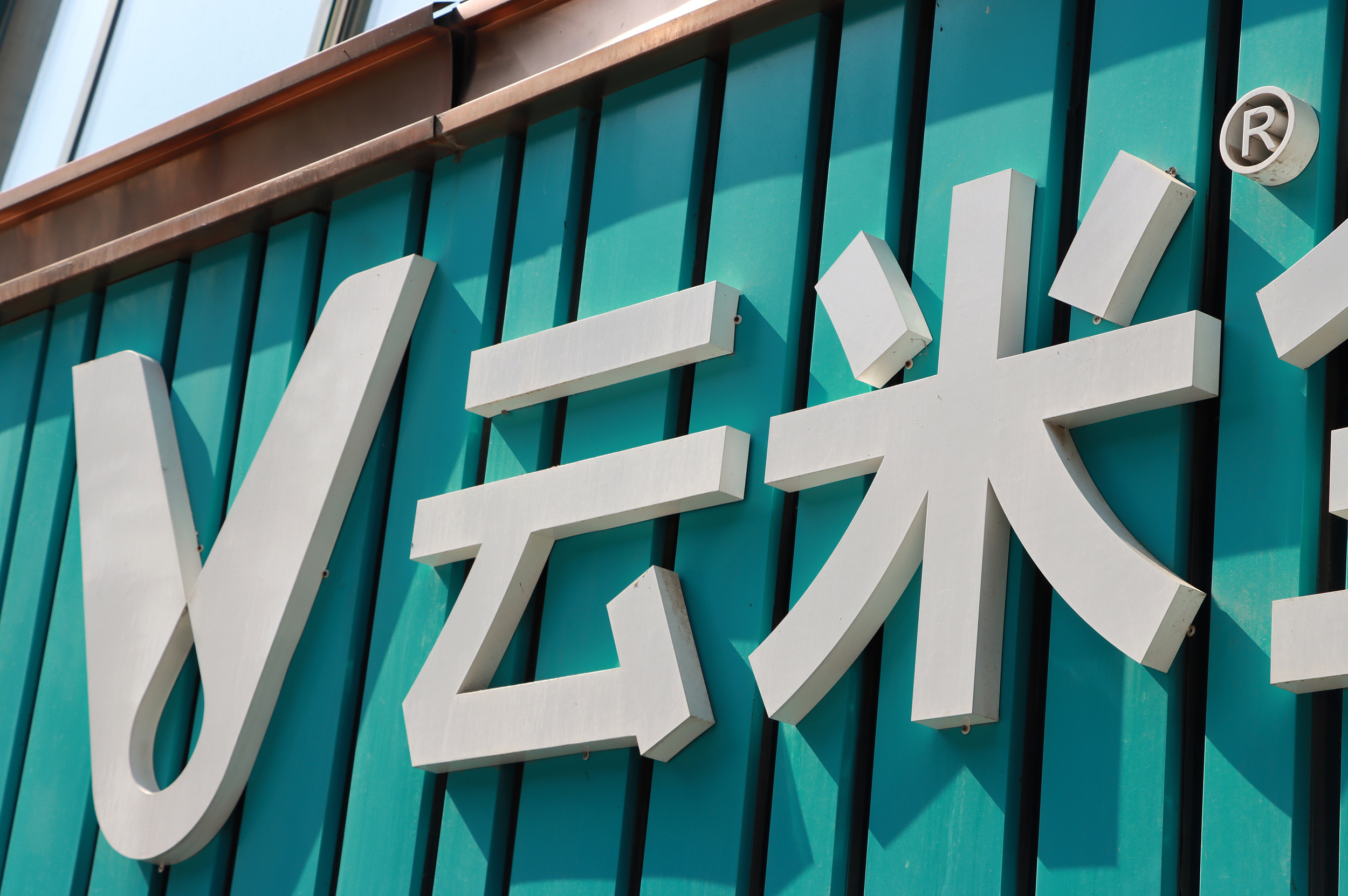 Chen Xiaoping, CEO of Yunmi Technologies, has said That Yunmi's goal is to create a technology boom to attract young consumers. But it's not easy to walk this way.

This is also reflected in the marketing costs of cloud meters. In the third quarter after signing Dunlun, Yunmi's sales and marketing expenses reached RMB183.4 million, compared with RMB152.2 million in the same period last year, an increase of more than 20% YoY.

And in late September, another thing happened that made consumers uncomfortable. There are cloud meter users on social media spitting out cloud rice with large screen refrigerator, there is forced advertising. The incident, as a negative teaching material for the consumer experience that product-oriented companies pay particular attention to, once rushed into hot search.

Yunmi later responded that the ad display page could be manually closed, but was again questioned about the importance of avoiding weight. Instead of shutting down specific ad pages, users want to turn off ads altogether.

In this event, Yunmi large-screen refrigerator, can be said to be Yunmi in order to meet the trend of the times, the introduction of "feature products." In related product ads, Yunmi used the slogan "Fridge can also brush short video".

Unsurprisingly, the move has raised more questions. Many users on the internet spit: "Who's going to swipe a short video on the fridge?" "In the eyes of these vomit users, the short video of the cloud rice refrigerator brush is a complete gimmick design, out of touch with the actual fantasy needs.

With so many product problems, the core is Cloudmee's business model. Yunmi Technology adopts the new F2C retail model, reduces the gap between middlemen, directly benefits consumers, so that its products have a price advantage.

Yunmi follows the typical Internet concept, the product has a price advantage, but low hardware profits, but also have to create revenue through Internet services. That is, the so-called "hardware does not make money, services make money" model. And the core of Internet services to make money model comes from advertising.

Side effects of this pattern have occurred in Xiaomi. Due to the early Xiaomi emphasis on the ultimate cost-effective, hardware profits are very low, resulting in Xiaomi's mobile phone user experience in word-of-mouth suffered a lot about advertising too much related to the slot. Xiaomi in recent years is trying to reverse this brand image, to the high-end trend.

As Xiaomi ecological chain deep-cultivated Internet home appliances brand, Yunmi's road to independent development has not escaped a similar circle. Yunmi large-screen refrigerator can be said to be the product born in this mode. Being a young man-approved trend card is often considered a key factor. But having a cost-effective product doesn't mean young people are willing to accept their endless advertising harassment.

Related news
Three doors of yunmi Internet refrigerator 408l for sale: equipped with 21 inch display screen
The linely group's best mobile processor of the year: God u Kirin 810 wins the title
I URGENTLY NEED MY EX BACK WITH THE HELP OF A SPELL CASTER
I NEED MY EX BACK WITH THE HELP OF A SPELL CASTER 2021
I NEED MY EX BACK WITH THE HELP OF A REAL SPELL CASTER 2021
Yunmi reported a net loss of 29.3 million yuan in the third quarter, having been scolded for playing advertisements in the refrigerator
Hot news this week
European Telecom I hope that the US science and technology giants bear the cost of network construction
5G Core Standard Essential Patent Competition: Huawei Wins again!
Sources say tesla's German plant will start production in December, while Volkswagen's Audi will start production of the Q4
WeChat "intercom" upgrade: point-to-point open external chain, group chat can access e-commerce class chain
Blue factory to create a new generation of mobile phone OS official announcement! Thoroughly remould oneself
It's not just Apple and Google! Samsung wants to reduce its dependence on Qualcomm by boosting its chips
The news said that Iqiyi lay off 20% -40%! The official responded: no deny
Australia pushes new libel laws to force Twitter and other platforms to reveal the identities of "keyboard warriors"
The latest variant of the new crown emerged in early November: new State of New York has entered a catastrophic state of emergency due to the outbreak
The first batch of invited to become Apple ecological developers, Bunkes launched a variety of Magsafe accessories
The most popular news this week
Never go back! Apple's generation of classic machines is closing
Kylin flagship Soc support! Huawei's new flagship Mate has been revealed to have a different look
120 seconds to see this year's only day full food: faint black picture spectacular!
The manufacturer of qualcomm U was questioned by big V! The executive wanted to laugh
China led: World's first international cyclotron standard released
Omicron from an AIDS patient? One expert came up with a new conclusion: Too surprising
The first AD for the Snapdragon 8 flagship phone is here! The pictures are the most beautiful
Wikipedia's first entry, "Hello,World! Will be auctioned as NFT digital art
Tesla's market value evaporates by $70 billion overnight Musk cashes out $10.9 billion a month
National Post Office: Anti-"Inside Volume"!