"Chinese version ZARA" is going to close? La Chambel is applying for bankruptcy 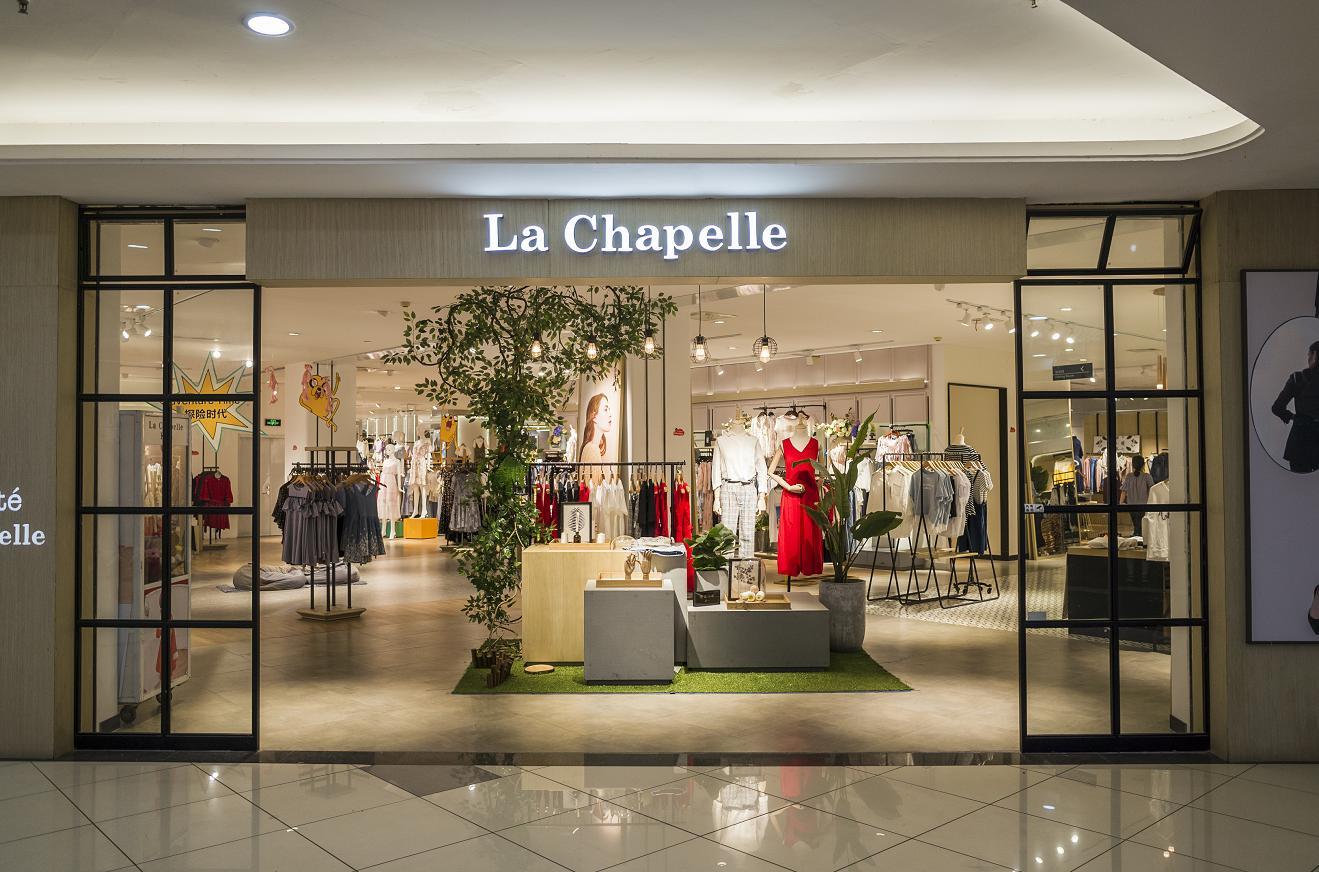 "Raise Bell is applying for bankruptcy" to board the Weibo hot search!

On November 24th, according to the information disclosed by La Chapel, a number of creditors did not pay debt in accordance with the issue of La Xia Bell, and submitted bankruptcy discipline applications.

In the insiders,As a listed company, the shell resources of La Chambel have a certain value, and bankruptcy reorganization is the best choice, not bankruptcy.

Once the housing resource is lost, the reforming significance is not large, and the time to leave to La Chamer may not have much time.

On November 22nd, * ST La Xia Bell released an announcement, the company learned from the Xinshi People's Court of Urumqi City, the company's creditor Jiaxing Chengxin Garment Co., Ltd. and other three companies have submitted "Bankruptcy Application", apply For the bankruptcy clearance, the company's A-share stock will face the risk of being terminated. 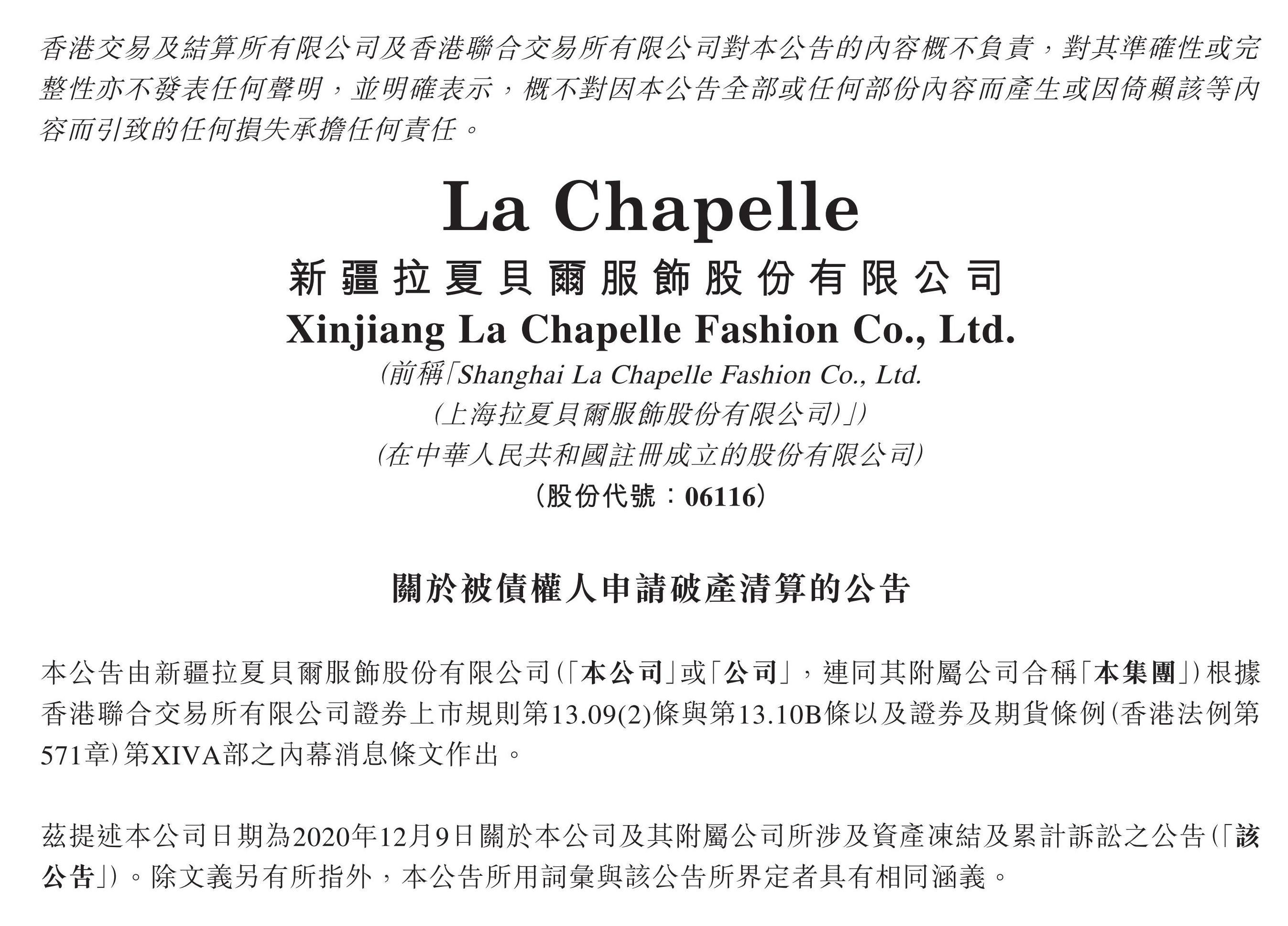 La Chapel has had "high-gloss time". In 2014, the company was listed on the Hong Kong Stock Exchange; in 2017, the company landed on the motherboard of the Secondary Exchange, became the first "A + H" share costume brand. Subsequently,This women's brand company is rapidly expanding in the country, nearly 10,000 in direct sales in the country, with more than ten brand camps, known as "China Edition ZARA".

However, the better, but due to the strategic mistake, the expansion is too fast, after landing A stock in 2017, the company's performance declined year by year. In 2018, the company had a loss in the first day, reaching 160 million yuan. In 2019, the company's loss reached 2.16 billion yuan.

In July 2020, the net profit of the audited year was negative due to the two consecutive accounting years, and the Raise Bell was implemented by the retreat risk warning; La Chapel was listed as being executed several times, and at the same time, the real-controlled people Xing Jiaxing and its Consistent actors held all A-shares shares by judicial ...

By the end of the third quarter of this year, the net assets of La Tamberg were approximately 896 million yuan.The company said that at this stage, it is still facing larger debt burden and operational pressure. The company's board will continue to seriously study countermeasures, actively plan to promote asset disposal, creditor debt restructuring, introducing external investment financing and improving internal control levels, etc., and strive to undo risk warning to maintain the company and all shareholders' interests.

In the view of the first lawyer of Beijing Tianchi Juntai Law Firm, La Chapel as a listed company, and its shell resources have a certain value, and the possibility of truly going to bankruptcy is relatively small.The reason why the creditor applies for bankruptcy may be because the controlling shareholder is not launched, causing the creditor to lose patiently forced to apply for bankruptcy liquidation, and do not rule out the creditor's use of bankruptcy clearing methods to force the La Chamer Pier holding shareholders, and even local governments seek to resolve debts. Method.

and alsoWhich clothing brands do not have?

Among them, the company has the highest loss for the company, the loss is as high as 2.128 billion yuan. The US Costume has also been serious in the first three quarters of this year, and the loss is second only to search for special and * ST La Xia. However, the loss has narrowed compared with the same period last year.

Taking the ST noble person as an example, ST nobles have just turned over this year, and in the wave of "domestic hot" in the early stage. In order to alleviate the fluidity pressure, the ST you have recently sold the asset "slimming", helping the company to achieve a large amount of funding, used to repay the debt and related debt principal and interest.

In Shenzhen, CEO Wu Yiyi said in an interview with Beijing Business Daily, the apparel industry presents the phenomenon of brand atrophy, and there may be several problems here:

First, the status quo of the incidence of consumers on the clothes of the clothes and the clothing industry based on the epidemic.

Second, many well-known brands grow and grow up from traditional media developed ages, currently selling + online TV advertising bombings on the line, they can not return.

Related news
Going through painful breakup? I suggest you read my test
Zara is declining in China, no one wants to learn it
The English name of Chinese liquor has been changed: Chinese Baijiu has been officially launched
La Chapelle, China's ZARA, filed for bankruptcy, fined 160,000 yuan for shoddy goods
"Chinese version ZARA" is going to close? La Chambel is applying for bankruptcy
Hot news this week
European Telecom I hope that the US science and technology giants bear the cost of network construction
5G Core Standard Essential Patent Competition: Huawei Wins again!
Sources say tesla's German plant will start production in December, while Volkswagen's Audi will start production of the Q4
Blue factory to create a new generation of mobile phone OS official announcement! Thoroughly remould oneself
WeChat "intercom" upgrade: point-to-point open external chain, group chat can access e-commerce class chain
It's not just Apple and Google! Samsung wants to reduce its dependence on Qualcomm by boosting its chips
The news said that Iqiyi lay off 20% -40%! The official responded: no deny
Australia pushes new libel laws to force Twitter and other platforms to reveal the identities of "keyboard warriors"
The latest variant of the new crown emerged in early November: new State of New York has entered a catastrophic state of emergency due to the outbreak
The first batch of invited to become Apple ecological developers, Bunkes launched a variety of Magsafe accessories
The most popular news this week
Never go back! Apple's generation of classic machines is closing
Kylin flagship Soc support! Huawei's new flagship Mate has been revealed to have a different look
120 seconds to see this year's only day full food: faint black picture spectacular!
The manufacturer of qualcomm U was questioned by big V! The executive wanted to laugh
China led: World's first international cyclotron standard released
Omicron from an AIDS patient? One expert came up with a new conclusion: Too surprising
The first AD for the Snapdragon 8 flagship phone is here! The pictures are the most beautiful
Wikipedia's first entry, "Hello,World! Will be auctioned as NFT digital art
Tesla's market value evaporates by $70 billion overnight Musk cashes out $10.9 billion a month
National Post Office: Anti-"Inside Volume"!