Is it the brother who 'cuts' me? The blue-moon issuer has cut jobs, with some employees saying the year-end bonus won't be awarded 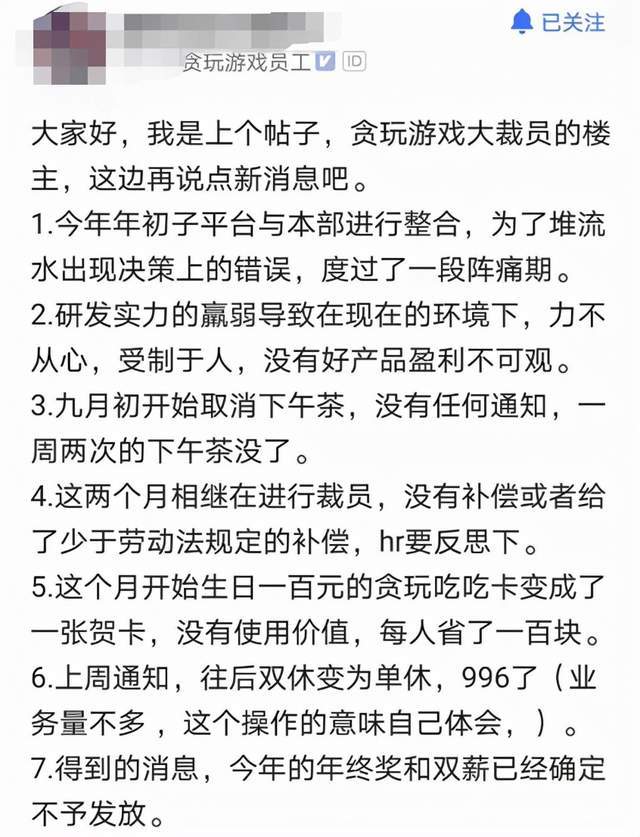 On November 25th, Red Star News quoted a blogger on the workplace social platform as saying that there had been a mass layoff at the game," the publisher of the original legend's Dragons' Den and The Blue Moon.

According to information flowing from the workplace social platform, the game "started canceling afternoon tea in September without any notice, these two months of layoffs, this year's year-end bonus and double pay has been determined not to be paid." ”

A game-playing operator confirmed the layoffs to Red Star News. The person also said that the game did have problems recently, the layoff process also made him angry, the payment of severance compensation is very low.

As for the reasons for the layoffs, the company told Red Star News that it was not clear what the layoffs were. Interestingly, the official platform for gluttony has announced the 2022 school recruitment announcement on October 20, 2021, in positions including hand-travel operations specialist, copy planning and 3D designers.

Public information shows that the main body of the game-playing company is Jiangxi Greedy Information Technology Co., Ltd., was established in 2015, the initial registration place in Shanghai Jiading District Chen Xianglu in November 2016 changed to Jiangxi Shangrao. And "it's the brothers who cut me" has become an Internet buzzword. (| AI Finance News Agency Zhao Wei)

Related news
The linely group's best mobile processor of the year: God u Kirin 810 wins the title
Developers say: after Baba is you became popular, how to play new games calmly?
HOW I GOT MY EX BACK WITH THE SPELL OF DR EROMOSE THE GREAT
DR. Murugu IS THE BEST SPELL CASTER ONLINE WHO RESTORED MY B
Hot news this week
European Telecom I hope that the US science and technology giants bear the cost of network construction
5G Core Standard Essential Patent Competition: Huawei Wins again!
Sources say tesla's German plant will start production in December, while Volkswagen's Audi will start production of the Q4
Blue factory to create a new generation of mobile phone OS official announcement! Thoroughly remould oneself
WeChat "intercom" upgrade: point-to-point open external chain, group chat can access e-commerce class chain
It's not just Apple and Google! Samsung wants to reduce its dependence on Qualcomm by boosting its chips
The news said that Iqiyi lay off 20% -40%! The official responded: no deny
Australia pushes new libel laws to force Twitter and other platforms to reveal the identities of "keyboard warriors"
The latest variant of the new crown emerged in early November: new State of New York has entered a catastrophic state of emergency due to the outbreak
The first batch of invited to become Apple ecological developers, Bunkes launched a variety of Magsafe accessories
The most popular news this week
Never go back! Apple's generation of classic machines is closing
Kylin flagship Soc support! Huawei's new flagship Mate has been revealed to have a different look
120 seconds to see this year's only day full food: faint black picture spectacular!
The manufacturer of qualcomm U was questioned by big V! The executive wanted to laugh
China led: World's first international cyclotron standard released
Omicron from an AIDS patient? One expert came up with a new conclusion: Too surprising
The first AD for the Snapdragon 8 flagship phone is here! The pictures are the most beautiful
Wikipedia's first entry, "Hello,World! Will be auctioned as NFT digital art
Tesla's market value evaporates by $70 billion overnight Musk cashes out $10.9 billion a month
National Post Office: Anti-"Inside Volume"!