Interpretation of the more than Q3 financial results: dead agriculture shrink self-employment, transformed into "more farmers"? | the planet of wealth 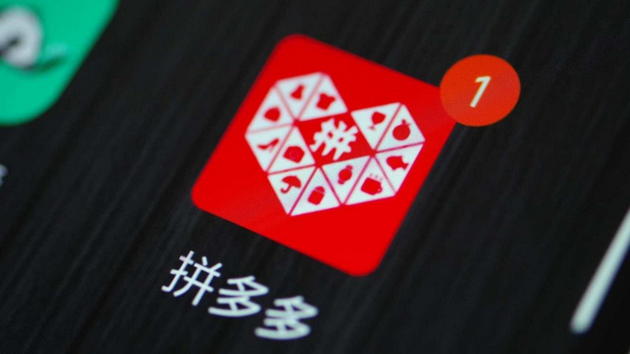 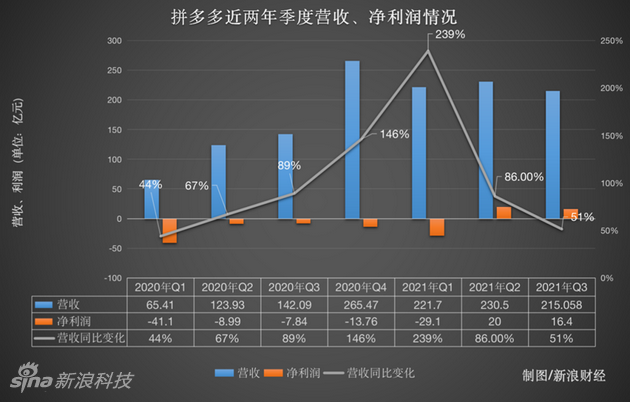 Chen Lei, chairman and CEO of Pindo, said that after the second quarter, the profits for the quarter will also be fully invested in the "10 billion agricultural research special project": "We will focus more on research and development, and take advantage of the technical advantages of more than one, to further promote the digitization of agriculture." ”

According to the China Internet Network Information Center released the "China Internet Development Statistics Report" shows that as of June 2021, China's Internet users reached 1.011 billion. After six years of rapid growth, while the total number of users is considerable, the size of the number of users has inevitably hit the ceiling of user growth. In terms of annual buyers, net increases for the quarter were about 17 million, down sharply from the previous quarter and well below market expectations of more than 20 million.

In terms of business structure, the operating income of the platform is mainly composed of three parts: platform online marketing technical services, transaction services, commodity sales, of which the platform online marketing technical services operating income of 17.946 billion yuan, up 43.7% YoY; Revenue from merchandise sales in the last quarter was RMB1,958.2 million, down sharply from the previous quarter. 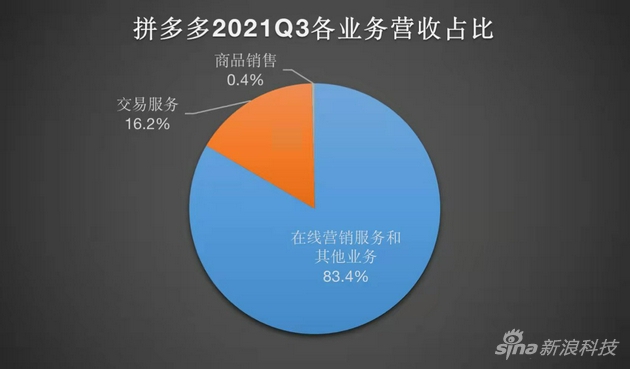 The GMV situation has not been disclosed in the quarter. However, from the financial report, merchandise sales revenue fell significantly. It may be due to weak GMV growth, the average annual consumption of users encountered bottlenecks.

Merchandise sales revenue is the new business in 2020, including revenue from proprietary business. Notably, in the first quarter of 2021, the business accounted for 23% of revenue, rising to the second largest source of revenue.

In the current quarter, the change of sales revenue of more than one commodity has attracted more attention. Ma Jing responded on the earnings conference call that when the business was first launched, it was clear that the 1P (proprietary) business was only temporarily providing consumers with products that the merchant had not sold. Therefore, 1P business is not the focus of more than one. "As platform merchants become more diverse, we don't expect the 1P business to generate higher revenue for more."

With the contraction of proprietary business, the future growth potential of The Polydo may also be seen as a three-way platform for the main industry and the operating capacity and financial performance of the multi-buying business. In recent years, agriculture has been the core of the corporate mission and strategy. Among them, buy more vegetables is part of its agricultural layout.

Can agriculture be the second growth curve?

Mr Chen said The multi-ed would shift more of the focus of the past five years to research and development. This year 618, double 11 big push, more than have taken the "low-key" route, also did not publish turnover and other data.

The company is now shifting its focus and investment to research and development to lay the foundation for stable long-term growth in the future. It is expected that its future research and development costs will increase. Chen also said the company will provide more opportunities for young talent, and in the next six months to a year, more young managers will come to power and assume important functions.

However, the impact on third-quarter finances has not yet been reflected in the results, as the "10 billion agricultural research project" was approved by the company's shareholders' meeting at the end of September.

At present, the consumer market is weak, more to maintain faster user growth there is still greater pressure. In the case of continuous investment in agriculture, short-term scale growth and profit realization are facing certain challenges, and whether agriculture can become the second growth curve, there is also greater uncertainty.

Chen Lei said in the earnings conference call, "Now the user base has been very large, how to let consumers try new categories, access to new experiences, how to meet their growing expectations, so as to enhance the trust of users, improve the psychological share of our users, this is a new challenge to fight more." ”

Related news
Cook should thank China for Apple's Q3 harvest
What about being ridiculed for "cutting leeks", Tesla Q3's performance has set a record again
Behind the growth of Tencent music's Q3 performance is the surging new wave of music
Tencent Q3 financial report: Tencent conference users exceeded 100 million, cloud business accelerated benchmarking
Special Q3 financial report: Dead agricultural shrink self-employment, the average monthly activation household reached 741.5 million
Interpretation of the more than Q3 financial results: dead agriculture shrink self-employment, transformed into "more farmers"? | the planet of wealth
Hot news this week
Zhao Lijian responded to the British "blocking" Huawei: generalizing the concept of national security harms others and harms themselves
Zhao lijian said the UK's decision to block Huawei under PRESSURE from the US was damaging others and not benefiting itself
Half a billion! Pay treasure collect five blessing to come: exceed 50 thousand people collect qi have you
Behind Microsoft's acquisition of Blizzard: Intended to build a super game carrier, SONY is the most hurt
Behind the exposed layoffs, China has praised the loss growth, and the stock price has fallen 67% in three months.
Mediatek's 40% share topped the mobile SoC market, leading for six consecutive quarters, followed by Qualcomm and Apple
The largest transaction in Microsoft's history! Hao Zhi 436.1 billion cash acquisition moving blizzard
Microsoft's $68.7 billion acquisition of Activision Blizzard became the largest acquisition in the company's history
Huawei applied for the Tianchi trademark again, and the international classification is scientific instruments and website services
Cait: it is not recommended to take quarantine measures directly for travel card users with asterisks
The most popular news this week
7 years! The classic control panel doesn't die: Windows 11 takes another step back
The most comprehensive summary! Apple will release the most equipment in history this year.
Microsoft forced upgrade Windows 10 20H2: It also uses machine learning
VR/AR global invention patent ranking TOP100: Samsung, Tencent, baidu top 3
Good start! China's software business revenue increased by 17.7% to 9,499.4 billion yuan in 2021
Microsoft Surface Pro 8 pushes the January driver update
How hard does the physics teacher work in class? Dismantle your own iPhone and induction cooker for students to see
Huawei applied for the registration of petal series trademarks
Tencent, China Merchants Port established The Port teng Internet technology company, registered capital of 50 million
Xiaomi applying for a Mibao trademark, international classification is a financial property management