Qualcomm is ramping up its investment in gaming with today's launch of The Snapdragon G3x Gen 1 gaming platform, which manufacturers can use to create handheld gaming terminals similar to nintendo's Switch or Steam Deck, The Verge reports. The Snapdragon G3x Gen 1 is an Android-based platform designed to let you play Android games, stream them from a console or PC, or play them through a cloud gaming service.The platform is based on the new G3x chip. 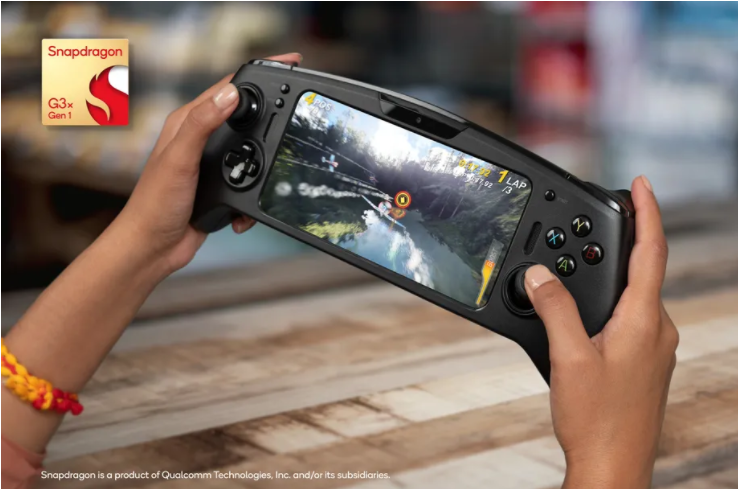 The platform is based on the new G3x chip. It has an Adreno GPU, similar to Qualcomm's existing smartphone chips, which will let you play games at up to 144fps. It also supports sub-6Hz 5G, millimeter-wave 5G and Wi-Fi 6E for fast networking. If you want to connect a G3x powered device to another screen, the chip supports output to a 4K display or connects to a MR headset via a USB-C port. The G3x also includes the company's Snapdragon Sound platform, which is designed to improve audio quality when you listen to music with supported wireless headphones.

Qualcomm has partnered with Razer to launch a development kit device, IT Home has learned. The handheld device runs on the G3x chip, has a 6.65-inch OLED screen, supports a 120Hz refresh rate, and has a 5-megapixel webcam on the front so players can live stream while playing games.

Interested developers began signing up for the developer suite through the Razer website on Wednesday. But this is not a Razer device. "This is not a Razer hardware announcement," Justin Cooney, Razer's director of global partnerships, said in a statement. The Snapdragon G3x Developer Kit is a Qualcomm device. "Through our partnership with Qualcomm, our goal is to bring more publishers and developers on board to fulfill our shared vision of creating portable gaming of the future."

It's unclear when we might see actual equipment from other Oems. "We're really focused on the developer community right now," Qualcomm's Micah Knapp said in a briefing. The equipment really depends on the Oems and when they can ship it."

Related news
Xiaomi 10 youth release the first to adopt Qualcomm Quick Charge 3 latest fast charging technology
Qualcomm announces snapdragon insiders as a community for fans
"Report on corporate responsibility in China 2020" officially released
Hot news this week
Biden signed a chip and scientific bill, a video call of WeChat iOS internal test suspension window, the advanced CPU caused Win11 to be difficult to use, Huawei new machines enter...
Alibaba: Shareholders SoftBank will settle in advance for advanced payment in advance involving a maximum of about 242 million ADR
Text message color, picture quality compression! Google calls out Apple for improving cross-device messaging
How to regulate the "broken card" operation to crack down on electrical fraud to prevent "accidental injuries" with cards?
Musk's eyes! Lei Jun released a full -size humanoid robot Xiaomi self -developed strength explosion table
Japan has confirmed that China has overtaken the US for the first time in the world's top three indicators of scientific papers
SoftBank Group announced the early settlement of up to 242 million forward contracts for ADRs in Alibaba, reducing its stake to 14.6 percent
iPad 10 will be absent from iPhone 14 conference: October appeared on Apple's last non -comprehensive tablet tablet!
The three major indexes of the US stocks opened sharply: ROBLOX fell more than 4%, Twitter and Tesla rose more than 3%
The global streaming media have increased the animation circuit is becoming a new "breakthrough" for Youaiteng
The most popular news this week
Tencent's agent of the Russian war online game announced the suspension: Customs Customs in October
Will the heat this summer cause the winter to be extremely cold? Expert science
New Intel NUC Mini! First time with Core P 12 and a castrated version
Lenovo and Motorola are involved in the case! US ITC launched 337 surveys on mobile electronic devices
Apple excludes RCS from iMessage iPhone users miss out on 5G messages
Can the Bayeng government smashing the billions of dollars to subsidize the new energy vehicle market, can the goal of "Made in North America" achieve it?
Windows 12 new picture is here: Feel it in advance
Intel NUC 12 Pro is now available
A total of 195,000 employees in Huawei: 30-50 years old is the main force
Have you ever seen a mobile phone that hides Bluetooth headset? Nokia New Machine Pre -sale: 599 yuan