Could new SEC rules prevent Chinese companies from listing in the US? The Foreign Ministry responded: firmly opposed

Question: ON Thursday, the U.S. market regulator approved a rule that allows it to delist foreign companies from Wall Street exchanges if they are unable to provide information to auditors. That could deter Chinese companies from listing in the United States. How do you respond to that?

Zhao Lijian: The relevant action of the US side is another concrete action of political repression against Chinese companies. It is also another concrete manifestation of the US side's suppression and containment of China's development. We are firmly opposed to this. China always believes that in today's highly globalized capital market, the right way to solve the problem is for relevant parties to strengthen dialogue and cooperation on issues such as strengthening cross-border regulatory cooperation and protecting the legitimate rights and interests of investors. Politicizing securities regulation to harm others will cost American investors the opportunity to invest in many of the world's fastest growing companies and will cost American professional services firms many business opportunities. The US should clearly understand the situation and provide a fair, just and non-discriminatory environment for foreign companies to invest and operate in the US instead of erecting obstacles. China will take necessary measures to safeguard its legitimate rights and interests. 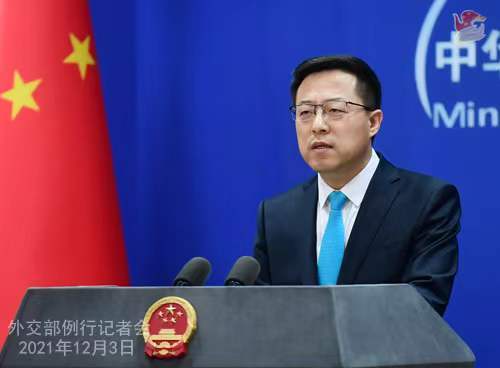 The US Securities and Exchange Commission (SEC) announced on Tuesday (local time) that it has passed an amendment to the Foreign Company Accountability Act (HFCAA), which will improve the rules for submission and disclosure of information.

The new rules are designed to ensure that foreign companies listed in the United States follow U.S. rules, according to information posted on its website. "The final rule will make it easy for investors to identify registrants whose audit firms are located in foreign jurisdictions that cannot be fully examined by the PCAOB. In addition, foreign issuers will be required to disclose the level of foreign government ownership of these entities."

'There is a fundamental agreement in our securities system -- the Sarbanes-Oxley Act of 2002 -- that if you want to list in the U.S., the companies that audit your books must be inspected by the PCAOB,' SEC Chairman Gary Gensler said in a statement. "The SEC and THE PCAOB will continue to work together to ensure that auditors of foreign companies entering the U.S. capital markets comply with our rules."

Under the new rules, the SEC will require foreign companies listed in the U.S. to disclose whether they are owned or controlled by a government entity and provide evidence of audit checks, while companies listed as variable interest entities (vies) will need to further strengthen disclosure. The law allows the SEC to ban trading or even delist a listed company's stock if the PCAOB fails to obtain the required audit papers within the specified period or if the company fails to promptly declare whether it is owned and controlled by a foreign government.

The rules specify that overseas companies that are required to comply will have 15 days to file a judicial appeal with the SEC, which can delist companies that do not comply with the rules for up to three years.

Related news
Netease Youdao submitted its IPO prospectus to SEC: revenue of 548 million yuan in the first half of the year
The English name of Chinese liquor has been changed: Chinese Baijiu has been officially launched
Could new SEC rules prevent Chinese companies from listing in the US? The Foreign Ministry responded: firmly opposed
Hot news this week
Zhao Lijian responded to the British "blocking" Huawei: generalizing the concept of national security harms others and harms themselves
Zhao lijian said the UK's decision to block Huawei under PRESSURE from the US was damaging others and not benefiting itself
Half a billion! Pay treasure collect five blessing to come: exceed 50 thousand people collect qi have you
Behind Microsoft's acquisition of Blizzard: Intended to build a super game carrier, SONY is the most hurt
Behind the exposed layoffs, China has praised the loss growth, and the stock price has fallen 67% in three months.
Mediatek's 40% share topped the mobile SoC market, leading for six consecutive quarters, followed by Qualcomm and Apple
The largest transaction in Microsoft's history! Hao Zhi 436.1 billion cash acquisition moving blizzard
Microsoft's $68.7 billion acquisition of Activision Blizzard became the largest acquisition in the company's history
Huawei applied for the Tianchi trademark again, and the international classification is scientific instruments and website services
Cait: it is not recommended to take quarantine measures directly for travel card users with asterisks
The most popular news this week
7 years! The classic control panel doesn't die: Windows 11 takes another step back
The most comprehensive summary! Apple will release the most equipment in history this year.
Microsoft forced upgrade Windows 10 20H2: It also uses machine learning
VR/AR global invention patent ranking TOP100: Samsung, Tencent, baidu top 3
Good start! China's software business revenue increased by 17.7% to 9,499.4 billion yuan in 2021
Microsoft Surface Pro 8 pushes the January driver update
How hard does the physics teacher work in class? Dismantle your own iPhone and induction cooker for students to see
Huawei applied for the registration of petal series trademarks
Tencent, China Merchants Port established The Port teng Internet technology company, registered capital of 50 million
Xiaomi applying for a Mibao trademark, international classification is a financial property management