According to the news previously exposed,Xiaomi Mi 12 and Xiaomi Mi 12 Pro will be officially released at the end of this month.

With the arrival of the new flagship, the price of the previous generation flagship Xiaomi Mi 11 Pro has reached the lowest point.

Today coincides with the double 12 promotion, Jingdong Mall shows that Xiaomi 11 Pro 8GB + 128GB version of the coupon is reduced by 300 yuan, the price is 3699 yuan, PLUS members can enjoy exclusive subsidies,The price is as low as 3489 yuan,Very competitive in the same gear.

Xiaomi Mi 11 Pro is the Android machine emperor released by Xiaomi this year,The Xiaomi Mi 11 Ultra, released at the same time, is called the "Light of Android".

In terms of imaging,The Xiaomi Mi 11 Pro is equipped with the same custom main camera Samsung GN2 as the Xiaomi Mi 11 UltraIt has a 1/1.12-inch super outsole, jointly created by Xiaomi and Samsung, with the night owl algorithm developed by Xiaomi, the night imaging performance can be called "night vision".

In addition, the Xiaomi Mi 11 Pro is also equipped with an 8-megapixel periscope telephoto lens, a 13-megapixel ultra-wide-angle lens, support for 8K video recording, and support for video LOG mode. 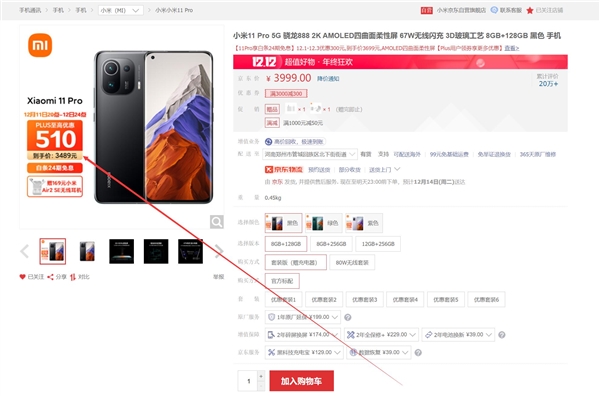