In a REPORT on 5G terminal consumption trend released by China Mobile earlier this year, it was found that hardware configuration, price and appearance occupied the top three key factors for users to buy mobile phones. In terms of hardware configuration, the top three items that users pay most attention to are processor, memory and camera, especially in the range of 3K to 6K, and processor is considered as the top priority.

The processor, or core SoC, is so important because it is critical to every aspect of the user experience, from daily running fluency to taking photos and videos to mobile gaming to navigating maps. And as a mobile phone & LDquo; Heart & throughout; The processor also determines the boundaries of hardware potential such as memory and cameras.

Qualcomm recently launched the latest generation of its flagship mobile platform, Snapdragon 8 Gen 1, which is officially summarized as connectivity, imaging, AI, gaming, audio and security. It is not difficult to find that only in terms of these six points, terminal manufacturers are most good at differentiation to attract users is the image strength. 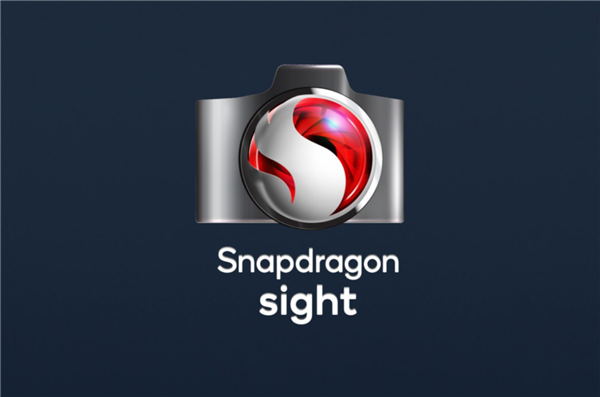 Among them, in the image processing of &LDquo Throughout the brain &; In terms of ISP unit, Snapdragon 8 has been upgraded from the first 14bit triple ISP in snapdragon 888/888 Plus era to 18bit triple ISP, which is not only the first 18-bit ISP for commercial mobile devices, but also achieves 4096 times of increase in dynamic range data volume. It can process 3.2Gigapixels (3.2 billion) per second, up to 4 more stops in dynamic mode and 5 times better in night mode. 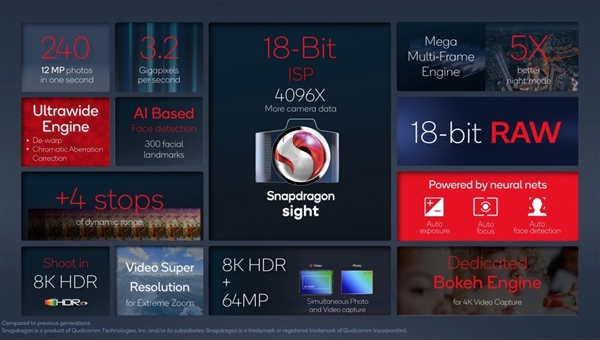 As we know, photography is a game of light and shadow, the richer the image information captured per unit of time, the final effect of the film can be guaranteed. Moreover, taking photos has evolved into the core function of mobile phones. Due to the progress of hardware and software, more and more professional gameplay has been derived. For example, RAW format is supported as SLR, which is convenient for post production. Undoubtedly, with the powerful 18bit three ISP guarantee, manufacturers can adjust the camera to have a larger space, and finally let users get quantitative change to qualitative change experience upgrade.

This is the first time that Snapdragon 8 supports 8K HDR (30FPS) video recording and over 1 billion colors OF HDR10+ format, demonstrating the powerful computing performance of the chip.

For consumers, 8K is no longer a concept. Bilibili, a domestic headvideo website, has launched 8K ultra HD video quality and supports Up to upload 8K videos. With the power of Snapdragon 8, there is no doubt that video creation in the future will make another leap in definition. 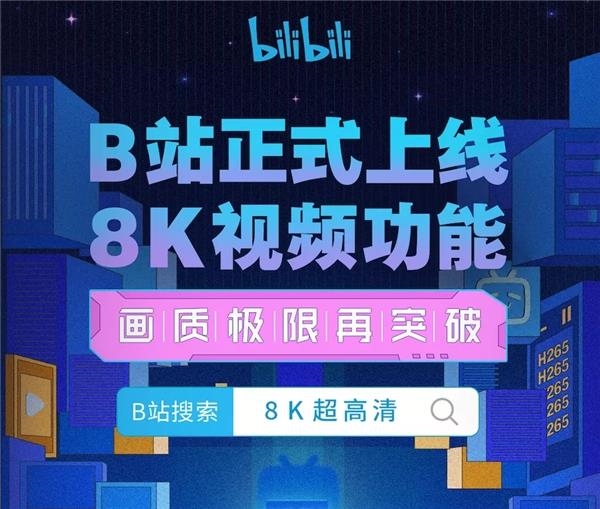 Clarity is one thing, of course, and in terms of what you see is what you get, the snapdragon 8's new blur engine works with Rainbow Soft, which adds beautifully soft backgrounds to videos and makes them even more stunning, just like having portrait mode turned on when shooting.

So-called triple concurrent shooting that supports three cameras together to take photos and video, through qualcomm algorithm optimization and strong support, users in the use of three camera taken together can obtain a smooth switch experience at the same time, to avoid the occurring in the process of zoom past video jump, white balance and a series of problems.

In order to improve the film production rate and guarantee the film production effect, snapdragon 8 Gen 1 platform can realize the multi-frame synthesis ability of hundreds of pictures in a short time, and can distinguish dynamic and static objects. For example, in the future, it is easy to get a large film with clear portrait in the foreground and gorgeous traffic flow or light track as the background when you raise your hand to take a picture.

In addition to the 18bit triISP, the snapdragon 8 platform also adds a new low-power smart-aware ISP that enables the camera to operate at very low power consumption, enabling users to experience the convenience of always on face unlock and the high privacy of keeping the lock screen locked when no face is exposed. 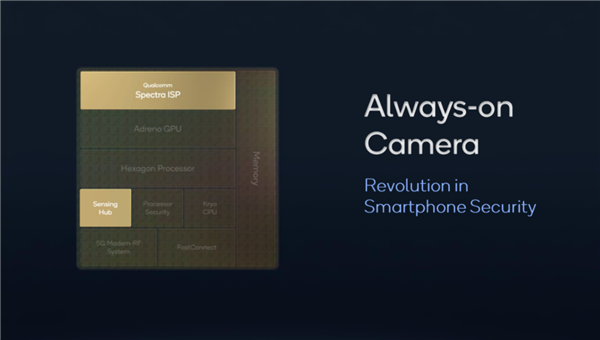 Allow mobile lens have been active but does not increase power consumption, this function can let the developers to use mobile phone camera online at any time and develop some new features, such as power to achieve more rapidly sweep yards, smart breath screen or lock screen to achieve the province electricity or privacy (such as someone over the user's shoulder to see the screen, the screen will show black screen, Hide personal content or lock the phone screen), etc.

In terms of data, the seventh generation qualcomm AI engine integrated with Snapdragon 8 has four times the performance of snapdragon 888 and 1.7 times the energy efficiency of snapdragon 888. Beyond the parameters, snapdragon 8 goes deeper into all KINDS of AI applications in advance, creating more AI functions that are actually visible. Taking mobile phone photography as an example, the above mentioned blur engine, super multi-frame synthesis and triple concurrent shooting are all supported by the powerful computing power of the new Snapdragon AI engine. 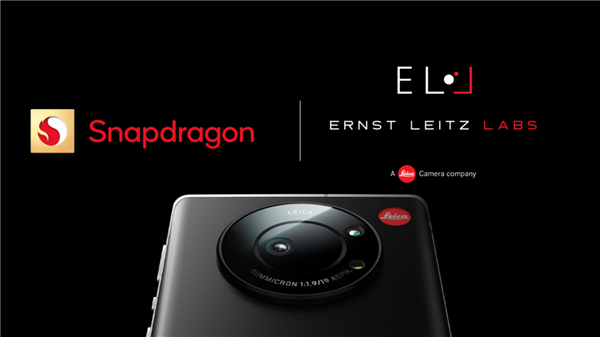 It is worth mentioning that Qualcomm also cooperated with Leica to realize leica Leitz style filter. Supported by AI engine of Snapdragon platform, you can also take leica M10 photos with The taste of Leica like Noctilux 50mm and Summilux 35mm/28mm lens.

From the above introduction, Xiao dragon 8 in image plane provides enough strong hardware and software security, however, it was only laid a solid foundation, ultimately personalized video camera function definition, style, etc., also need to examine OEM's ability to read and chip, the emphasis has been placed on the strategy of cameras and define the target users. From another point of view, the terminal manufacturers are showing off, also means the market a hundred flowers bloom.

Related news
Benchmark test results of Qualcomm snapdragon 865 reference equipment
The world's first cat. 1 bit Internet of things chip springvine v8910dm released by violet
Arm China releases the first ISP Linglong: 2 years, local self research
More than the spring tide of core making, millet oppo and vivo will also enter the ISP
First 18bit ISP: Snapdragon 8 lifts the ceiling of mobile photography to new heights
Hot news this week
Zhao Lijian responded to the British "blocking" Huawei: generalizing the concept of national security harms others and harms themselves
Zhao lijian said the UK's decision to block Huawei under PRESSURE from the US was damaging others and not benefiting itself
Tencent web drama "Beginning" Douban opening score 8.2: the male protagonist's mobile phone has become a highlight!
Samsung's new notebook patent publication: the keyboard is divided into two-quarters after two folds.
AsiaInfo Technology Announces Acquisition of iResearch Consulting to continue to increase digital operations and digital and intelligent transformation
Canon China plans to close some production lines in Zhuhai in response to the zhuhai company's suspension of production
Breakthrough: Chinese scientists have discovered and confirmed the boson exotic metal for the first time
Volkswagen's sales in China plummeted, a record low in 8 years! The CEO revealed the reason for the helplessness
Only 2 decisive headphones Class A Certification of the Ministry of Industry and Information Technology? Perhaps it is misunderstanding
1KW electric energy production 3KW heat Tesla hot pump low temperature hidden dangers were investigated
The most popular news this week
Can Jay Chou listen free? Look at 15 seconds, listen to 30 minutes song, QQ music internal test free listening song mode
Activision Blizzard employee: It's good that the company is being bought by Microsoft. Maybe it can be saved
The Hang Seng Technology Index is 0.95%: Netease has fallen over 3%, and the quick hand fell over 2%.
China's groundwater resources reserves are identified for the first time: the southern freshwater reserves account for only 5% of the country's total
Microsoft Gaming Executive: Had a friendly call with Sony management
The United States seeks to contain scientific giants Google 2021 year tour spending increased by 13 million yuan
QQ Music ranked third among the world's most popular music platforms
IPHONE open side load? The US Senate Group has approved the bill to vote
钛媒体科股早知道：价格创十年新高，需求占比或提升5倍以上，特斯拉全球出击疯狂抢占该资源；国家卫健委研究出台更多积极生育支持措施
Take stock of Microsoft's top ten acquisitions: 3 of the more than 10 billion US dollars Nokia is not in the top 5