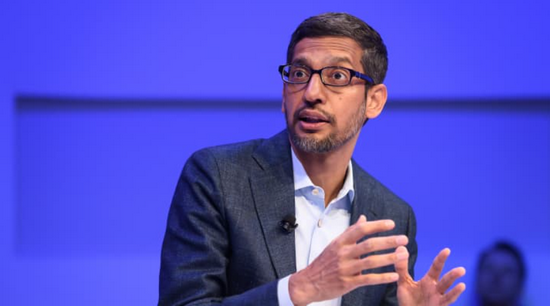 In the US tech giant Google, employees are reportedly pressing management to bring back the company's once desirable culture of integrity and fairness.

Earlier this month, Google held an online all-hands meeting. At the meeting, CEO Sundar Pichai read a popular question from employees. Google has an internal feedback system called Dory, which allows employees to submit questions about the company or "tip" on hot issues they want addressed.

Said the Iranian reads the question, now, it seems, Google executives on Dory system submitted question more and more a lawyer style, full of cliches, ignoring the problem itself, "whether we plan to fairness, sincerity, modesty, frank, back to Dory answer, or to walk on a road full of the flavor of bureaucratic?"

This question got the "top" rating from Google's 673 employees. The media also obtained the transcript of the questions and a recording of Pichai's answers.

Pichai gave a long answer to the question, first saying that he understood the employee sentiment behind the question. "I think there are a lot of reasons behind it," he said.

Over the past few years, Google's corporate culture has changed dramatically, sparking controversy both inside and outside the company. There was a time when Google revolutionized the corporate culture of Silicon Valley, fostering an open, happy office atmosphere where employees could engage in free discussion at one of the world's largest technology companies.

But the company's culture appears to have shifted amid a sexual-harassment scandal involving senior executives and Google's quiet expansion of contracts with the U.S. government and military. The atmosphere of positiveness has shifted and trust has been eroded.

Subsequently, Google management imposed a ban on internal discussion of certain topics and even fired some of the leading employees who had criticized the company and organized protests. In 2019, a Google employee told the press that the company was becoming increasingly "unrecognizable."

Speaking at the all-hands meeting, Pichai said the company has faced great challenges in communicating with employees around the world during the pandemic.

He said Google, which now has 150,000 employees worldwide, needs to communicate remotely during the coronavirus pandemic. He has found that more Google employees are using internal systems to check hot topics during the pandemic, which may also give them a sense that executives' answers are cliched and stereotyped.

Since March 2020, large numbers of Google employees have been forced to work from home. Like other companies, Google now faces the challenge of keeping in touch with its employees. And unlike other companies, Google has been more aggressive in reopening its offices. However, Google recently announced a delay in its return to the office due to a spike in infections from the Omicron Novel Coronavirus variant.

At Google's weekly all-hands meeting, Pichai and other executives answer hot questions from The Dory system. However, this mode of communication has been forced to change, the conference to network video means.

Responding to questions, Pichai said the move to a physical venue for online video conferencing had brought a new dimension to the all-hands conference.

Some executives were nervous about answering questions in the new setting, he said. "I often felt that employees would not forgive small mistakes, and executives felt that answers could be written out in advance and included outside the company, which made everyone very cautious."

Pichai said integrity, fairness and trust within Google must be a two-way street. He alluded to employees who reveal internal secrets to the outside world.

"You have to be very serious to be able to maintain integrity and trust in such a big business." He said.

Over the past two years, the company has reorganized itself around small groups, a model that actually facilitates honest communication, Pichai says. "I think it's extremely important to develop small forums."

At the end of his answer, Pichai said he appreciated the question and that it was great feedback. "I'm glad it's being asked and I want to encourage everyone to express what they think and make us better."

A Google spokesman could not immediately be reached for comment on Pichai's response.

In 1999, Google founders Larry Page and Sergey Brin created weekly all-staff meetings at the company's Mountain View, Calif., headquarters. This is actually an internal forum where employees can express internal problems that have disappointed them and communicate with management face to face. The all-staff conference became a selling point to attract outside talent to Google, and many U.S. tech start-ups followed suit.

In 2019, Pichai announced that weekly all-hands meetings would be replaced with smaller monthly meetings that would continue to discuss internal business issues.

Related news
Google's first half of the past
Eric Schmidt resigned as a technical adviser to Google's parent Alphabet in February
Meta Company slams Facebook to change the name in the open letter
Hot news this week
Zhao Lijian responded to the British "blocking" Huawei: generalizing the concept of national security harms others and harms themselves
Zhao lijian said the UK's decision to block Huawei under PRESSURE from the US was damaging others and not benefiting itself
Tencent web drama "Beginning" Douban opening score 8.2: the male protagonist's mobile phone has become a highlight!
AsiaInfo Technology Announces Acquisition of iResearch Consulting to continue to increase digital operations and digital and intelligent transformation
Samsung's new notebook patent publication: the keyboard is divided into two-quarters after two folds.
Canon China plans to close some production lines in Zhuhai in response to the zhuhai company's suspension of production
Breakthrough: Chinese scientists have discovered and confirmed the boson exotic metal for the first time
Volkswagen's sales in China plummeted, a record low in 8 years! The CEO revealed the reason for the helplessness
The country's first artificial brush interference search engine calculation bill sentenced Baidu to pay 2 million yuan
The small screen mobile phone that is confident than the iPhone 13Mini is marginally released for two month declarations.
The most popular news this week
145 yuan of apple polished cloth grown? Official teach you how to clean
IDC: Nearly 20% of IoT systems are expected to support AI by 2024
Insurance premium inventory of listed insurance companies: auto insurance business is "turning point", life insurance to achieve positive growth
Comac vice President: The first homegrown large aircraft, the C919, is expected to be delivered this year
131,000 needles, another sky-high drug into China
Thousands of people resign NetEase game planning follow-up Harry Potter mobile game official apology
Behind Microsoft's nearly $70 billion acquisition of Activision Blizzard: $130 billion cash pile
Once the four little dragons of Guangdong, Hong Kong and Macao, and made a fortune from sports, how does Aoyuan cope with the 4.4 billion short-term foreign debt?
NetEase's "Harry Potter: Magical Awakening" topped the hot search list: "liver and krypton" caused player dissatisfaction
K50 e-sports edition opponent is coming! A new Chinese phone released in February: it claims to be the best gaming phone