The PCIe 4.0 high-speed era has finally arrived! The flagship solid-state SSD is coming

When the PS5 was exposed, more than the performance change, it was more concerned by enthusiasts that it had a significant improvement in storage performance, and even could read at the speed of seconds of large AAA games.

That's because the PS5's SSD uses the new PCIe 4.0 transfer channel, which takes read and write speeds to a whole new level.

However, PC players should not be too envious, because now the PC field has gradually begun to popularize PCIe  4.0 channel hard disks, of which Samsung 980  Pro has become a new generation of flagship SSDs with outstanding performance.

In terms of design, the Samsung 980 Pro uses a standard 2280 form factor and M.2 interface, which can be compatible with the vast majority of desktop and notebook boards.

It should be noted, though, that the Samsung 980  Pro, while capable of running on many older motherboards, doesTo play its full strength, you also need your motherboard and CPU to support PCIe 4.0 channels at the same time.Therefore, everyone must see clearly before starting.

The reason why Samsung's SSD can become the industry benchmark is that in addition to excellent performance, the unique thermal design is also the main reason. At present, the mainstream PCIe3.0 can achieve a peak speed of 8Gbps under a single channel, which is about 1GB/S speed after conversion, so the ordinary PCIe 3.0 SSD speed can not break through 4GB/S.Such speeds have become a bottleneck for increasingly large AAA games. 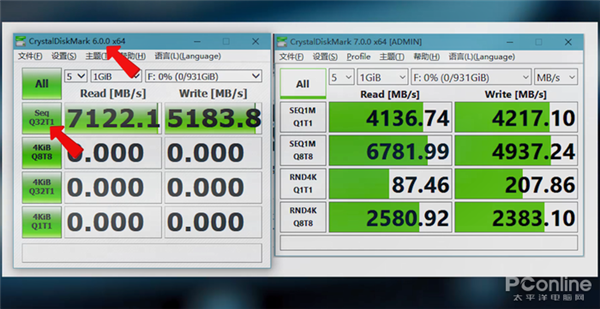 PCIe 4.0, the new generation of bus standards, is twice as fast as PCIe 3.0 in terms of theoretical speed.

So compared to PCIe3.0 SSDs, the read speed is generally 2.0 to 3.5GB/S.The sequential read speed of the Samsung 980  Pro has also directly doubled to 7GB/S, and the write speed is also as high as 5.1GB/S, which is particularly advantageous in large games.

Especially in large open-world maps, it is possible to reduce the possible stuttering due to loading map data.

Many brands will separate monitoring software and firmware upgrade software, which is very difficult for ordinary users to get started. 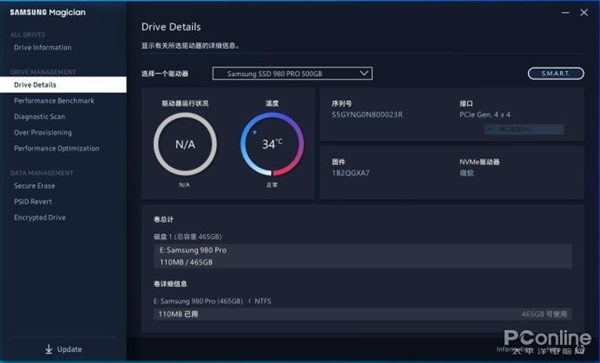 Samsung 980 Pro provides Samsung magician management software to use, in this software we can intuitively view the various data and running status of the hard disk, but also can directly use it for firmware updates, even if you are a computer white can also quickly grasp.

In my opinion, the Samsung 980 Pro is a very special SSD, because there is hardly a product on the market that can fully benchmark it in all aspects of the parameters.

Although a very small number of individual models can be comparable to Samsung 980 Pro in terms of read and write speed, they are almost all implemented with PCIe slots, which are far inferior to Samsung 980 Pro in terms of compatibility, and will also occupy additional chassis space, affecting the heat dissipation of hardware such as graphics cards, which is not worth the loss.

So on the whole, if you want to assemble a top-level PC platform, the better choice is still the Samsung 980 Pro.