The apology video didn't have long, a large number of netizens broke the high-clean sanitary napkin, in this, the high-clean silk release statement said that the suspected eggs of the consumers have tried new discussions due to consumers, and the company attached great importance to the company. At present, we have gained contact with consumers. After obtaining the product, we will actively pass third-party professional institutions, and we recognize the true cause of the problem, and will publish the test results in the first time.

Gao Jie also said that the production environment of Gao Jie's products is strictly in accordance with national health standards, adhering to strict quality control management, full enclosure production and has a high temperature process link, and the production workshop has a sanitary and anti-insectica design. The inner bug and insect egg cannot survive.

The above apologies and instructions did not receive some netizens' recognition. These users said that this is a regular means of official delay, and then many users began to post the call to resist high-clean wire products.

It is understood that Gao Jie is a female hygiene product brand under Jinji Group, born in the United States, and entered China in 1994. At present, Gao Jie has sold more than 100 countries and regions around the world. 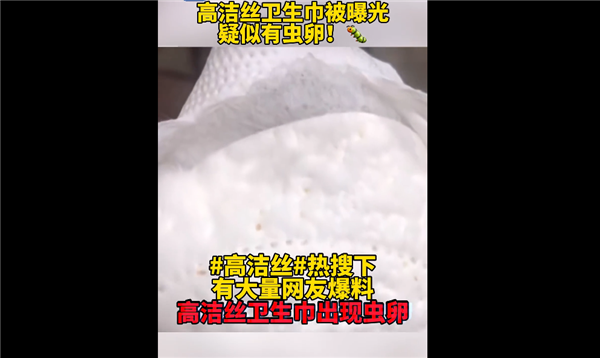