Beijing time on December 30th news, for China's Internet tycoon, 2021 is & ldquo; a year of record & rdquo; but this record is not what they want to see.

The billionaire index shows that in 2021, China's richest Ten Technology Tycoon's total net assets have evaporated 80 billion US dollars (about 509.5 billion yuan), almost falling up with a quarter of the total wealth. The Wanfoxa Index began to track the maximum annual decline since the global Rich.

Fortune, the founder Huang Wei's wealth is up to $ 42.9 billion (about 27.3 billion yuan) this year, which is equivalent to two-thirds of personal wealth, because its e-commerce platform spent a lot of stock prices 70%. 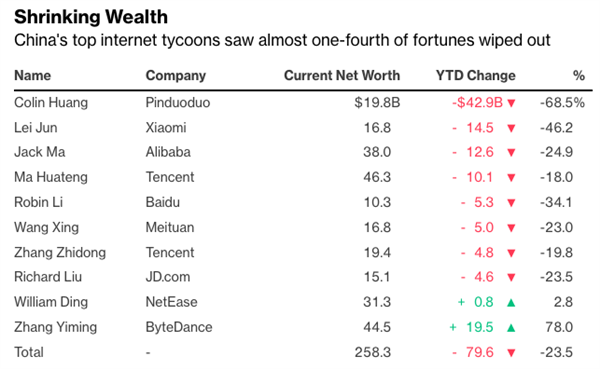 The founder of the dripping, the founder, may be the best in China's science and technology rich wealth in this year's big big. In June this year, in the first few weeks of the drip in the United States, investors snapped up the drops in the second-level market trading, pushing the valuation of the drip to $ 95 billion, while holding the dripping shares of Chengwei. The value is increased to $ 6.7 billion.

However, the good view is not long. Since the drip is regulated and planned from the United States to retain the market, the stock price has fallen by more than 60%, and the wealth of Cheng Wei has also dropped to $ 1.7 billion (about 10.8 billion yuan).

Byte jumping founder Zhang Yiming is a small Chinese Internet tycoon that achieves wealth growth this year.According to the valuation provided by Soft Silver Group in a document this year, his wealth has increased by $ 19.5 billion (about 124.2 billion yuan), which is somewhat because he let the byte beat the state of private holding company, no Affected by the turmoil of the stock market.

In May this year, Zhang Yiming announced the resignation of the byte to the CEO, and withdraws from the board of directors from last month. 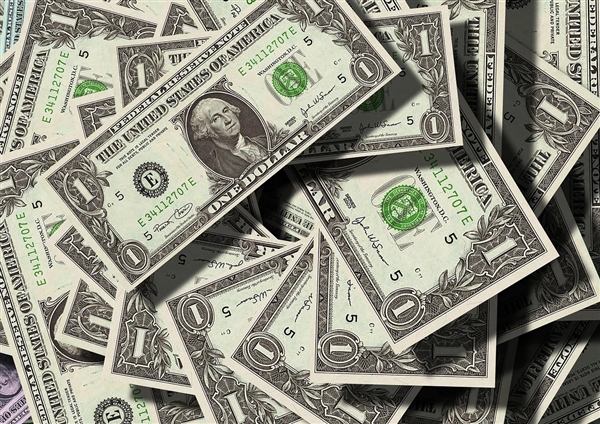 Related news
Chinese scientists protest against the scientific research environment in the United States. "Poisonous," Nature and Science speak out!
AI has captured many people and has re-entered Science, training costs $150, and wins 1,000 knives per hour.
The latest research of 3D printing has been published in science, and the printing speed and volume have been improved by an order of magnitude.
1MORE called apple sony! A real wireless headset is AirPods.
Why does "one more thing" Apple make its own chips?
Google quantum computing breaks through science cover! The first quantum simulation of chemical reactions was carried out
Hot news this week
Zhao Lijian responded to the British "blocking" Huawei: generalizing the concept of national security harms others and harms themselves
Zhao lijian said the UK's decision to block Huawei under PRESSURE from the US was damaging others and not benefiting itself
Tencent web drama "Beginning" Douban opening score 8.2: the male protagonist's mobile phone has become a highlight!
AsiaInfo Technology Announces Acquisition of iResearch Consulting to continue to increase digital operations and digital and intelligent transformation
Samsung's new notebook patent publication: the keyboard is divided into two-quarters after two folds.
Canon China plans to close some production lines in Zhuhai in response to the zhuhai company's suspension of production
Breakthrough: Chinese scientists have discovered and confirmed the boson exotic metal for the first time
Volkswagen's sales in China plummeted, a record low in 8 years! The CEO revealed the reason for the helplessness
The country's first artificial brush interference search engine calculation bill sentenced Baidu to pay 2 million yuan
Only 2 decisive headphones Class A Certification of the Ministry of Industry and Information Technology? Perhaps it is misunderstanding
The most popular news this week
Some people have a health code to turn yellow, clearly: receiving this courier to make a nucleic acid immediately
Baidu Maps pushes immersive navigation: Chongqing 3D navigation is coming
Tesla insisted not advertising
145 yuan of apple polished cloth grown? Official teach you how to clean
IDC: Nearly 20% of IoT systems are expected to support AI by 2024
Insurance premium inventory of listed insurance companies: auto insurance business is "turning point", life insurance to achieve positive growth
Comac vice President: The first homegrown large aircraft, the C919, is expected to be delivered this year
131,000 needles, another sky-high drug into China
Thousands of people resign NetEase game planning follow-up Harry Potter mobile game official apology
Behind Microsoft's nearly $70 billion acquisition of Activision Blizzard: $130 billion cash pile