Tesla has delivered a better performance than expected in a year when the global auto industry has lost its core.

In the fourth quarter of 2021, Tesla produced more than 305,000 vehicles and delivered 308,000 vehicles, breaking quarterly delivery records for six consecutive quarters, according to the company's fourth-quarter and full-year delivery data.

Tesla says deliveries are a little more conservative because it only counts vehicles in delivery statistics after they have actually been delivered to the customer and all relevant documentation has been completed. Final delivery figures could vary by 0.5% or more.

Meanwhile, Tesla said deliveries are only a measure of the company's financial performance and should not be used as an indicator of quarterly financial results, which depend on a variety of factors, including cost of sales, foreign exchange flows and the percentage of directly leased vehicles.

Tesla is on track to deliver 1.3 million vehicles in 2022, despite supply chain issues, according to analysts cited by Reuters.

Musk has said Tesla relied on in-house software engineering expertise to keep its production lines running last year, quickly rewriting the software needed to integrate alternative chips into its vehicles, the Journal said. Tesla, which is more vertically integrated than many other carmakers, also benefits from supply chain visibility and supplier relationships. 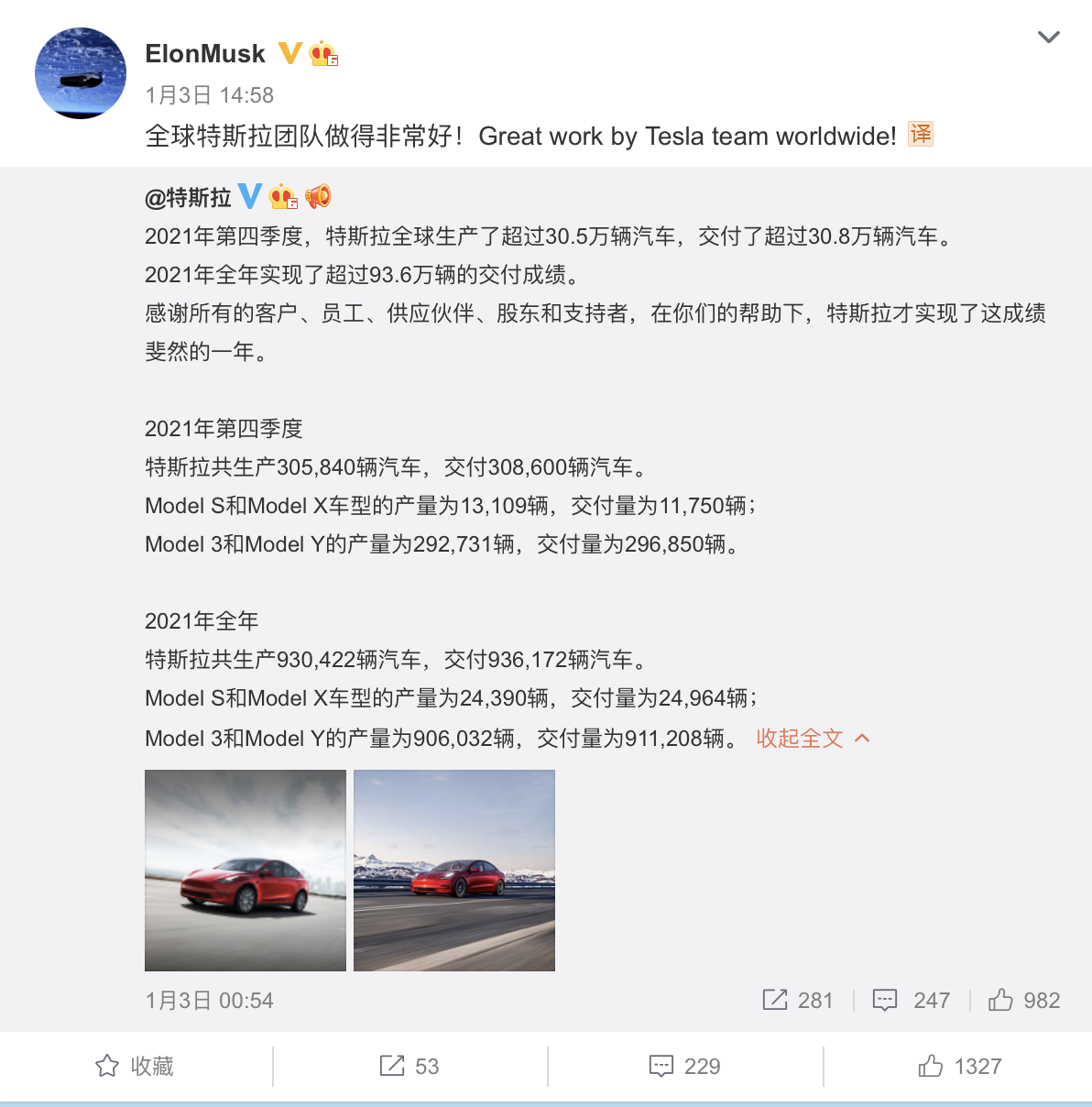 As Tesla's stock rose, So did Musk's. According to Forbes, Musk's personal wealth is estimated at $304.2 billion, putting him back above the $300 billion threshold. He is ahead of Bernard Middot, CEO of LVMH, at $103.6 billion. Mr Arnault.

Tesla will report its fourth-quarter earnings later this month, according to foreign media reports. At that point, if the company hits certain operating and valuation targets, Musk will receive millions more stock options that could add billions more to his fortune.

Tesla emerged as a big winner in the chip crisis in part because of its in-house software engineering expertise, which allowed it to adapt to the global semiconductor shortage better than many of its rivals, the Journal said. Chips are used in everything from motor control to mobile phone charging.

(This article is from thepaper.cn. For more original news, please download thepaper.cn APP.)

Related news
13 years of history NVIDIA gave up Tesla brand in a low-key way: name collision with electric vehicles
NVIDIA gives up Tesla brand in a low-key way: because of its name collision with famous electric vehicles
NVIDIA classic computing card series Tesla to be renamed: too confusing with Tesla
Hot news this week
ByteDance invested in Sequencing Technology, which is an AI industrial SaaS software service provider
It's hard to escape the monopoly sanctions American court dismissed Facebook against FTC counterattack
Former search president of Baidu xiang Hailong joins Transsion The company that sells mobile phones wants to do more Internet
2021 Global Patent List Released: Huawei ranked fourth in the top five in the world in the United States
Jiangxi Bank welcomes the new sector, the former is dismissed, and the profit has decline since the listing since the market.
The Shanghai Astronomical Observatory found a case of a galaxy "escaping" 12.1 billion light-years away
Rewrite history! The largest acquisition in the game industry was finalized: 80.9 billion yuan exceeded Tencent's record
Ma huateng: Tencent is just an ordinary company that can be replaced at any time
Enterprise WeChat active users reached 180 million The new version is connected with the video number
Lanzhou Bank was abandoned to buy 12.85 million yuan, and the first issuance was "broken", still 4 times more expensive than its peers
The most popular news this week
Build a car in an average of 34 seconds! The annual production capacity of Tesla's Shanghai factory may exceed 1 million units
Due to the false statement of leshi securities, shanxi securities subsidiary was sued for 4.571 billion yuan
Realme China President Xu Qi: Dynasty "The most popular science and technology" ""
Tesla is still a "fragrant feast" The four Indian states invited him to set up a factory in the local area
Reduce dependence on China? Tesla gets key battery materials from Mozambique
Lei Jun suggests that Xiaomi 12 series is about white
Netizens opened the Xiaomi router 4 four years ago: I found "ARE YOU OK!!!"
A hardware conference, why talk about software but more time?
The chip is comparable to the Mac, the computing power exceeds the iPhone, and the Apple AR/VR headset is really so strong?
Can working in the metasverse be more productive? Lenovo's Huang jianheng: There are also complex technical challenges