On January 4, the reporter learned that the digital RMB App (pilot version) has been publicly launched on Huawei App Market and Apple App Store.

According to the introduction, the Digital RMB (pilot version) App is the official service platform of China's legal digital currency -- digital RMB for individual users. It provides the opening and management of digital RMB personal wallet, and the exchange and circulation of digital RMB. The digital yuan App is still in the normal testing phase of the development process, and whitelisted users in the pilot regions and scenarios expanded by operators can register for the digital yuan App. 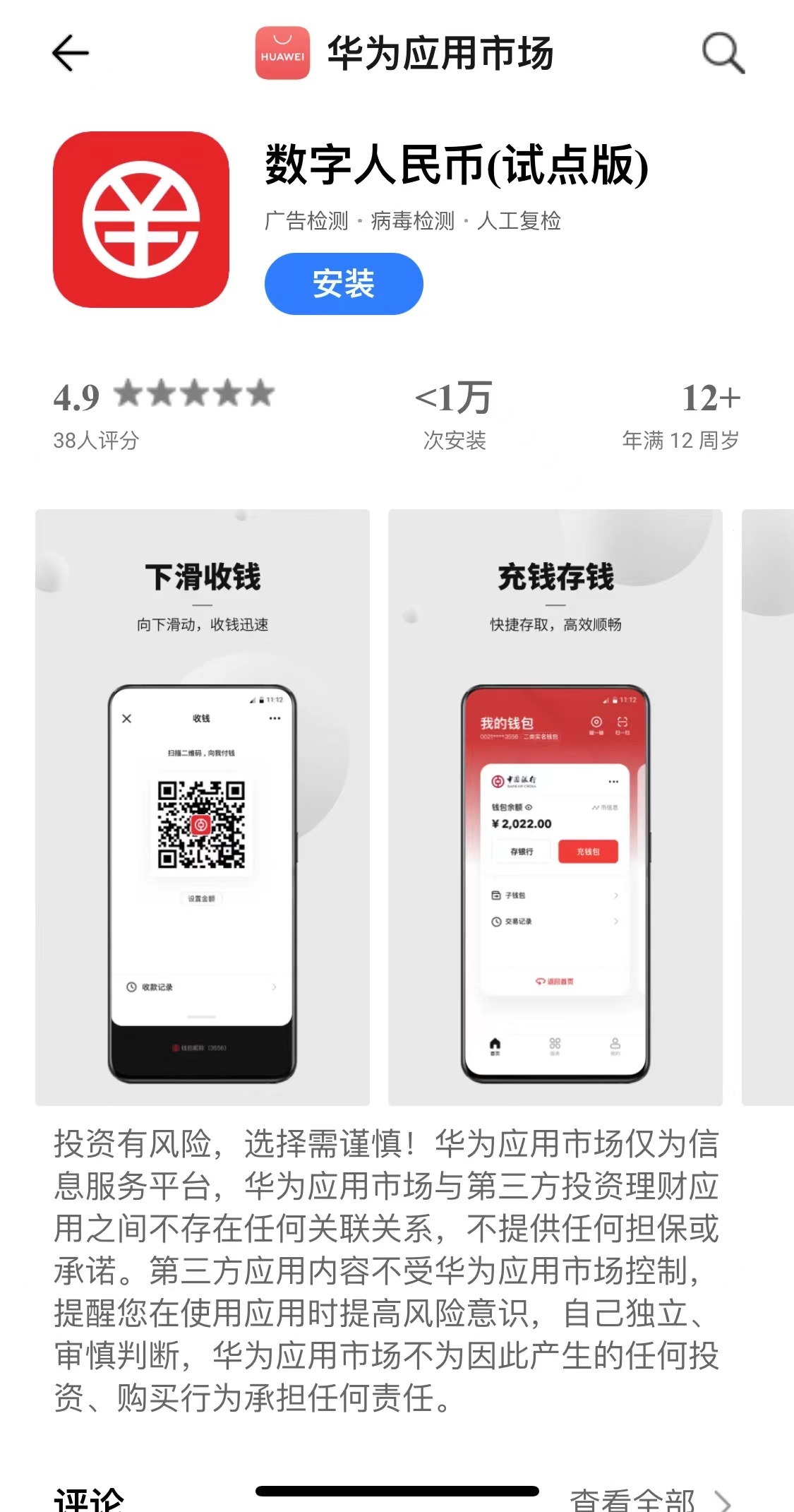 Compared with the previous procedure of installing the APP only after the code exchange, application and approval are passed, the pilot version is simple to operate and greatly improves the user experience. After hearing the news, many people in the pilot areas immediately downloaded the App and posted screenshots of the successful opening to see what functions the DIGITAL RMB App has. "The digital yuan has been put on the app store, but it's a pity that it can't be used in my region. I'm looking forward to the day when it can be used in the whole country."

Compared with the previous version, the pilot version has been upgraded in terms of functionality and partitions. For example, in terms of interface, it is divided into three major sections: home page, service and ME. In the service plate, including sub-wallet, red envelope, post a post and other functions.

Since 2021, the public acceptance of digital RMB has been constantly improving, and has made remarkable achievements in the pilot scope, participating institutions, application scenarios, and opening of individual wallets.

At present, the digital RMB is still in the regular testing stage of the research and development process. The pilot cities have been expanded from Shenzhen, Suzhou, Chengdu and Xiongan New Area to form a "10+1" pattern. The current pilot areas include Shenzhen, Suzhou, Xiongan, Chengdu, Shanghai, Hainan, Changsha, Xi 'an, Qingdao, Dalian and the Winter Olympics scene. Operating institutions participating in the pilot have also been extended to e-commerce Bank, Webank and China Merchants Bank on the basis of the six major banks.

"The open download of the digital yuan has promoted the popularity of the digital yuan and improved the convenience of using the digital yuan." Pan Helin, a member of the Information and Communication Economy Expert Committee of the Ministry of Industry and Information Technology and executive dean of the Digital Economy Research Institute of Zhongnan University of Economics and Law, told China Business News.

In The opinion of Pan Helin, the main difficulty in the future popularization of digital RMB lies in its popularity, while the key to improve its popularity lies in the following: first, communication channels. Currently, smartphone App is the best communication channel. It is more convenient for users to obtain digital RMB by binding all application scenarios through one App. Second, ease of use. The simpler payment App is, the more popular it is in the society, which is also the advantage of mobile payment over traditional payment methods such as credit cards. Digital RMB App combines these two aspects, thus providing help for the popularization of digital RMB application in the future. "Of course, at the present stage, there are still many restrictions, such as designated pilot areas and white lists, but the listing has brought a lot of expectations to people across the country."

According to the latest official data, as of October 22, 140 million digital RMB personal wallets and 10 million enterprise wallets had been opened, with a total of 150 million transactions and a turnover of nearly 62 billion yuan. Digital YUAN wallets are supported by 1.55 million merchants, covering utilities, catering services, transportation, shopping and government affairs.

Related news
The company announced immediately that it would close Android APP.
Android 10 exposed bug: app not responding
Microsoft and Facebook blame apple for app store policy
The third anniversary of the death of Windows Phone
Didi Enterprise Edition and other 25 apps have been removed: didi travel app has been removed from the official website before
The trial version of the digital RMB App can be downloaded from apple and Android App stores
Digital RMB APP take-out, taxi! What's the difference with Wechat Alipay?
Hot news this week
Zhao Lijian responded to the British "blocking" Huawei: generalizing the concept of national security harms others and harms themselves
Zhao lijian said the UK's decision to block Huawei under PRESSURE from the US was damaging others and not benefiting itself
Tencent web drama "Beginning" Douban opening score 8.2: the male protagonist's mobile phone has become a highlight!
AsiaInfo Technology Announces Acquisition of iResearch Consulting to continue to increase digital operations and digital and intelligent transformation
Samsung's new notebook patent publication: the keyboard is divided into two-quarters after two folds.
Canon China plans to close some production lines in Zhuhai in response to the zhuhai company's suspension of production
Breakthrough: Chinese scientists have discovered and confirmed the boson exotic metal for the first time
Volkswagen's sales in China plummeted, a record low in 8 years! The CEO revealed the reason for the helplessness
The country's first artificial brush interference search engine calculation bill sentenced Baidu to pay 2 million yuan
The small screen mobile phone that is confident than the iPhone 13Mini is marginally released for two month declarations.
The most popular news this week
145 yuan of apple polished cloth grown? Official teach you how to clean
IDC: Nearly 20% of IoT systems are expected to support AI by 2024
Insurance premium inventory of listed insurance companies: auto insurance business is "turning point", life insurance to achieve positive growth
Comac vice President: The first homegrown large aircraft, the C919, is expected to be delivered this year
131,000 needles, another sky-high drug into China
Thousands of people resign NetEase game planning follow-up Harry Potter mobile game official apology
Behind Microsoft's nearly $70 billion acquisition of Activision Blizzard: $130 billion cash pile
Once the four little dragons of Guangdong, Hong Kong and Macao, and made a fortune from sports, how does Aoyuan cope with the 4.4 billion short-term foreign debt?
NetEase's "Harry Potter: Magical Awakening" topped the hot search list: "liver and krypton" caused player dissatisfaction
K50 e-sports edition opponent is coming! A new Chinese phone released in February: it claims to be the best gaming phone