"I really hope to make contact with aliens one day. I hope that day will come soon." Wu Xiangping, academician of the Chinese Academy of Sciences, said in a live broadcast of his 2022 New Year's Eve speech that he believes aliens exist because Australian scientists picked up a signal on The star Proxima Centauri two months ago, which has been ruled out by human interference.

"It is also possible that there are signals from alien civilizations in the signals received by FAST (China Large Radio Telescope), but we haven't had time to identify them yet." Peng Bo, director of the Key Laboratory of FAST at the Chinese Academy of Sciences and a researcher at the National Astronomical Observatories, said.

To search for signals from alien civilizations, radio telescopes are very important tools. They can take pictures of the universe billions or even billions of years ago, help humans understand the origin of the universe, detect gravitational waves and so on. After the arecibo radio Telescope completely collapsed in December 2020, the China Sky Eye FAST, located in Pingtang County, Qiannan, Guizhou Province, has become the world's largest single-antenna radio telescope.

Recently, Peng Bo, who witnessed the project for more than 20 years, published a book titled "Project Celestia: The Dream Of The Large Radio Telescope FAST", which records the birth of "China Celestia". 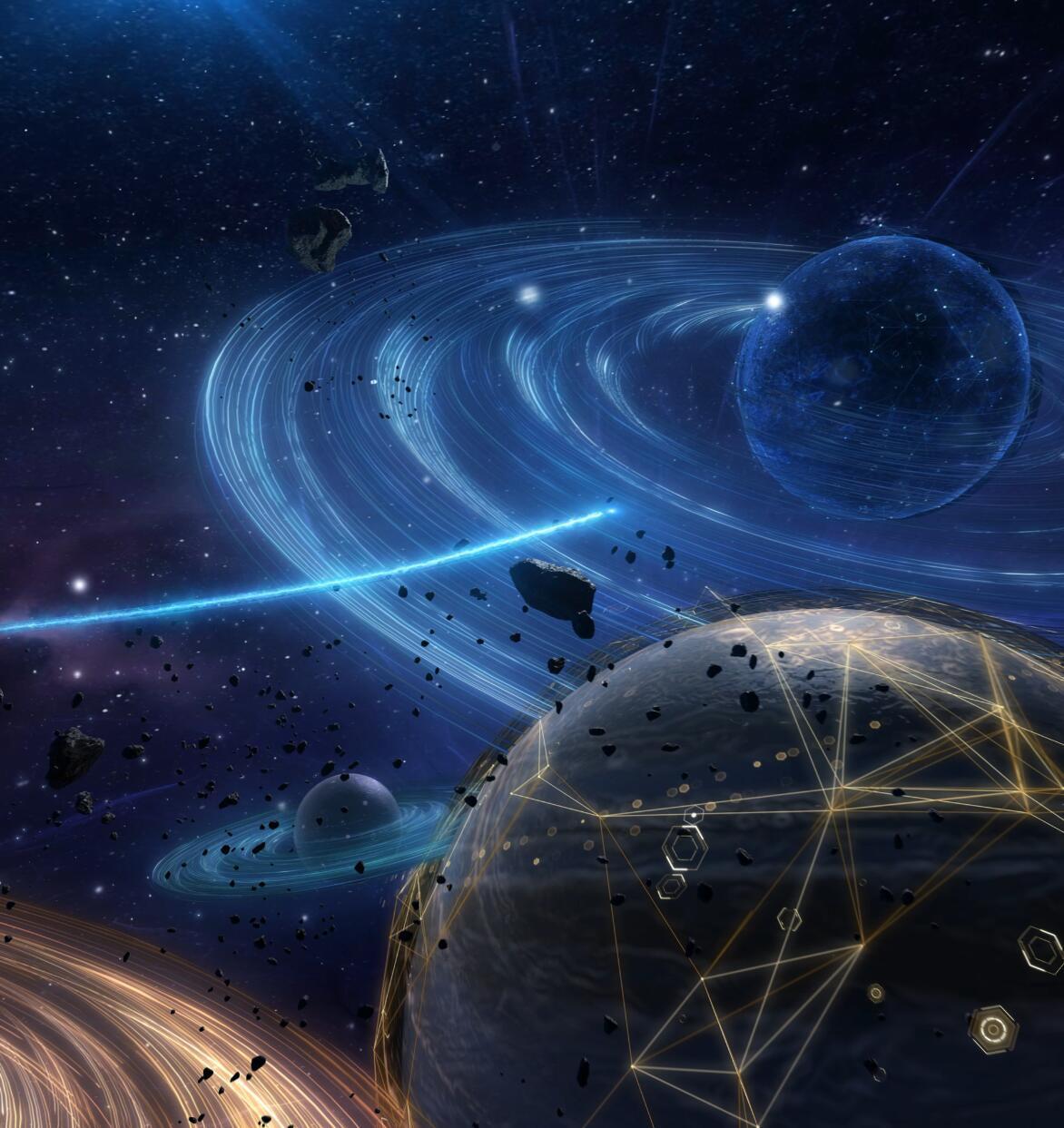 The Cauldron is the size of 30 football fields

For thousands of years, humans have mainly observed the universe through the visible light band. In fact, the radiation from cosmic objects covers the entire electromagnetic spectrum. Among them, the discovery of radio waves, which are only 90 years old, is an important way for mankind to "hear" the universe. In 1932, Carl & Middot of Bell LABS; Jansky's accidental discovery of radio radiation from the center of the Milky Way galaxy marked the birth of radio astronomy.

Pombo said the advantages of radio telescopes were evident by looking at two images of the M81 galaxy cluster, located 12 million light-years away in the direction of the Constellation Ursa Major. In optical telescope images, these clusters are three isolated galaxies, while radio telescope images show a relationship between the three, "that is, radio observations can 'see' weak connections between optical invisible galaxies, providing a 'holographic picture' of objects in the universe."

In 1993, at the International Conference of Radio Scientists held in Kyoto, Japan, the participating astronomers, including China, jointly proposed to have a glimpse of the universe before the earth's radio environment was completely destroyed, so they decided to build a new generation of Large Telescope array (LT). Until then, the world's largest single-aperture telescope was the arecibo Radio Telescope in the United States. It was built in 1965 with a diameter of 305 meters and later expanded to 350 meters. It has appeared in films such as James Bond film Goldeneye and is one of mankind's "top 10 projects of the 20th century", even ahead of the Apollo moon missions.

In 1994, under the leadership of scientists Nan Rendong and Peng Bo, the plan to build a Chinese radio telescope was also put on the agenda. After repeated outdoor investigations, the scientists found that guizhou karst depression was suitable for the construction of the spherical reflectivity telescope array, and finally settled on pingtang County, Buyi and Miao Autonomous Prefecture of Qiannan. When FAST finally opened in September 2016, it covered an area the size of 30 football fields. "Assuming it was a big pot that could hold wine, every person on earth could get four bottles of Kweichow Moutai," he said.

"When I first got involved in the project, I estimated that it would take 10 years or more, because big scientific projects such as the Hubble Telescope and the moon landing are long-term projects, and the opportunity to be the world's top dog is worth it even if it is worth it for a lifetime." Peng Bo said.

509 pulsars have been found

As of December 20, 2021, FAST has discovered 509 pulsars, more than four times as many as all other telescopes in the world combined.

A pulsar is a type of rapidly rotating neutron star formed from the explosion of a giant star. While the Earth takes 24 hours to rotate once, pulsars can rotate tens of thousands of times per second. Pulsar is one of the "four great discoveries" in astronomy in the 1960s, and its research is also the forefront of astronomy. Heish won the Nobel Prize in physics for his discovery of pulsars.

Pulsars' magnetic fields are 10 trillion times more powerful than Earth's, which would be impossible to create in a natural laboratory, Pember said. After observing pulsars through FAST, scientists found that gravitational waves, black holes and other major breakthroughs that won the Nobel Prize in physics are directly or indirectly related to pulsars. In the future, gravitational waves are likely to benefit human beings as electromagnetic waves do now.

FAST can not only search for interstellar communication, but also search for extraterrestrial civilizations. To date, more than 4,500 extrasolar planets have been discovered, and water has been found on Europa, Mars and Saturn. In addition, the limits of life on Earth are being rewritten. Hundreds of hydrothermal vents in the Sea of Cortez in southern California are 3,800 meters deep, and temperatures around them reach 287 degrees Celsius, but scientists have still found microbes inside, including a blue microbe for the first time. In 2012, an international team of scientists using the Deep Earth exploration vessel Geju dug a further 2,466 meters into the ocean floor off Aomori prefecture, Japan, at a depth of 1,180 meters, and found that each cubic centimeter of sediment contained fewer than 100 microscopic microbial cells.

Peng bo said that these new discoveries on Earth and outside the solar system, all make the possibility of life outside the Earth is constantly supported, "The signal received by FAST is also likely to have the signal of alien civilization, but we do not have the time to identify, the United States in the 1960s did."

What if I do find one?

Although radio telescopes passively receive signals rather than emit radio signals, exploring extraterrestrial civilizations has always been part of their mission. And the scientific community is divided on whether to pursue extraterrestrial intelligence, with the core of the disagreement centered on whether to actively send radio into outer space.

Explorations of Extraterrestrial Civilization by historians of science Mu Yunqiu and Jiang Xiaoyuan From Science to Fantasy, the Nobel Prize-winning radio astronomer Martin Ryle objected to the first interstellar radio message sent from the Arecibo Radio Telescope to the globular cluster M13 on Nov. 16, 1974, He warned that "any life in outer space can be malevolent and hungry" and called for an international ban on any attempts on Earth to establish contact with and transmit signals to extraterrestrial life.

Ryle's idea has had its adherents for decades, especially in science fiction movies and novels. In the movie Alien, the scarier-looking alien creatures come to Earth and give us countless nightmares. In the novel "The Three-Body Problem", Ye Wenjie ignored the warnings of aliens and kept sending signals into space, which eventually attracted the Trisolarans, and the Earth was attacked by the more powerful Trisolaran civilization. Seti also argues that the more important question for humanity in the search for extraterrestrial civilizations is: what if we do find one?

"In fact, the arecibo radio Telescope's signal to the M13 globular cluster is more than 25,000 light-years away, so it's a bit 'alarmist' to discuss whether it could attract aliens, which is why we're looking for extraterrestrial intelligence in our immediate universe." And the likelihood of events such as asteroid impacts in the nearby universe is still high, says Pomber, adding to the need for astronomy to play a role.

On October 31, 2021, Wu Xiangping also revealed that China will build another five telescopes of the same class, and now form a huge array of FAST, by which time, China's astronomical exploration will lead the world for 50 years.

Related news
Windows 10 May 2019 Start Menu Improvement Inventory: More Simple and Fashionable (Figure)
Microsoft will block Windows 10 May 2019 updates for these devices
In addition to the Sandbox, Windows 10 May 2019 has these small improvements worthy of attention (Figure)
HIV CURE FOUND
Microsoft promises to fix four major problems of Windows 10 May 2019 before the end of the month (Figure)
RTM Windows 10May 2020 Experience Report: Finding Three Important Things
Windows 10 may 2020 enable new features: prevent PC from installing PUA app
Windows 10May 2020 information summary: release time, new features, etc .(figure)
Windows 10 may 2020 ready to launch: inventory of major new features (Figure)
HERPES CURE FOUND
Hot news this week
ByteDance invested in Sequencing Technology, which is an AI industrial SaaS software service provider
It's hard to escape the monopoly sanctions American court dismissed Facebook against FTC counterattack
Former search president of Baidu xiang Hailong joins Transsion The company that sells mobile phones wants to do more Internet
2021 Global Patent List Released: Huawei ranked fourth in the top five in the world in the United States
Jiangxi Bank welcomes the new sector, the former is dismissed, and the profit has decline since the listing since the market.
The Shanghai Astronomical Observatory found a case of a galaxy "escaping" 12.1 billion light-years away
Rewrite history! The largest acquisition in the game industry was finalized: 80.9 billion yuan exceeded Tencent's record
Ma huateng: Tencent is just an ordinary company that can be replaced at any time
Enterprise WeChat active users reached 180 million The new version is connected with the video number
Lanzhou Bank was abandoned to buy 12.85 million yuan, and the first issuance was "broken", still 4 times more expensive than its peers
The most popular news this week
Build a car in an average of 34 seconds! The annual production capacity of Tesla's Shanghai factory may exceed 1 million units
Due to the false statement of leshi securities, shanxi securities subsidiary was sued for 4.571 billion yuan
Realme China President Xu Qi: Dynasty "The most popular science and technology" ""
Tesla is still a "fragrant feast" The four Indian states invited him to set up a factory in the local area
Reduce dependence on China? Tesla gets key battery materials from Mozambique
Lei Jun suggests that Xiaomi 12 series is about white
Netizens opened the Xiaomi router 4 four years ago: I found "ARE YOU OK!!!"
A hardware conference, why talk about software but more time?
The chip is comparable to the Mac, the computing power exceeds the iPhone, and the Apple AR/VR headset is really so strong?
Can working in the metasverse be more productive? Lenovo's Huang jianheng: There are also complex technical challenges