After Tesla, the United States has its eye on Airbnb?

After Tesla, the United States has set its sights on Airbnb, a global homestay short-term rental apartment booking platform.

The latest reuters news said that two US congressmen expressed so-called "concerns" about Airbnb's business activities in China's Xinjiang on the 7th local time. The anti-China forces in the United States have always been prejudiced and paranoid on Xinjiang-related issues, as well as their intention to exert pressure on enterprises, have once again been exposed. 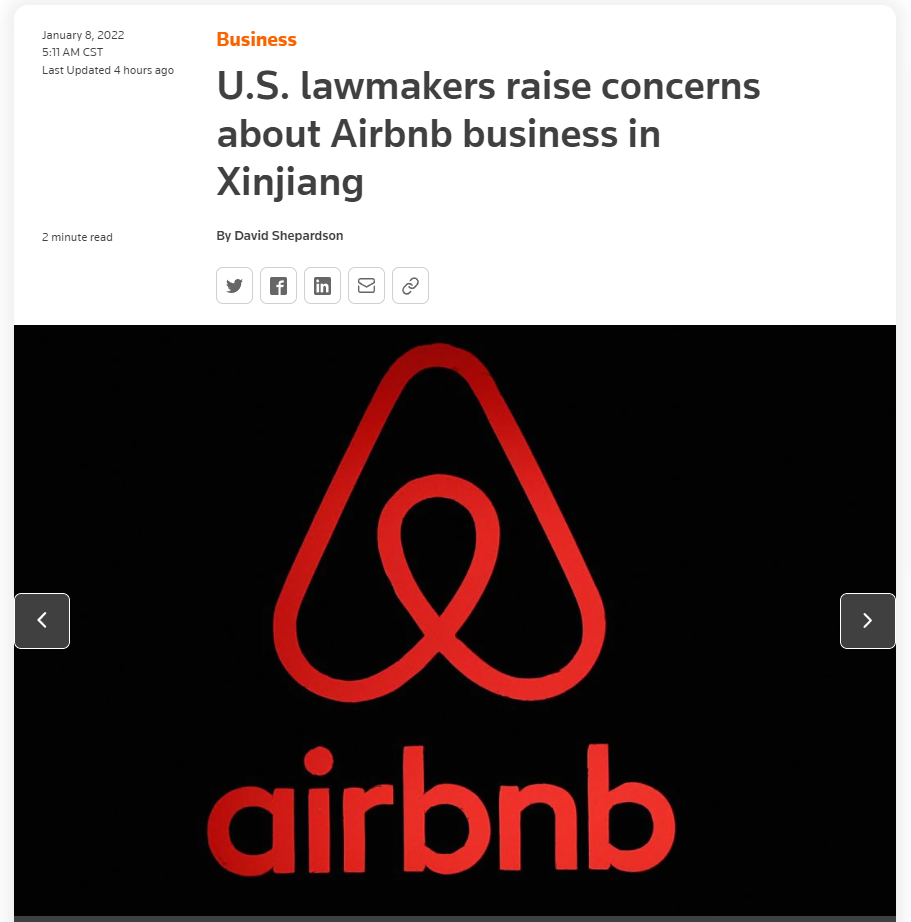 The two lawmakers are Democratic Senator Jeff Merckley and Rep. Jim McGowan. They wrote to Airbnb asking about some of the company's listings and other questions in China's Xinjiang.

The two Democratic members serve as chairman and co-chair of the U.S. Congressional and Executive Committee on China (CECC). But not only are they fussing about Xinjiang-related issues, but according to Reuters, they are also reaching out to the upcoming Beijing Winter Olympics to take advantage of the opportunity to speculate — claiming to "raise 'questions' about Airbnb's human rights and anti-discrimination commitments in China because the company sponsored the Beijing Winter Olympics."

These anti-China forces have repeatedly linked Xinjiang to unwarranted Western allegations of "human rights violations," implying that the intention of exerting pressure has become worse and worse. Reuters said the Chinese Embassy in Washington again denied the existence of so-called "abuses" in Xinjiang on Friday and said some members of Congress had "repeatedly hyped up the issue and put pressure on businesses," the statement said, adding that some lawmakers had "malicious intentions to use political conspiracies to kidnap businesses and use the Xinjiang issue to suppress China."

In the face of some people in the United States and the West maliciously hyping up the Xinjiang issue, the Chinese side has already made clear responses on many occasions and exposed its lies through a large number of facts. The Spokesman of the Chinese Foreign Ministry has repeatedly affirmed that the US side maliciously slanders the human rights situation in Xinjiang, seriously violates international law and basic norms governing international relations, and grossly interferes in China's internal affairs. The so-called existence of "forced labor" and "genocide" in Xinjiang is a vicious lie concocted by anti-China forces. The United States itself has a bad record, and it is a slippery slope to accuse and smear China on the issue of human rights.

Previously, Tesla was also besieged by anti-China forces in the United States for opening a store in Xinjiang, China. The Global Times commented that Washington has concocted a "terrible" story of Xinjiang, and that all the crackdowns are based on this absurd story. Therefore, Washington's threat to intimidate Tesla is to create an atmosphere of terror and deter more "retrogrades" from appearing. But this kind of political high-profile is actually an extreme lack of heart.

Related news
@666 Join illuminati Kingdom in United Kingdom +27839387284
Strong Money Spells in United States (USA) | spiritual rats
here.@ ***
Hot news this week
Monkey acne cases have ranked first in the world that the United States has announced the emergency state of public health
Credit card points rule intensive adjustment online transaction points more "valuable"
High reserves and low cost experts: calcium ion batteries replace lithium batteries to stand up to the daily
Losses in a single quarter of $ 23.4 billion a record, SoftBank did not carry the plunge of technology stocks and the devaluation of the yen
Alibaba executives interpret financial results: the focus of the consumer side is no longer to attract new, but to do a good job in stratified operation
The prevention and control of the American Monkey epidemic has failed. What should I pay attention to?
Sources say Samsung's Galaxy Z Fold4 is going up in price: a 512GB top unit will cost more than 13,000
Is the micro -business headache? WeChat friends are suspected to have a big move: 7 can only be posted a week
Kuaishou launched a self-developed cloud intelligent video processing chip: The chip has been streamed successfully
The new product of Xiaomi MIX is coming: both internal and external dual -screen has been upgraded to make up for the previous generation.
The most popular news this week
Wechat update 8.0.27 beta version: small program opening faster
Zte launches 5G smart helmet: Support voice control, gas detection and other functions
Meizu application Flyme Auto trademark: flyme is really going to get on the car
Do you get enough sleep every day? Girls get the worst of it: Put down your phone
Baidu account online rename function: those unbearable network names can finally be replaced
The outstanding student secretary went behind the scenes and Gree successfully registered the trademark of "Pearl Feather Child"
Ali's largest shareholder sells 34.5 billion US dollars: completely losing the board seat
Meizu Pandaer Great: All products are reduced by 200 and 30 -containing mobile phone cases, heat dissipation back clamps
Domestic brands killed 5999 yuan folding screen phones this year bucked the trend: up 73%
Xiaomi House clerk was exposed to the official response of customers' mobile phone consumption