Mi 12 series can be upgraded to 64-bit applications with one click. Older models are not supported

Xiaomi 12 series product manager @cICI_ Lao Wei said on weibo today that currently, Xiaomi 12 series, has support in the App store to support the App upgrade to 64-bit version, upgradable apps will be marked after the name. The following are the steps: 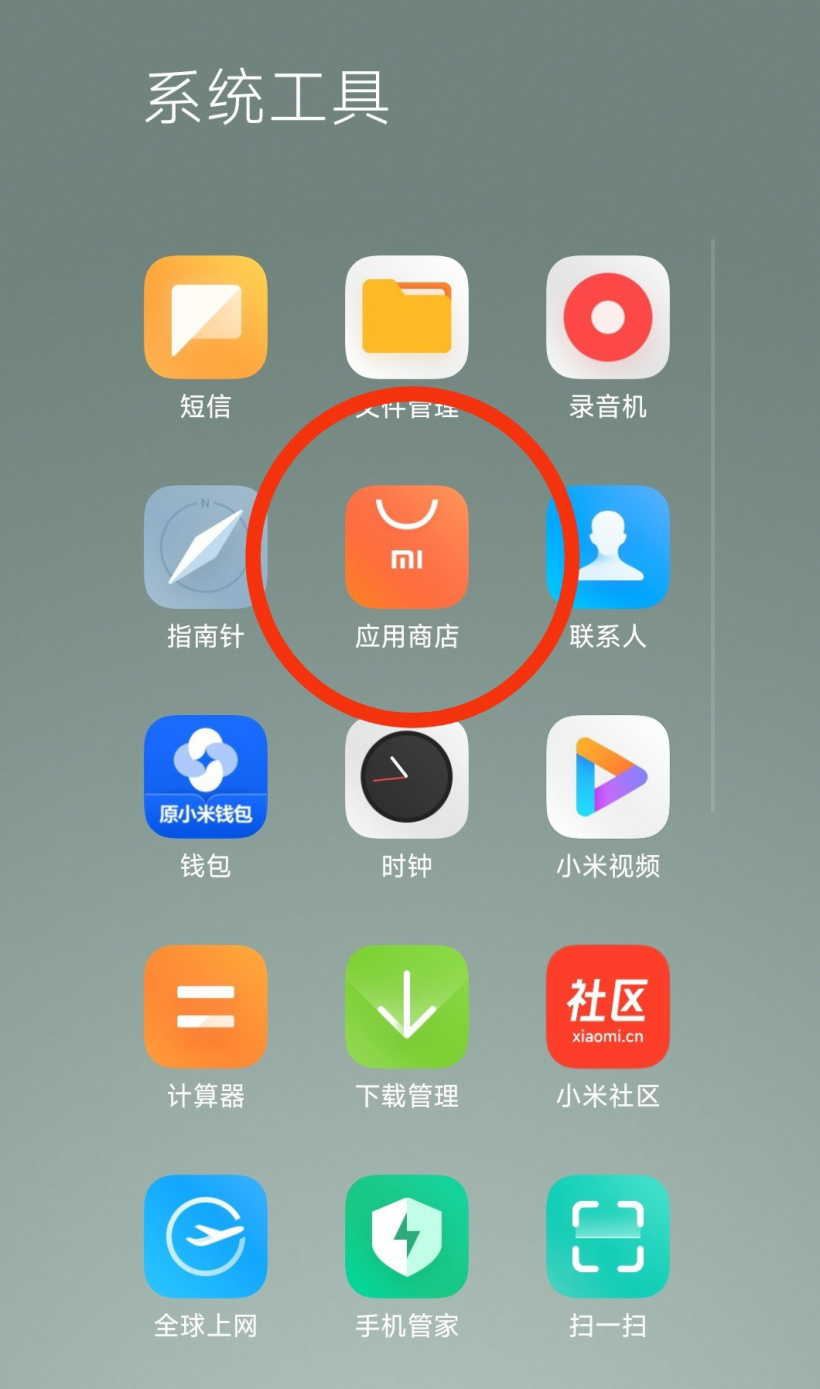 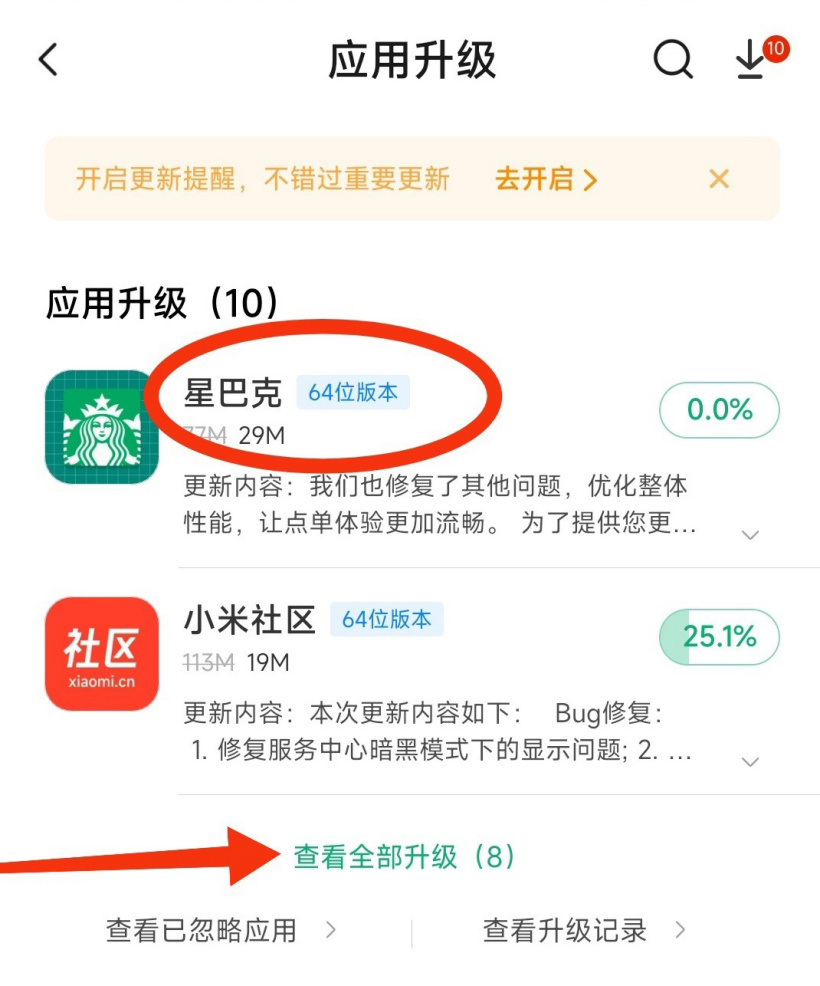 Cici_ Wei said the battery life of the Mi 12 series will be significantly improved after the upgrade to 64-bit apps. For example, I woke up at 9 a.m. and stayed up until midnight. The screen was on for 5 hours and 31 minutes, and I used it for 13 hours and 29 minutes. During this period, I charged for a period of time, and the battery was still 25%. 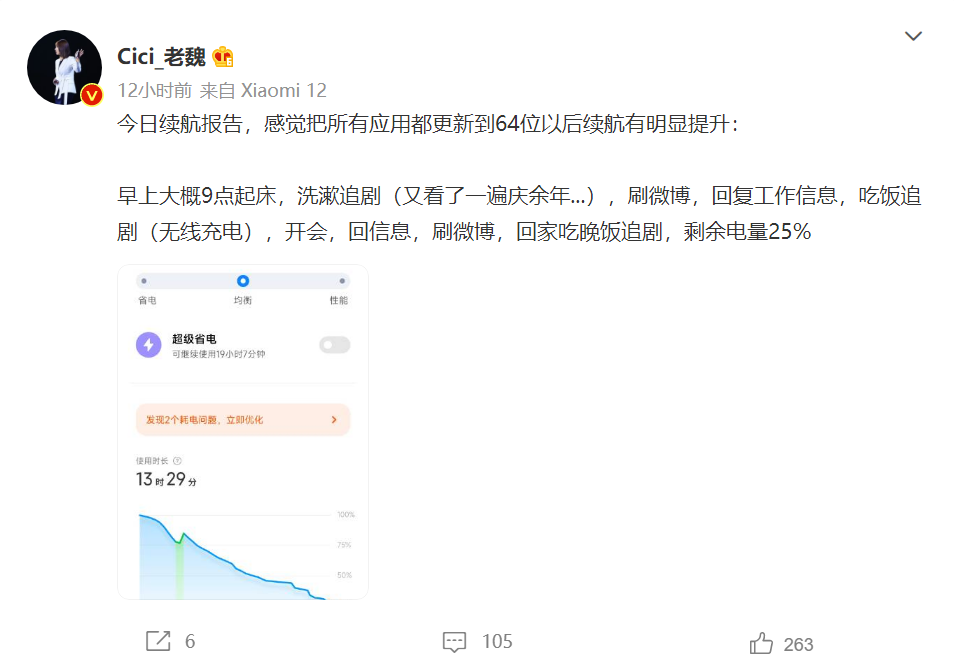 Android 12 and Snapdragon 8 Gen 1 have the latest architecture, and running 32-bit apps may be a bit of an error, as snapdragon 8 Gen 1 only has three Cortex-A710 cores that can run 32-bit apps, IT Home has learned. Currently, Xiaomi phones powered by chips such as Snapdragon 870 and 888 do not need to update to 64-bit apps in the app store.

Related news
[Download] Kubuntu 19.04 Release: Upgrade KDE Plasma 5.15.4 and KDE Applications 18.12.3
Foreign media: millet disbanded the Mi VR team
How to Evaluate the New Changes of Apple Watch Series 5
iPhone 12Pro/Pro Max exposure :10 bit hypervideo screen ,6 128GB started
Disassembly report: Mi Xiaomi 6700mah 50W fast charging two in one charger ad55
First 18bit ISP: Snapdragon 8 lifts the ceiling of mobile photography to new heights
Hot news this week
ByteDance invested in Sequencing Technology, which is an AI industrial SaaS software service provider
It's hard to escape the monopoly sanctions American court dismissed Facebook against FTC counterattack
Former search president of Baidu xiang Hailong joins Transsion The company that sells mobile phones wants to do more Internet
2021 Global Patent List Released: Huawei ranked fourth in the top five in the world in the United States
Jiangxi Bank welcomes the new sector, the former is dismissed, and the profit has decline since the listing since the market.
The Shanghai Astronomical Observatory found a case of a galaxy "escaping" 12.1 billion light-years away
Rewrite history! The largest acquisition in the game industry was finalized: 80.9 billion yuan exceeded Tencent's record
Ma huateng: Tencent is just an ordinary company that can be replaced at any time
Enterprise WeChat active users reached 180 million The new version is connected with the video number
Lanzhou Bank was abandoned to buy 12.85 million yuan, and the first issuance was "broken", still 4 times more expensive than its peers
The most popular news this week
Build a car in an average of 34 seconds! The annual production capacity of Tesla's Shanghai factory may exceed 1 million units
Due to the false statement of leshi securities, shanxi securities subsidiary was sued for 4.571 billion yuan
Realme China President Xu Qi: Dynasty "The most popular science and technology" ""
Tesla is still a "fragrant feast" The four Indian states invited him to set up a factory in the local area
Reduce dependence on China? Tesla gets key battery materials from Mozambique
Lei Jun suggests that Xiaomi 12 series is about white
Netizens opened the Xiaomi router 4 four years ago: I found "ARE YOU OK!!!"
A hardware conference, why talk about software but more time?
The chip is comparable to the Mac, the computing power exceeds the iPhone, and the Apple AR/VR headset is really so strong?
Can working in the metasverse be more productive? Lenovo's Huang jianheng: There are also complex technical challenges