Collection of micro network news, 2021 fiscal year, AMD has created a record in many ways. The company has achieved rapid growth in income in the core business of the 2021 fiscal, and increasing income expectations in the past two quarters.

In this regard, the Wall Street Enterprise Financial Analysis Institutions seeking the overall status of AMD past a fiscal year.AMD's revenue increased by 54% year-on-year in the third quarter, and created $ 4.31 billion under the guidance of the company's strong implementation. Calculation and graphics business, Ryzen, Radeon, and AMD Instinct processors that players players have created $ 2.4 billion in the third quarter, an increase of 44% year-on-year.

Due to the strong demand of the terminal market, the average price / ASP of the processor continues to rise in the third quarter. Among them, the fastest grow is AMD because the customer has accelerated the absorption speed of the EPYC server processor.In the third quarter, AMD corporate business revenue increased by 69% year-on-year to $ 1.69 billion.

In the third quarter, AMD business revenue increased by 69% year-on-year to $ 1.69 billion. The company expects total revenue in fiscal year by 65% year-on-year. 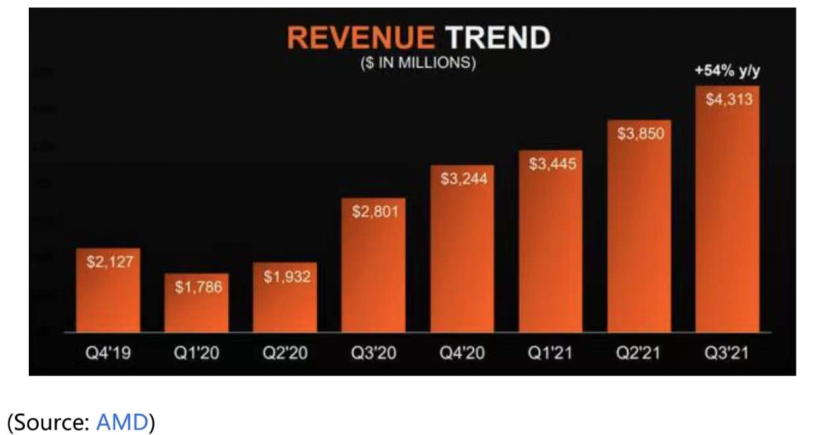 In recent years, AMD will receive the revenue of each quarter.

British Weida and AMD have announced the current review of regulatory agencies. Ying Weida wants to acquire the UK's ARM to obtain the right to use its chip architecture and save license fees.AMD wants to acquire XiLinx to strengthen its data center business and obtain a synergistic effect from the business combination.To this end, in October last year, in a proposed $ 35 billion transaction, AMD proposed to exchange the E-sharing equity at 1.7234 shares AMD stocks. The transaction is currently under review of the General Administration of Market Supervision and Administration of China. It is expected that the final decision will be made soon. Because AMD has made concessions to the anti-monopoly regulatory authority, it is guaranteed that the transaction will not affect the Chinese market, so the possibility of approved by the transaction has increased. The report also appears that the transaction will be approved. Recently, the share price of AMD has experienced 16%, and part of the reason is that the market is cautious before the Chinese regulatory authorities make a transaction decision. If the acquisition is approved, AMD's share price may rebound.

AMD's free cash flow has a significant improvement in the first quarter of 2021, the reason is that the terminal market is strengthened to processors, and the product pricing is improved, and the profit margin increases.The prospect of AMD's free cash flow is still underestimated. However, due to strong market conditions, AMD's products still have a high demand. In the third quarter, AMD produced a free cash flow of $ 764 million, with sales of 4.13 billion US dollars. In this case, the free cash stream profit is 18%. The free cash flow in the third quarter of 21 was 2.9 times year-on-year, because the large-scale revenue growth of AMD and the improvement in income to cash.

The free cash stream profit margin of Nine months ago, the AMD's 2021 fiscal year is 21%. If the pricing of the client processor ASP is strong in the 2022 fiscal year, AMD will reach 30% next year.

AMD currently has one of the most powerful product lineups in recent years.The Ryzen game processor is being out of sale, and the AMD's Radeon graphics card is also true. These products are particularly welcomed by gamers. The shortage of GPU, and part of the reason is the demand for encrypting monetary miners, causing the market price of the graphics card to soar, driving average sales prices. AMD has also achieved great success in its third-generation EPYC server processor, which provides faster application performance and improves commercial productivity based on the ZEN 3 micro-architecture of the AMD third generation EPYC server.

AMD will launch new processors next year, which may result in income acceleration growth and increase in free cash.

With the start of new upgrade cycles, this can lead to acceleration and higher free cash stream profitability growth.

The new upgrade cycle begins. In the first quarter of 22 years, AMD will introduce a new server chip for the first time, namely Milan-X CPU.

MILAN-X CPU, which is based on AMD's new 3D-Cache technology, and promises to increase performance by 50%.The release of the new MILAN-X processor can lead to acceleration of server CPU sales.In the 2022 financial year, the server CPU sales of the AMD's entries will be accelerated.

AMD and NVIDIA are great companies with excellent products, but I think AMD is better, because it grows with respect to NVIDIA. AMD is expected to produce $ 19.1 billion in income in the financial year of 2022, which is highly estimated to be the value of AMD. I believe that AMD will produce $ 21.7 billion in income +/-800 million in fiscal year, and the company's growth rate will continue to exceed the speed of market forecast, because product pricing and demand for processors are entering 2022 fiscal year It is still strong. 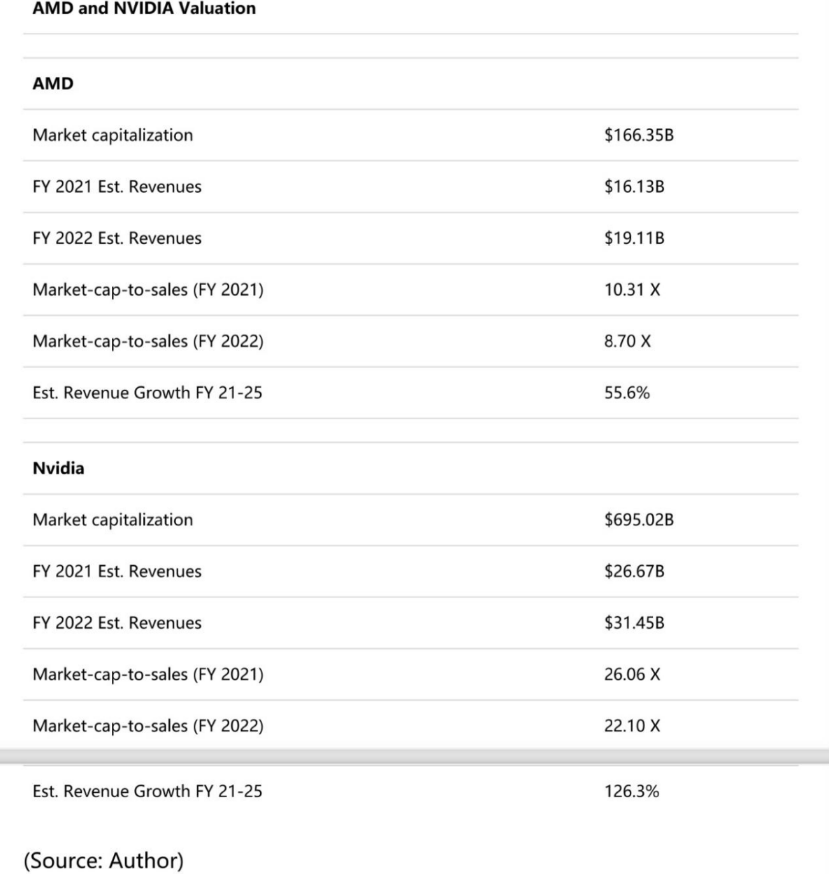 The gross profit margin of AMD has increased by 4 percentage points year-on-year, and it is estimated that in the financial year of 2022, AMD will be able to expand the recent growth rate growth.Due to the advantages of GPU pricing and server market growth, gross profit margin decreases and the average price of CPU and GPU may be a warning signal, indicating the slowdown of income. 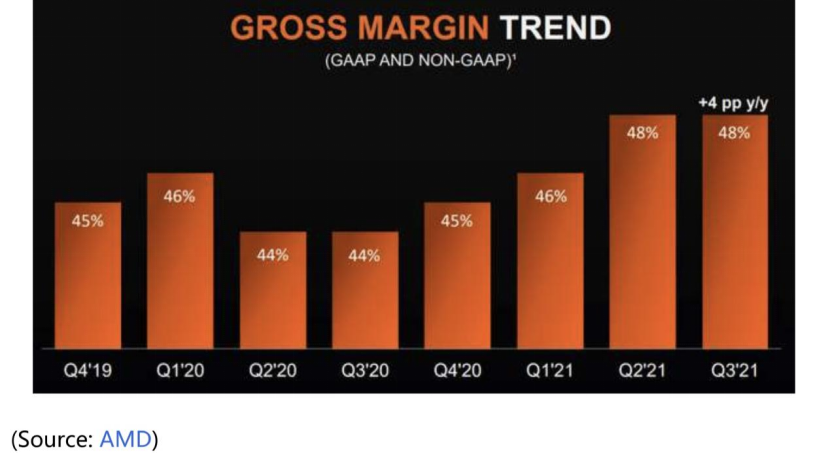 In recent years, the gross profitability situation of each quarter AMD

AMD will continue to grow its core business in the fiscal year 2022, especially in server business. Even compared with the 20021 fiscal year, income acceleration is not possible. Considering that AMD will launch new high-performance server chips next year, this will expand a new upgrade cycle. (Proceedient / yuki)

Related news
Interpretation of AMD New Architecture with Ten Thousand Words and Long Texts
Why does Huawei's "new IP" encounter new problems?
What exactly is Jim Keller thinking about leaving Intel chip God?
Foreign media: NVIDIA、AMD server chip sales are increasing
AMD's happiness, Intel does not understand
AMD2021 fiscal year 20022 first push new server chip
Hot news this week
ByteDance invested in Sequencing Technology, which is an AI industrial SaaS software service provider
It's hard to escape the monopoly sanctions American court dismissed Facebook against FTC counterattack
Former search president of Baidu xiang Hailong joins Transsion The company that sells mobile phones wants to do more Internet
2021 Global Patent List Released: Huawei ranked fourth in the top five in the world in the United States
Jiangxi Bank welcomes the new sector, the former is dismissed, and the profit has decline since the listing since the market.
The Shanghai Astronomical Observatory found a case of a galaxy "escaping" 12.1 billion light-years away
Rewrite history! The largest acquisition in the game industry was finalized: 80.9 billion yuan exceeded Tencent's record
Ma huateng: Tencent is just an ordinary company that can be replaced at any time
Enterprise WeChat active users reached 180 million The new version is connected with the video number
Lanzhou Bank was abandoned to buy 12.85 million yuan, and the first issuance was "broken", still 4 times more expensive than its peers
The most popular news this week
Build a car in an average of 34 seconds! The annual production capacity of Tesla's Shanghai factory may exceed 1 million units
Due to the false statement of leshi securities, shanxi securities subsidiary was sued for 4.571 billion yuan
Realme China President Xu Qi: Dynasty "The most popular science and technology" ""
Tesla is still a "fragrant feast" The four Indian states invited him to set up a factory in the local area
Reduce dependence on China? Tesla gets key battery materials from Mozambique
Lei Jun suggests that Xiaomi 12 series is about white
Netizens opened the Xiaomi router 4 four years ago: I found "ARE YOU OK!!!"
A hardware conference, why talk about software but more time?
The chip is comparable to the Mac, the computing power exceeds the iPhone, and the Apple AR/VR headset is really so strong?
Can working in the metasverse be more productive? Lenovo's Huang jianheng: There are also complex technical challenges