The largest acquisition in the history of the gaming industry is finalized.

"Grand Theft" and 2K game developer Take-Two announced Monday in cash plus stock.Spent $12.7 billion (editor's note: about $80.9 billion) to acquire social gaming giant Zynga。 Based on Zynga's share price last Friday, the offer of $9.86 per share equates to a premium of 64 percent; each Zynga stock receives $3.50 in cash and $6.36 worth of Take-Two shares.

The deal is expected to close on June 30 this year. Once the acquisition is complete, Zynga will continue to operate as an independent subsidiary of Take-Two, continuing to be led by the current CEO and holding two seats on Take-Two's board of directors.

Netizens who remember the "stealing vegetables" game may know Zynga, and the stealing games that were popular in domestic Happy Network and Tencent games at that time were all imitations of the successful model of the social game giant on Facebook.

Zynga was founded in San Francisco in 2007 by founder Mark Pincus, an early investor in Facebook, and Zynga's name and logo come from Pincus' pet bulldog, Zinga.

Of course, with such a dog-loving founder, Zynga also welcomes employees to bring pets to work. More than a decade ago, Zynga was San Francisco's hottest startup, with a staff treatment comparable to Google's and the most interesting company culture.

The company's headquarters, also known as the "Dog House", is available from a games room, basketball court, and gym.

In 2009, Zynga launched farm game FarmVille on Facebook, and the idea of stealing vegetables was all the rage, achieving 10 million daily lives in just six weeks, and surpassing 80 million users the following year. In 2010, Zynga launched the city game CityVille, which was once again a huge success, achieving a monthly activity exceeding 100 million in just 41 days. In December 2011, Zynga was successfully listed on the NASDAQ.

However, success in the social gaming space comes and goes quickly. In 2013 alone, Zynga was in a state of decline in both users and revenue, with nearly half fewer users than in 2012, and had to start layoffs and shrinking businesses. Pinkus also had to resign as CEO and bring in Don Mattrick, president of Microsoft's interactive entertainment division, as CEO.

But in less than two years, Zynga, whose business has not improved, has changed coaches again, bringing in Frank Gibeau, head of Electronic Arts's mobile department, as CEO. Over the past few years, Zynga has continued to dominate social games on mobile phones, with major successful game products including Zynga Poker and Words with Friends 2.

After today's trading news was announced, Take-Two shares plunged 15% and Zynga shares soared 45%. The main concern of the market is that Take-Two is paying too much for Zynga. Zynga shares have fallen 40 percent in the past year's big bull market in the U.S. stock market and are now at their lowest point in the past five years. One of the main reasons for the stock price plunge was Apple's tightening of mobile privacy controls, which prevented Zynga's targeted advertising business from accessing user data.

Console gaming giant Take-Two acquired Zynga with the apparent goal of expanding its mobile business. Take-Two CEO Strauss Zelnick said that after the acquisition of Zynga, more than half of the company's net scheduled revenue will come from the mobile sector, and the total number of users will exceed 1 billion.

While Grand Theft Auto is one of the world's most successful console games, with cumulative sales of more than 155 million copies over the past eight years, Take-Two is still under pressure for slow growth. The company expects fiscal year revenue to be $3.35 billion to $3.45 billion.

As smartphones become the internet access and entertainment centers for people around the world, mobile games have gradually become the biggest cake in the game industry. Although Take-Two has been a huge success in console games such as Grand Theft Auto, their mobile business has grown slowly, and the mobile game business currently accounts for only 10% of revenue. Taking down Zynga is obviously about gaining users in the mobile space and expanding new free-to-play modes.

It is worth mentioning that in February last year, Electronic Arts beat Take-Two and won Codemaster for $1.2 billion. Perhaps the deal has also spurred Take-Two to seek bigger acquisition targets. 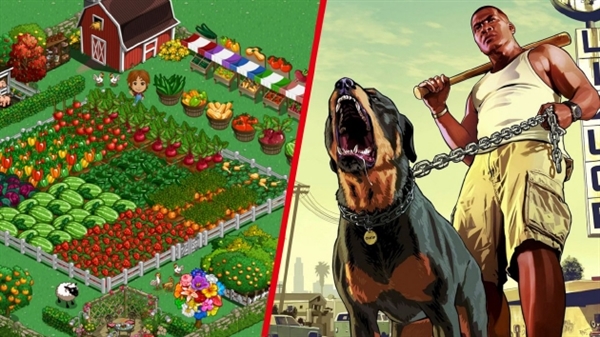 Related news
The linely group's best mobile processor of the year: God u Kirin 810 wins the title
Tencent calls on global talents to participate in the Trinity challenge to cope with major public health crisis with innovative thinking
The update of windows 10 results in the paralysis of file history of some users (Figure)
Hot news this week
The developer of the dating app Tinder has reached an agreement with Google over billing rules for its app store
Red Elf Lightning erupts in the Himalayas Spectacular Spectacle: Experts Reveal What Exactly Is This?
The founder of the Internet Quick Hand Su Hua was taken away for investigation, and the fast hand responded: the news was not true
Or for Studio Display Pro, the release of Apple's 27-inch Mini LED-backlit Display has been delayed by October
One picture to understand! Blue Factory has issued 3 new machines in a row: self-developed chip blessing, the narrowest lower border
Huawei and the Chinese Academy of Sciences jointly developed the new 3D DRAM solution is expected to break through the key root technology of storage
Tencent established a smart technology company in Chengdu, and its business scope includes Internet data services
I once touched the ceiling of the mobile phone screen! Well-known brands announced that the new flagship is the first to carry the Snapdragon 8+
Or has it been spread insidiously in Communities in Europe and the United States: Should We Be Worried About Monkeypox? Experts demystify
Economist credit card monthly bill $11.4! Only paying for a purchase of Tencent Music, the account manager is busy "condolences"
The most popular news this week
Pinduoduo Q1 revenue of 23.8 billion increased by 7% Technology and agricultural strategy into a dual engine
Musk: Tesla peripheral products can be purchased with Dogecoin
Luo Dayou Sun Yanzi brushed the scenes behind the screen and Tencent began to grab traffic again
Pinduoduo revenue in the first quarter of 23.8 billion increased by 7% year -on -year
Chinese stocks closed mostly up on Friday, Pinduoduo rose more than 15% Kingsoft Cloud rose more than 7%
Expert: Concerns that emojis cause expression to feel less susceptible may be exaggerated
The Changwu B rocket arrives at the Wenchang launch site and will launch the Wentian Experimental Module of the Chinese space station in July
The DuckDuckGo browser was found to have quietly allowed Microsoft to track it
Pinduoduo released the first quarter report, with a revenue of 23.8 billion yuan, starting the technology flow
Can air disinfection stick kill 99.9%coronary virus? Experts: Several levels of concentration are different