The Shanghai Astronomical Observatory found a case of a galaxy "escaping" 12.1 billion light-years away

On January 11, the reporter learned from the official website of the Chinese Academy of Sciences that the early universe and high redshift galaxy clusters of the Shanghai Astronomical Observatory analyzed the observation data of the Hubble Space Telescope (HST) deep-field GOODS-S.A galaxy with Lyman's ionized photon escape was found 12.1 billion light-years away (redshift 3.8).The discovery of this galaxy provides an ideal object for exploring the process by which galaxies drive the reionization of the universe. 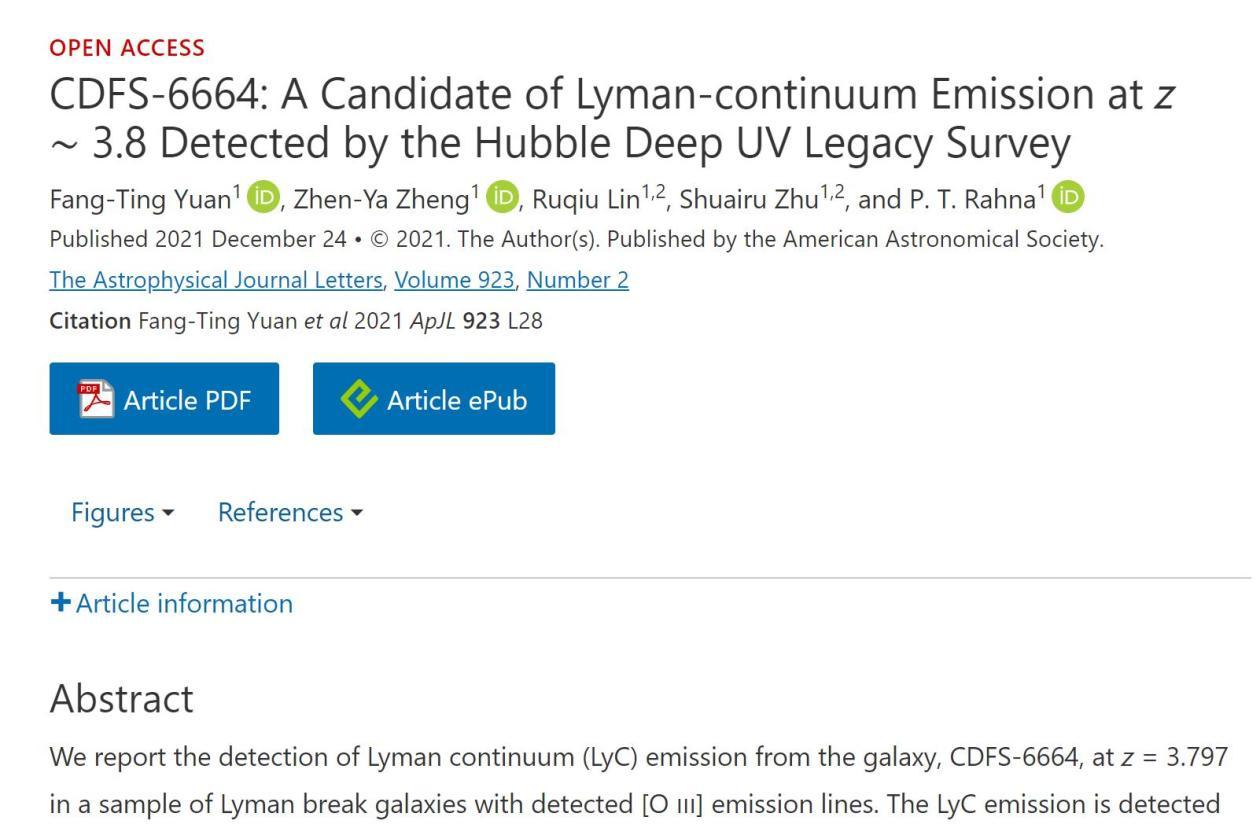 It is reported that the relevant research results were published in The Astrophysical Journal Letters.

According to reports, the cosmic reionization process occurred about 13 billion years ago, involving the birth of the first generation of celestial bodies in the universe and the last major phase transition of the entire universe. In this process, the most abundant element in the universe, "hydrogen", becomes the whole ionization of hydrogen in the environment of overall neutral hydrogen, under the ionization of ultraviolet photons produced by first-generation stars, galaxies and black holes. Therefore, the study of cosmic reionization is one of the frontiers of current astronomy. Both the Webb (JWST) Space Telescope and the Next Generation Square Kilometre Array Radio Telescope (SKA) incorporate "cosmic reionization" into core science goals. 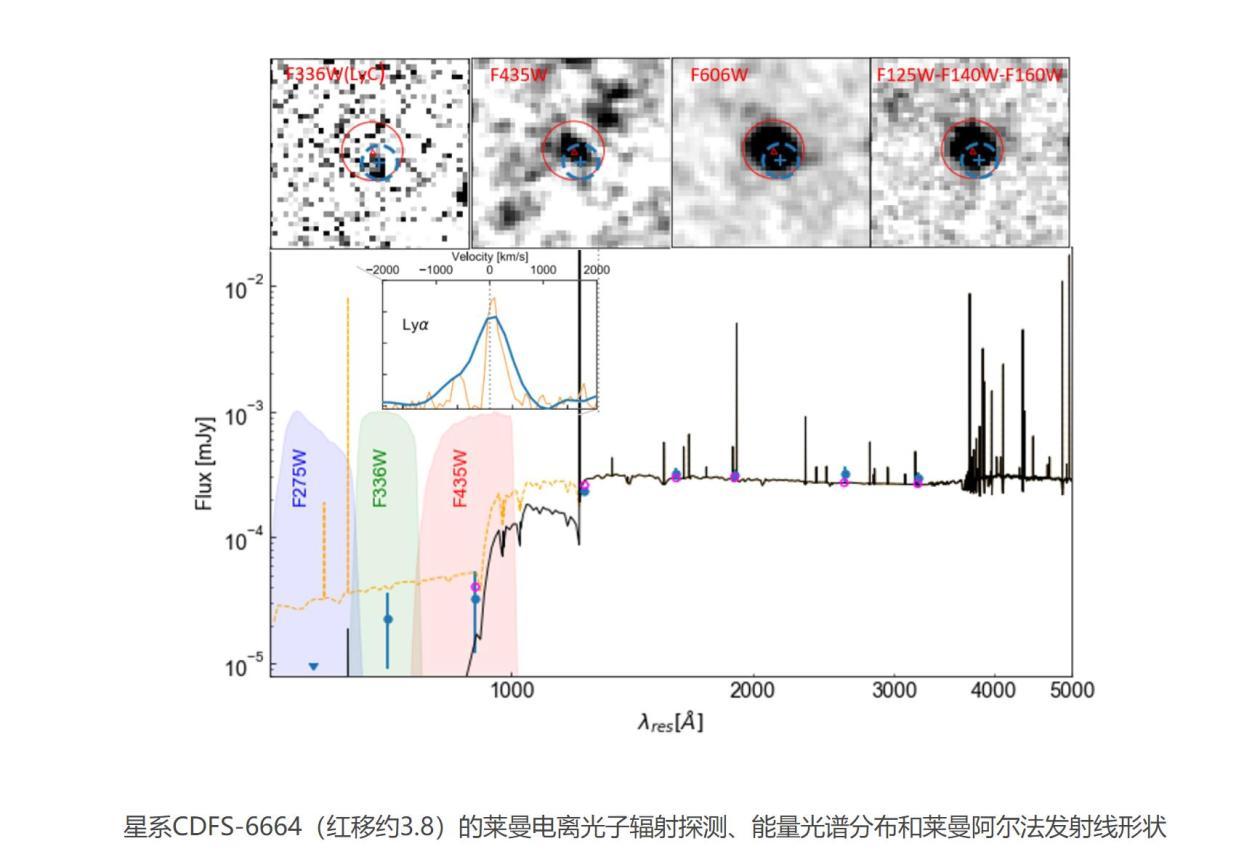 In the study, researchers used space UV deep field data to systematically search a group of galaxies with strong emission lines, and found that one of the galaxies, CDFS-6664, had a signal-to-noise ratio of more than 5 on the Hubble UV deep field image.According to the redshift of the galaxy (3.797), the signal comes from Lyman ionizing photon radiation, indicating that the galaxy is more likely to have Lyman ionization photon escape.

Yuan Fangting, the first author of the paper and an associate researcher at the Shanghai Astronomical Observatory, introduced: "Through further research, we found that the spectral line shape and spectral energy distribution of the galaxy are in line with the characteristics of the Lyman ionization photon escape galaxy, and also found that the surrounding environment of the galaxy is relatively special, and the quasars such as ionization sources that exist near it are very likely to ionize the neutral absorbers in the direction of sight, making the Lyman ionophotons of the galaxy more easily observable than other galaxies." Combining this evidence, we believe that the galaxy belongs to a high-redshift Lehmann ionizing photon escape galaxy rarely observed in existing observations. ”

Related news
The Features of the Chinese Scholars' Exposing the Orbital Characteristics of the o-star System
Report: this mysterious asteroid will hit the earth in the future
China has found the fastest-rotating star in the Milky Way to date :540 km/s, the star has been flattened
HERPES CURE FOUND
Chinese and foreign scientists jointly released a huge two-dimensional sky map of the universe: 10 trillion pixels contains 2 billion celestial bodies
The Shanghai Astronomical Observatory found a case of a galaxy "escaping" 12.1 billion light-years away
Hot news this week
ByteDance invested in Sequencing Technology, which is an AI industrial SaaS software service provider
It's hard to escape the monopoly sanctions American court dismissed Facebook against FTC counterattack
Former search president of Baidu xiang Hailong joins Transsion The company that sells mobile phones wants to do more Internet
2021 Global Patent List Released: Huawei ranked fourth in the top five in the world in the United States
Jiangxi Bank welcomes the new sector, the former is dismissed, and the profit has decline since the listing since the market.
The Shanghai Astronomical Observatory found a case of a galaxy "escaping" 12.1 billion light-years away
Rewrite history! The largest acquisition in the game industry was finalized: 80.9 billion yuan exceeded Tencent's record
Ma huateng: Tencent is just an ordinary company that can be replaced at any time
Enterprise WeChat active users reached 180 million The new version is connected with the video number
Lanzhou Bank was abandoned to buy 12.85 million yuan, and the first issuance was "broken", still 4 times more expensive than its peers
The most popular news this week
Tesla is still a "fragrant feast" The four Indian states invited him to set up a factory in the local area
Reduce dependence on China? Tesla gets key battery materials from Mozambique
Lei Jun suggests that Xiaomi 12 series is about white
Netizens opened the Xiaomi router 4 four years ago: I found "ARE YOU OK!!!"
A hardware conference, why talk about software but more time?
The chip is comparable to the Mac, the computing power exceeds the iPhone, and the Apple AR/VR headset is really so strong?
Can working in the metasverse be more productive? Lenovo's Huang jianheng: There are also complex technical challenges
Cait: it is not recommended to take quarantine measures directly for travel card users with asterisks
Zhao lijian said the UK's decision to block Huawei under PRESSURE from the US was damaging others and not benefiting itself
Zhao Lijian responded to the British "blocking" Huawei: generalizing the concept of national security harms others and harms themselves