RedMi has previously announced that it will officially launch the K50 universe the first model of K50 in next month, and announced that the machine will be equipped with the Snapdragon 8 processor, equipped with a dual VC heat dissipation system, and the performance is very strong.

According to the relevant explosions, this K50 universe flagship that is the first to debut is not a K50 series of authentic products, but a REDMI K50 e-sports version of the main game experience. 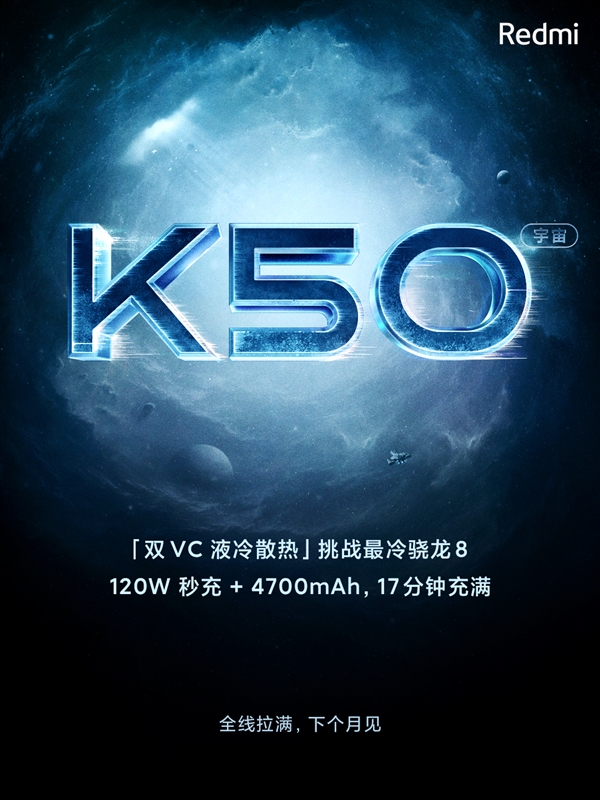 Since it is not a conventional product, it will be more open in terms of body thickness, etc., which is conducive to the stack of internal cooling systems, so that the Snapdragon 8 has a larger output space, and the machine may become the strongest performance of Xiaomi. model.

Some netizens have recently exposed the GeekBench 5 running data of the Redmi K50 e-sports version.Among them, the machine single core 1240, multi-core 3645 points, this score compared to & ldquo; old big brother & rdquo; Xiaomi 12 Pro is not more, even in a single core can be slightly strong. 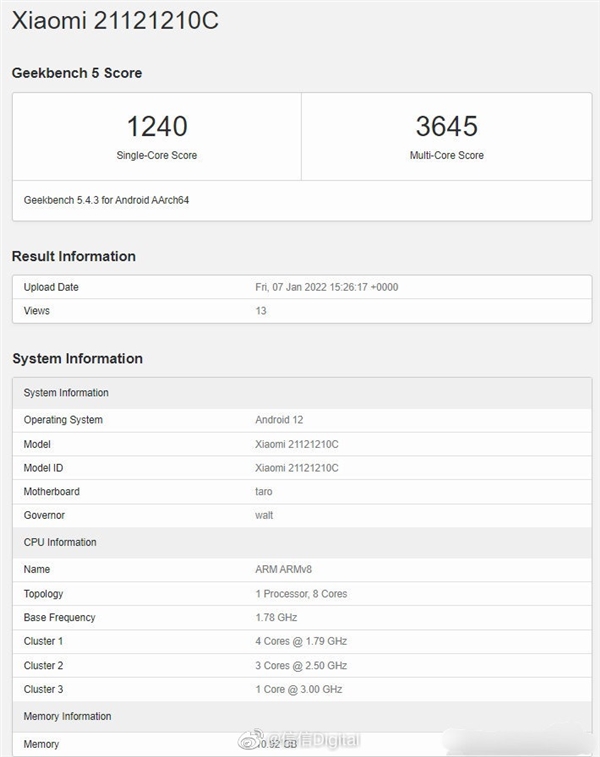 In addition to the core performance, the K50 e-sports version is also excellent in charging,Although there is a built-in 4700mAh large-capacity battery, 120W fairy second charge Pro can be fully charged in 17 minutes, which is the fastest charging speed in the history of REDMI.

in addition,There is also a message that the Redmi K50 electrical version will continue the design of a single-hole vertical screen in the appearance, and the right side of the fuselage also continues to be equipped with a lifting entity shoulder key.Can bring stronger game handling experience.

Overall, the RedMi K50 e-sports version is a top performance flagship that is really born to games, which is significantly improved than the previous generation K40 game version, which is very worth looking forward to.

Related news
Upgrade Xiaolong 898! Redmi K50 release time exposure: closely following Xiaomi 12
Redmi K50 e-sports version has been recorded into the network: or equipped with 4nm Breguet 9000 pre-installed MIUI 13
More than 9000! Redmi K50 new machine broke the news: comparable millet 12
K50 universe! Redmi K50 e-sports version running points straight millet 12 Pro
The K50 universe is truly hopeless! The news said that the Redmi K50 series full punch screen
Redmi K50？ Lu Weibing put on a new mobile phone
Redmi mobile phone 10 points to send benefits: the official hint contains K50 brand new revelations!
Redmi K50 screen specification exposure: Samsung E4 flexible straight screen, center punch
Full line! The K50 esports edition is equipped with Snapdragon 8+ Dual VC Cooling: Perfect tame Snapdragon 8
First IMX596! REDMI K50 e-sports version is equipped with double Sony Camera
Hot news this week
Monkey acne cases have ranked first in the world that the United States has announced the emergency state of public health
Credit card points rule intensive adjustment online transaction points more "valuable"
High reserves and low cost experts: calcium ion batteries replace lithium batteries to stand up to the daily
Alibaba executives interpret financial results: the focus of the consumer side is no longer to attract new, but to do a good job in stratified operation
Losses in a single quarter of $ 23.4 billion a record, SoftBank did not carry the plunge of technology stocks and the devaluation of the yen
The prevention and control of the American Monkey epidemic has failed. What should I pay attention to?
Sources say Samsung's Galaxy Z Fold4 is going up in price: a 512GB top unit will cost more than 13,000
Is the micro -business headache? WeChat friends are suspected to have a big move: 7 can only be posted a week
Kuaishou launched a self-developed cloud intelligent video processing chip: The chip has been streamed successfully
The new product of Xiaomi MIX is coming: both internal and external dual -screen has been upgraded to make up for the previous generation.
The most popular news this week
Ali's largest shareholder sells 34.5 billion US dollars: completely losing the board seat
Meizu Pandaer Great: All products are reduced by 200 and 30 -containing mobile phone cases, heat dissipation back clamps
Domestic brands killed 5999 yuan folding screen phones this year bucked the trend: up 73%
Xiaomi House clerk was exposed to the official response of customers' mobile phone consumption
The laptop is almost burnt by the fire, but the hard disk data can be restored 500GB per day
China's first law bans mobile phones from schools: including children's phones and watches
The second China-led international standard for unmanned aerial vehicles has been officially released
Microsoft claims that Sony pays the developer to block the blockade to prevent the game from logging in to XGP
Chinese anchor accounts have a total of nearly 140 million, have you rewarded it?
Biden signed a chip and scientific bill, a video call of WeChat iOS internal test suspension window, the advanced CPU caused Win11 to be difficult to use, Huawei new machines enter...