Glory CEO Zhao Ming: folding screen gives us a chance to overtake Apple in a curve 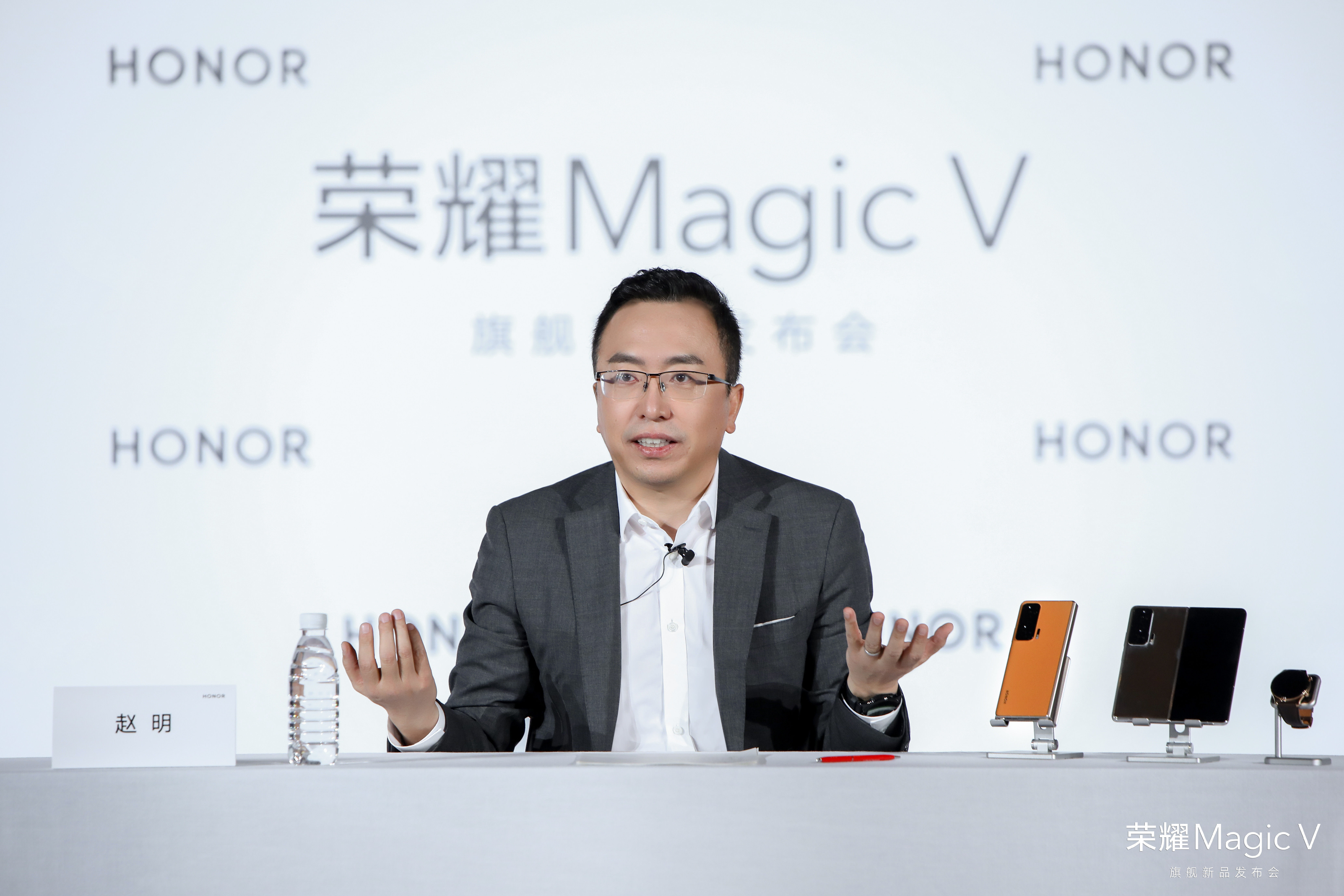 After the launch, Honor CEO Ming Zhao said: "There is no doubt that the foldable phone is an opportunity for Honor to overtake on a curve and prove that Honor can do better than Apple's straight-board, or even better than apple's iPhone."

In fact, Honor has been constantly improving the brand positioning. On August 12, 2021, honor released the honor Magic3 ultimate edition, priced at 7,999 yuan, the highest price in honor's history. The launch of the foldable phone is a good opportunity to promote the brand positioning of Honor. 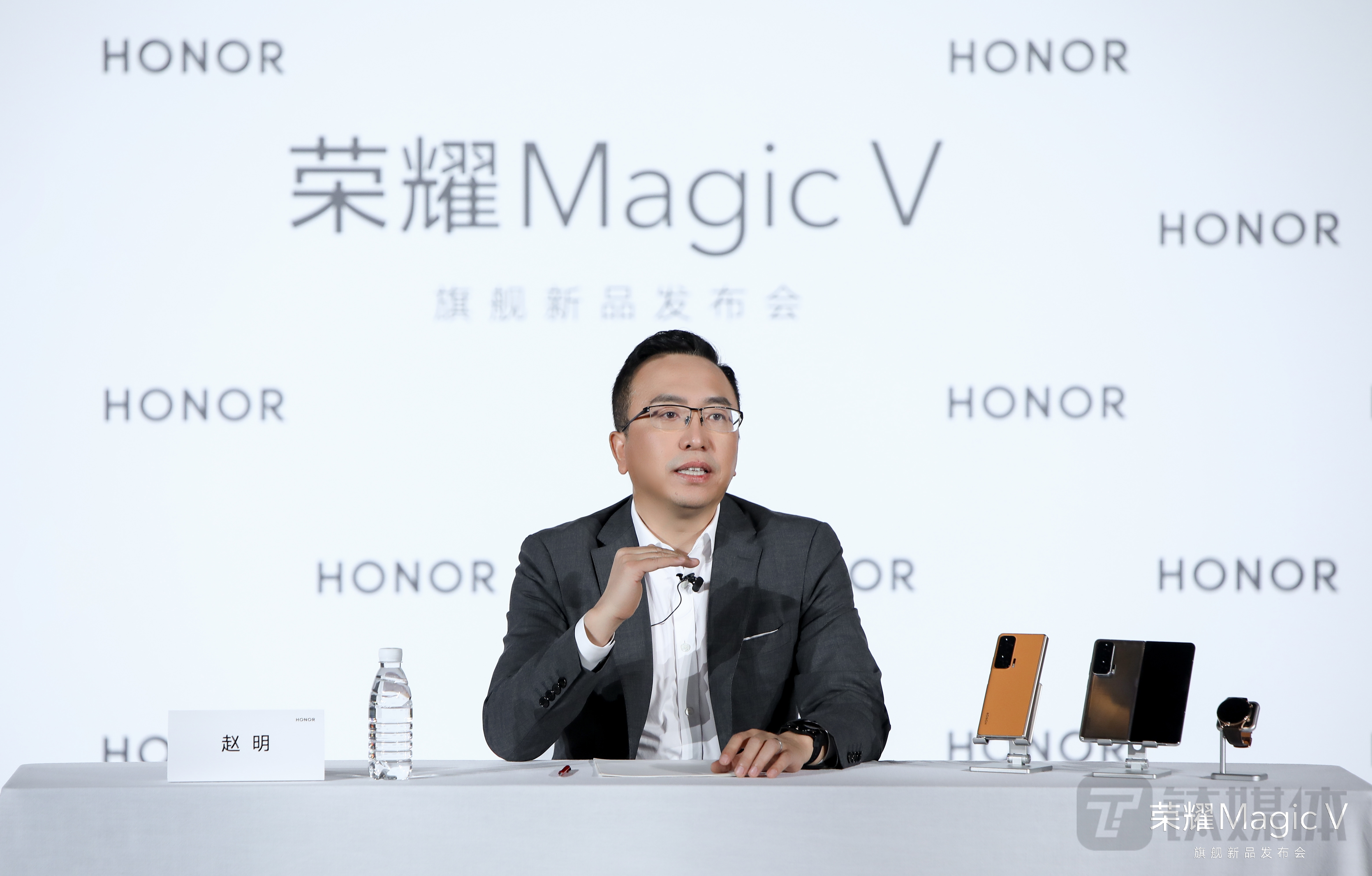 Folding screen mobile phone to do the main standard

The other part is "feel" : "Look cool, the user's product is different, functional experience is secondary, but the phone out there, may be different from others, this is also a need."

The glory Magic V's Slogan is "truly make the folding screen into the era of the main machine", obviously to meet the functional needs of most people first.

According to Honor, 50 percent of foldable phones use the outside screen for everyday applications. Therefore, to achieve the standard of the main phone, the foldable mobile phone should have both the golden ratio and the size of the internal and external screen hardware, and do a good job of operating system adaptation for the coordination between the internal and external screens. 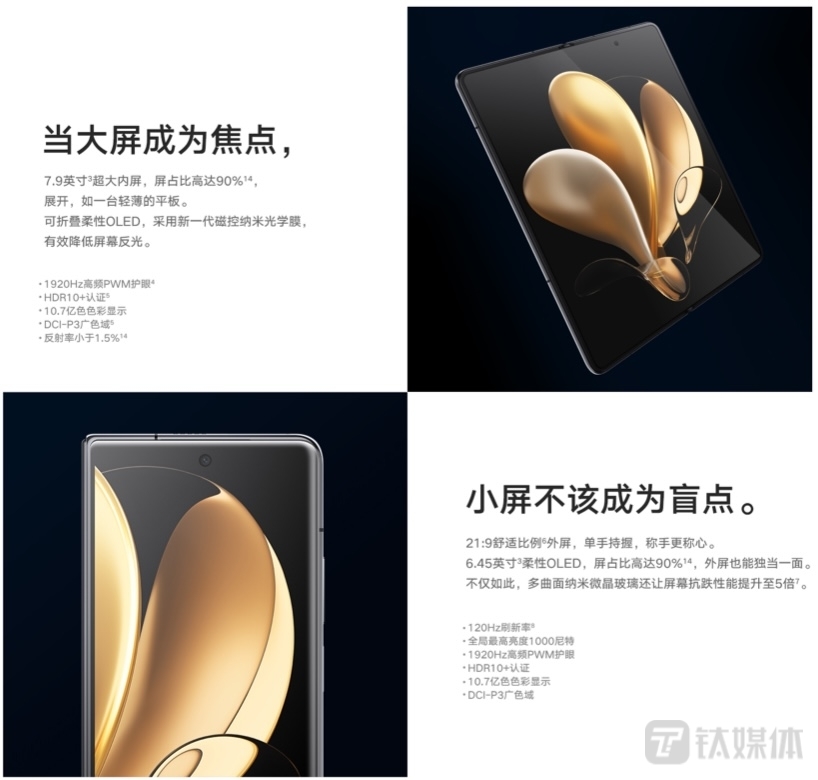 "When the big screen becomes the focus, the small screen should not become a blind spot" reflects the glorious design idea

"Whether it comes together to make a standard straight-panel phone to use, or it spreads out to use as a large-screen phone, it has to best and optimally match the needs of consumers. Is to let consumers buy without regret, buy a value, can really be the main phone, otherwise it may be a straight phone and a foldable phone, "Zhao Ming told ti media App.

For foldable phones to become the mainstay of the market, a competitive price is an important condition.

Prior to the official announcement of the price, expectations for the Honor Magic V were generally around 11,000 to 12,000 yuan.

In such a market environment, glory finally chose to start the sale price at 9999 yuan, product competitiveness. After all, at present, only if the price is set below ten thousand yuan, can it become a popular model, and Glory Magic V is the most foldable mobile phone with the highest configuration at present, one street ahead of Huawei Mate X2.

High-end foldable phones are not a slogan 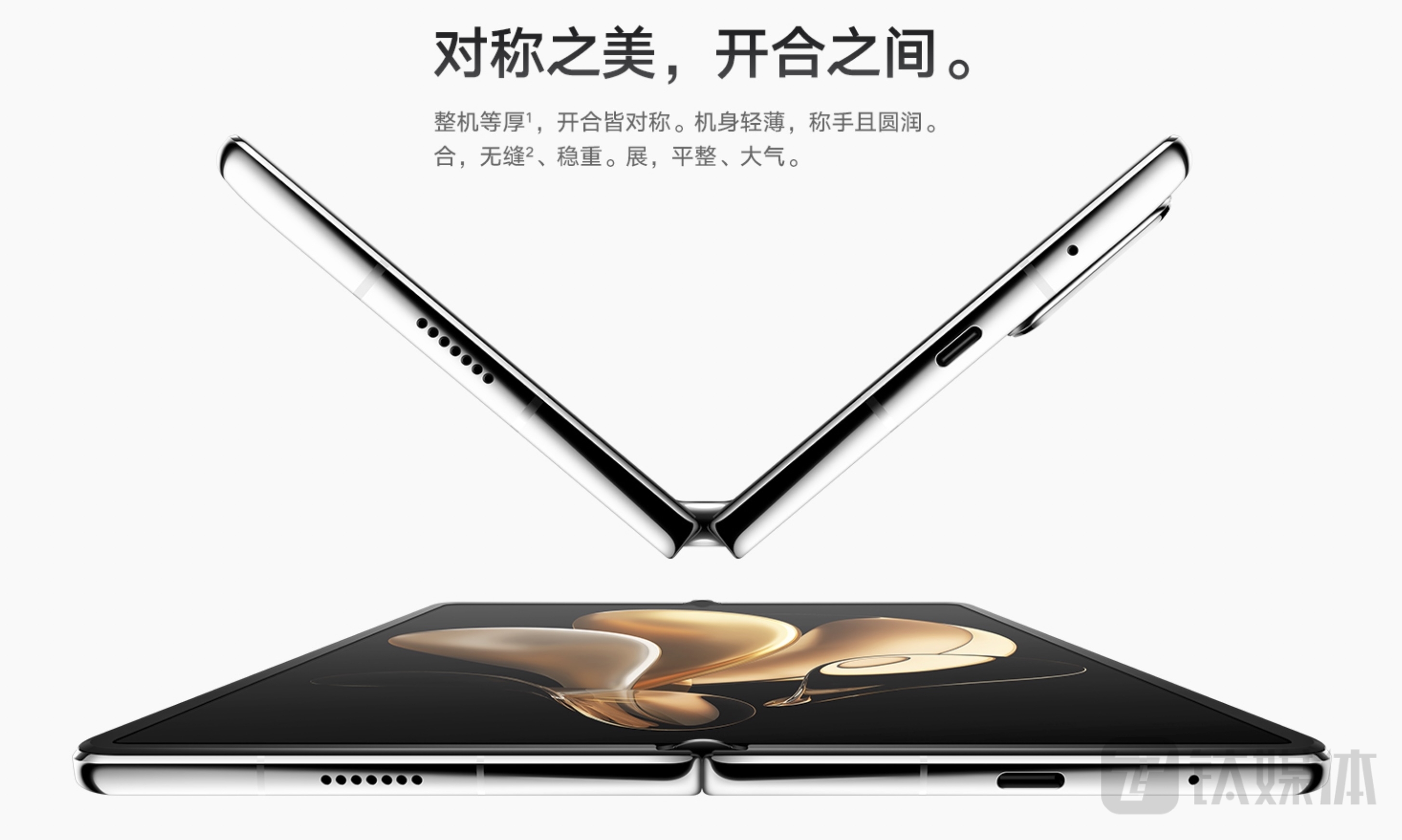 The development of Honor's foldable phone started in early 2021, when honor became independent from Huawei and supply issues were not fully resolved.

In fact, since becoming independent from Huawei, Honor has encountered many difficulties. According to IDC data, at the beginning of 2021, honor's market share was only 3% at the most difficult time, but through unremitting efforts, it finally pulled back to the peak of 16.2% in September 2021, and returned to the ranks of the TOP5 mobile phone manufacturers in China.

When asked about how to enter the high-end market, Zhao Ming said the high-end of mobile phones is not a slogan, but a systematic strength and ability. Under the big strategy, it is necessary to decompose the strategy into executable, practical and quantifiable steps and actions one by one.

When asked about the folding screens crease processing, as well as the camera did not use higher configuration, zao Ming, said the design of the product and price has nothing to do, while considering the crease, folding screen mobile phone drop also is to consider problem, and the image more is to consider the balance of the whole system, otherwise it is difficult to put the mobile phone of unilateral do 6.7 mm thickness.

"In fact, to make an excellent product and flagship, the most important thing is to strengthen where consumers need it most. But if a specification affects the whole systematic and systematic design, this place is the time to make the best choice." "Zhao added.

Zhao Ming also has a clear answer when asked whether the high-end will enter the price war just like the middle and low end.

Ti Media App believes that Glory Magic V is very clear in product ideas, including the combination of software and hardware, and the coordination of internal and external screens. The product has a high degree of completion, and the price is also in a "sweet spot". At the beginning of 2022, releasing such a flagship product at the dawn of the foldable phone will undoubtedly set a new benchmark for high-end products in the foldable phone market.(Author/Wu Honglei)

Related news
Dialogue Glory CEO Zhao Ming: Folding Screen will be the opportunity of domestic mobile phone corner overtaking apple
Glory CEO Zhao Ming: folding screen gives us a chance to overtake Apple in a curve
Take stock of the mobile phone that Honor CEO Zhao Ming fell at the press conference: not more than 5
Hot news this week
Zhao Lijian responded to the British "blocking" Huawei: generalizing the concept of national security harms others and harms themselves
Zhao lijian said the UK's decision to block Huawei under PRESSURE from the US was damaging others and not benefiting itself
Tencent web drama "Beginning" Douban opening score 8.2: the male protagonist's mobile phone has become a highlight!
Samsung's new notebook patent publication: the keyboard is divided into two-quarters after two folds.
AsiaInfo Technology Announces Acquisition of iResearch Consulting to continue to increase digital operations and digital and intelligent transformation
Canon China plans to close some production lines in Zhuhai in response to the zhuhai company's suspension of production
Breakthrough: Chinese scientists have discovered and confirmed the boson exotic metal for the first time
Volkswagen's sales in China plummeted, a record low in 8 years! The CEO revealed the reason for the helplessness
Only 2 decisive headphones Class A Certification of the Ministry of Industry and Information Technology? Perhaps it is misunderstanding
1KW electric energy production 3KW heat Tesla hot pump low temperature hidden dangers were investigated
The most popular news this week
China's groundwater resources reserves are identified for the first time: the southern freshwater reserves account for only 5% of the country's total
Microsoft Gaming Executive: Had a friendly call with Sony management
The United States seeks to contain scientific giants Google 2021 year tour spending increased by 13 million yuan
QQ Music ranked third among the world's most popular music platforms
IPHONE open side load? The US Senate Group has approved the bill to vote
钛媒体科股早知道：价格创十年新高，需求占比或提升5倍以上，特斯拉全球出击疯狂抢占该资源；国家卫健委研究出台更多积极生育支持措施
Take stock of Microsoft's top ten acquisitions: 3 of the more than 10 billion US dollars Nokia is not in the top 5
Deposit time coin pension, what is the upcoming "time bank" in Beijing?
Performance losses exceed 400 million, had been saved by Plum Qi "women's shoes first shares", give up selling shoes
Dong Xiaodian announced the shuttlecock, social e-commerce style encountered life and death