On January 13, a notice bearing the official seal of Canon Zhuhai Co., Ltd. was circulated on the Internet, saying that IT had decided to "terminate the company's production". According to China Business News, Zhuhai High-tech Zone confirmed to several media thatCanon Zhuhai, which has been in Zhuhai for 32 years, has stopped production, and the company is now discussing the disposal plan with its employees.

In response, Canon China said it plans to close part of its production line in Zhuhai, which produces digital cameras, according to Jiemian News.

Canon Zhuhai Co., Ltd. was established in 1990 and has been operating for 32 years thanks to the support of the local government and the long-term hard work and positive contributions of all its employees, the statement said.But the sharp contraction camera markets around the world in recent years, plus COVID - 19 viruses wreak havoc, long-term company faces unprecedented difficulties, although the company and all employees work together to still failed to reverse, headquarters have to adjust the group's overall business architecture, after careful study, to make tough decisions: the termination of the company production.

IT Home learned that Canon zhuhai factory can produce lenses and cameras in the early years, followed by printers, fax machines, scanners, CIS contact image sensors and other products. In recent years, the main products of the company include: lens, digital camera, digital camera and so on. 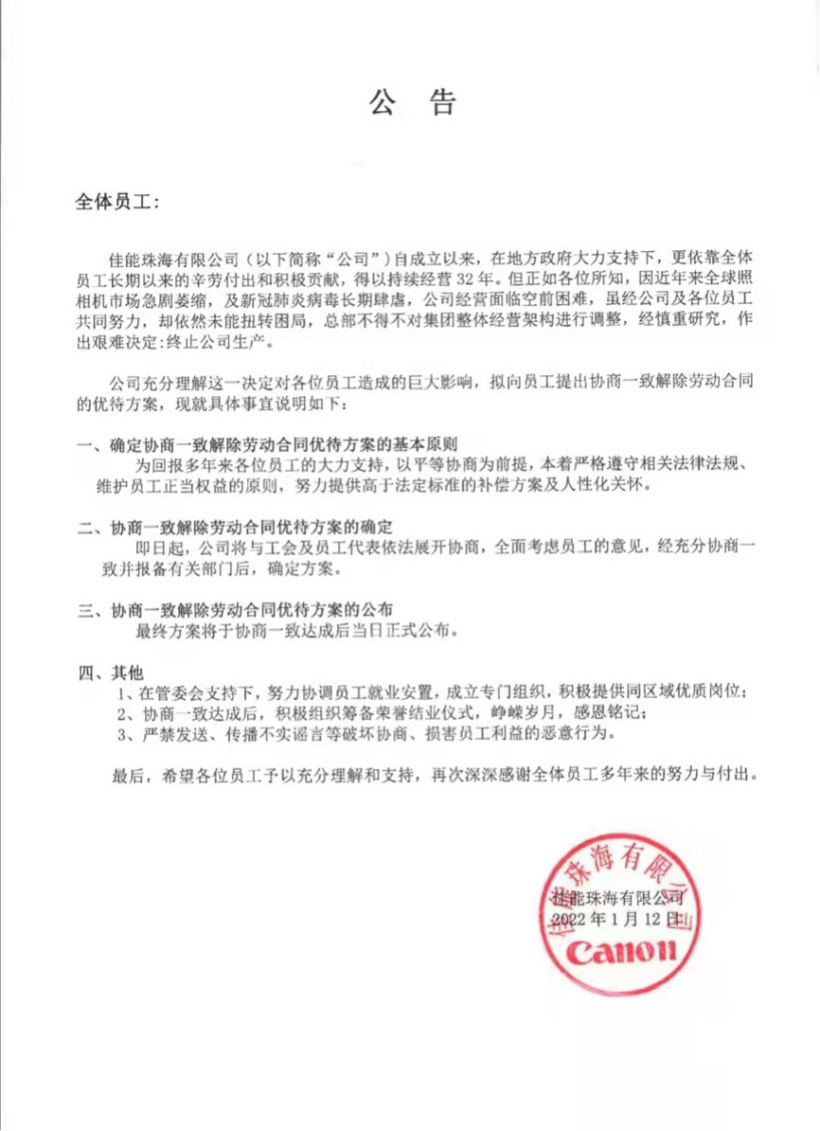 Related news
Musk came to China to dig a tunnel? Plan to launch the Boring Company China project
Tesla will build 12 seat tunnel electric bus for boring company
Semicon China: Huawei and Exxon bring semiconductor intelligent quality inspection and measurement solutions
Glory high-tech products help team China's national team set out to show China's business card to the world
Apple Doubles Clean Energy Suppliers in China
Meta Company slams Facebook to change the name in the open letter
Popular Hot Pot Restaurant Brand Haidilao to Shut Down 300 Restaurants in China
Canon China plans to close some production lines in Zhuhai in response to the zhuhai company's suspension of production
Chairman of Canon China: Expected to close the Zhuhai plant at the end of June Employees are happy to sign the agreement
Hot news this week
The developer of the dating app Tinder has reached an agreement with Google over billing rules for its app store
Red Elf Lightning erupts in the Himalayas Spectacular Spectacle: Experts Reveal What Exactly Is This?
The founder of the Internet Quick Hand Su Hua was taken away for investigation, and the fast hand responded: the news was not true
Or for Studio Display Pro, the release of Apple's 27-inch Mini LED-backlit Display has been delayed by October
One picture to understand! Blue Factory has issued 3 new machines in a row: self-developed chip blessing, the narrowest lower border
Tencent established a smart technology company in Chengdu, and its business scope includes Internet data services
Economist credit card monthly bill $11.4! Only paying for a purchase of Tencent Music, the account manager is busy "condolences"
I once touched the ceiling of the mobile phone screen! Well-known brands announced that the new flagship is the first to carry the Snapdragon 8+
Or has it been spread insidiously in Communities in Europe and the United States: Should We Be Worried About Monkeypox? Experts demystify
Huawei and the Chinese Academy of Sciences jointly developed the new 3D DRAM solution is expected to break through the key root technology of storage
The most popular news this week
China's PC and tablet market status quo at a glance Demand shrinks! Huawei, glory is eye-catching
Chinese director short film Cannes won the award: the cost of 5,000 yuan took 10 days to make the work super high reputation
Two new characters! Original Gods version 2.7 pre-download has been enabled
The 780 billion "oil leader" CNOOC rose and fell in the intraday, and the stock price hit a new high since its listing
The largest acquisition case in the history of 400 billion chips Chen Fuyang and Dell only used to meet
Visual China responded to 8 yuan Audi photo questioning: 1500 yuan for sale, the original author only received 2 yuan
Musk: The U.S. recession "is actually a good thing"
Online literature lost 6.2 billion yuan due to piracy last year? 522 online writers signed a petition against piracy
Baidu opened up nearly 15% and Alibaba opened up more than 12% in Hong Kong
Game cards sell crazy and make a lot of money! NV's fiscal first quarter revenue increased 46% year-over-year