According to the Douban plot introduction, the drama is adapted from the novel of the same name by Qijun, which tells the story of game architect Xiao Heyun (played by Bai Jingting) and college student Li Shiqing (played by Zhao Jinmai) who "came back from the dead" after encountering a bus explosion, constantly experiencing the time cycle during the time period of the bus accident, from getting off the bus to saving themselves to breaking the barrier and fighting side by side, trying to stop the explosion and find the truth.

According to the data on January 13, the number of single-platform broadcasts of the drama exceeded 100 million in the three days of broadcasting, and it was full of popularity.

With the increase in the number of netizens watching, the details of the play have also been paid more and more attention.One of the highlights has been discovered by digital enthusiasts, that is, the mobile phones of male and female protagonists in their hands are domestic brands realme.

It is easy to recognize according to the video screenshot,The male protagonist is holding realme's top flagship realme  GT last year, which is also the first realme  mobile phone endorsed by Yang Mi.

It is worth mentioning that the color matching of this mobile phone in the play is also very eye-catching, which is realme GT Ares Special Edition - Dawn color matching, its design is inspired by the classic GT model, which adopts a very personal black and yellow contrast, and the camera matrix extends downward infinitely, paying tribute to the classic bionic design of the tear-stained headlights. 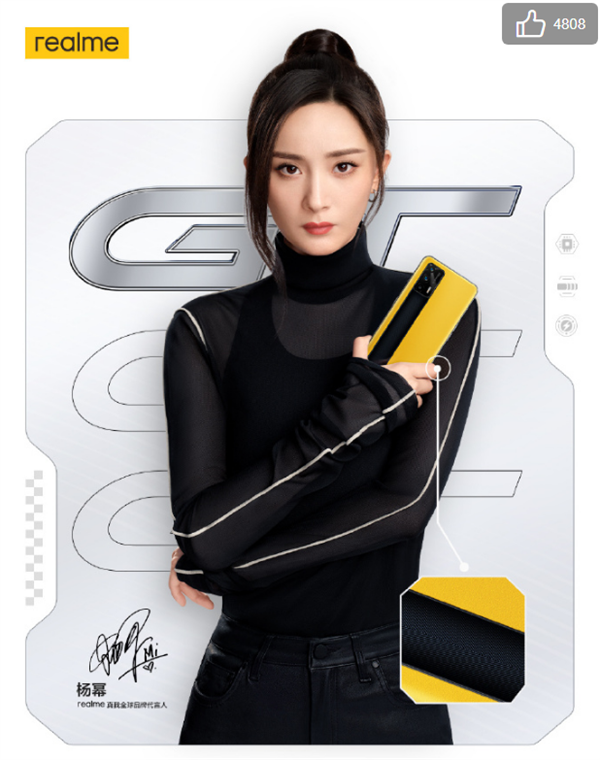 In addition to the color matching, realme GT Ares Special Edition - Shuguang Kai is also innovatively equipped with a plain leather splicing process, so as to ensure the delicate texture and soft feel of the plain leather, so that the double material is tightly spliced, but also greatly improved the texture of the plain leather and comfortable feel.

As for the configuration,Realme GT is equipped with snapdragon 888 flagship processor, has a maximum of 12GB LPDDR5 memory specifications, supports 65W fast charging, and the front screen is a 6.8-inch 120Hz AMOLED digging screen.