Express trains were looted: boxes were strewn along the tracks

A video showing a large number of delivery boxes scattered on both sides of a railway in the US has caught the attention of social media users because they were stolen from the train and then discarded, foreign media reported.

As you can see from the video,A large number of broken boxes were scattered on both sides of the railway, and some people even turned them over at the scene.

The boxes were stolen from a UPS train in Los Angeles, California, where the video was taken.

The union Pacific railroad's railcars, with their shaky locks, attracted thieves to steal deliveries.And those deliveries come from all over the country, including packages from Amazon, Best Buy and others.

Thieves tend to pick and choose what they find useful and throw away the rest. One of the most dropped deliveries is the Novel Coronavirus home test kit.

Union Pacific says there has been no spike in such thefts. Will work closely with local law enforcement to protect customers' packages from loss. 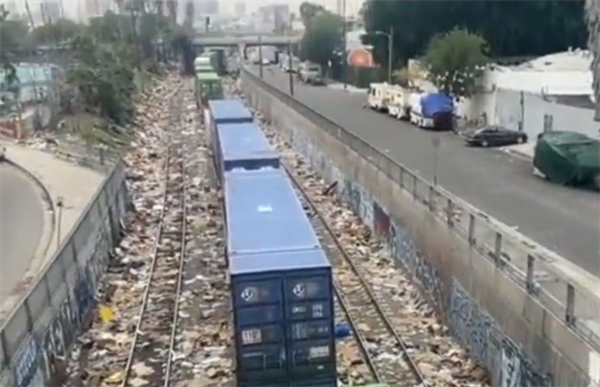 Related news
New York MTA: Apple pay express transit payment service expanded to Pennsylvania Station
Similar to the bank counter Apple deploys Express system for offline iPhone 12 users (Figure)
Linux 5.11 starts early preparation around PCI Express 6.0
Hot news this week
Zhao Lijian responded to the British "blocking" Huawei: generalizing the concept of national security harms others and harms themselves
Zhao lijian said the UK's decision to block Huawei under PRESSURE from the US was damaging others and not benefiting itself
Half a billion! Pay treasure collect five blessing to come: exceed 50 thousand people collect qi have you
Behind Microsoft's acquisition of Blizzard: Intended to build a super game carrier, SONY is the most hurt
Behind the exposed layoffs, China has praised the loss growth, and the stock price has fallen 67% in three months.
Mediatek's 40% share topped the mobile SoC market, leading for six consecutive quarters, followed by Qualcomm and Apple
The largest transaction in Microsoft's history! Hao Zhi 436.1 billion cash acquisition moving blizzard
Microsoft's $68.7 billion acquisition of Activision Blizzard became the largest acquisition in the company's history
Huawei applied for the Tianchi trademark again, and the international classification is scientific instruments and website services
Cait: it is not recommended to take quarantine measures directly for travel card users with asterisks
The most popular news this week
7 years! The classic control panel doesn't die: Windows 11 takes another step back
The most comprehensive summary! Apple will release the most equipment in history this year.
Microsoft forced upgrade Windows 10 20H2: It also uses machine learning
VR/AR global invention patent ranking TOP100: Samsung, Tencent, baidu top 3
Good start! China's software business revenue increased by 17.7% to 9,499.4 billion yuan in 2021
Microsoft Surface Pro 8 pushes the January driver update
How hard does the physics teacher work in class? Dismantle your own iPhone and induction cooker for students to see
Huawei applied for the registration of petal series trademarks
Tencent, China Merchants Port established The Port teng Internet technology company, registered capital of 50 million
Xiaomi applying for a Mibao trademark, international classification is a financial property management