First of all, it's worth noting that the test was running under the 494.29/22.1.1 driver, and while the update notes for some drivers don't include God of War 4, features like DLSS did work.Currently, the Windows version does not support exclusive full screen, so it will only be tested in an bezel-less window。 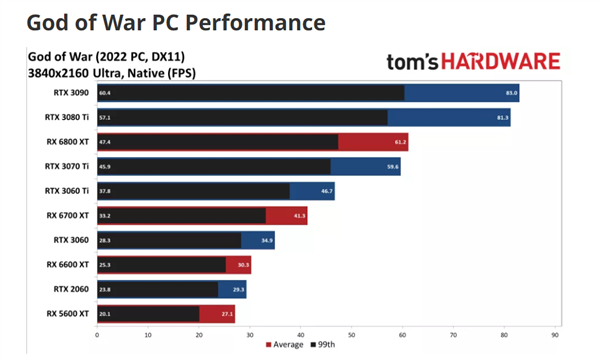 The first is ultra high resolution +4K performance.As you can see, the RTX 3070Ti is essential for a smooth experience of 60 frames in native 4K resolution. On the A-card side, even the 6700 XT struggled, with A 99% frame rate of 41.3 FPS. Testers say this could be due to poor optimization, or the game using a DX11 rendering engine. 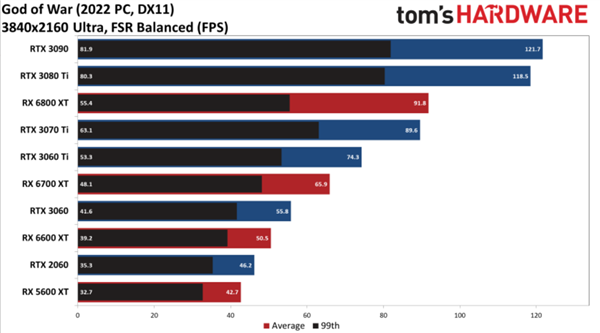 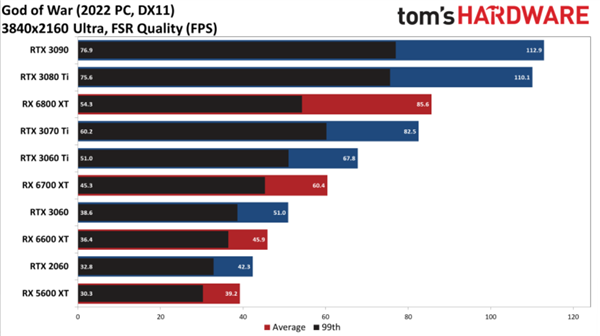 In terms of visual image quality, the ultra-high and high quality FSR models had little noticeable loss, the testers said.On the other hand, the quality of the balance mode and the following image drops significantly. The 6700 XT can still meet the lower limit of 60 frames of fluency in high-resolution FSR mode。 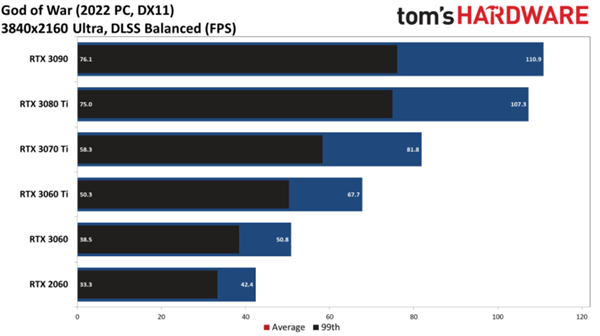 Open DLSS,In quality mode, the RTX 3060 Ti's frame rate performance is close to that of the FSR。 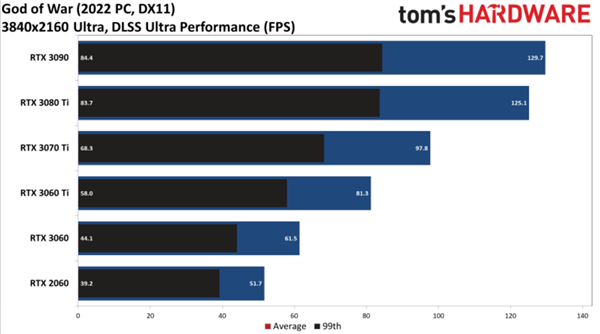 If you want to play with the RTX 3060, you may have to turn on DLSS in super performance mode to meet the requirements of 60 frames smooth. However, there is also a serious loss of quality in this mode. 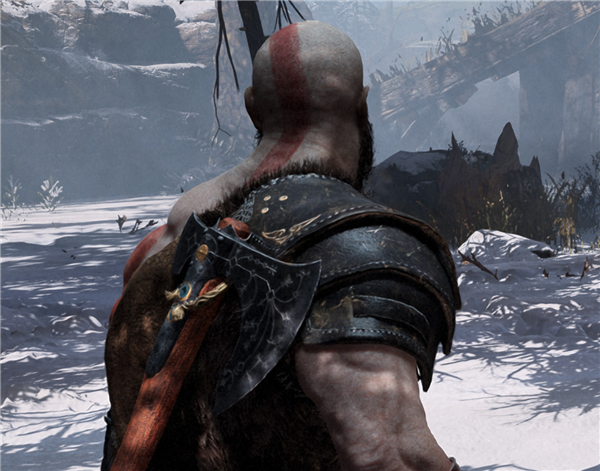 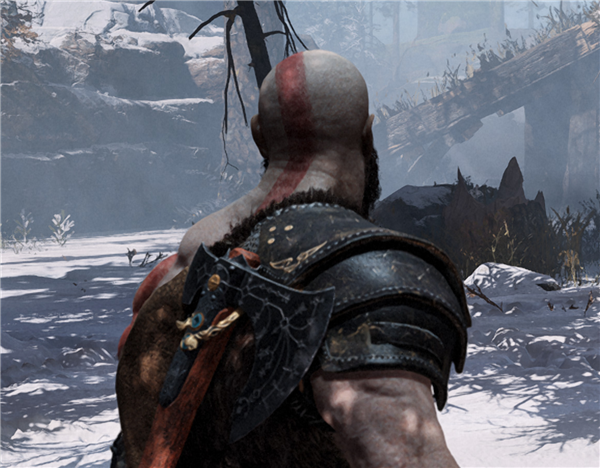 Furthermore, according to the authors, most DLSS and FSR modes look almost identical in 4K, and the differences are almost impossible to spot without a closer look. The exception is DLSS's super performance mode, where the picture changes and the vision is lost. In motion, the picture has little effect, with only a little flash and blemishes on the grass.

Of course, this test only works in 4K. The authors also say that even the 5600XT can reach 64 FPS if the graphics Settings are lowered and the FSR quality mode is used.At 1080P+ default, the game could run smoothly on 5 years of graphics cards。 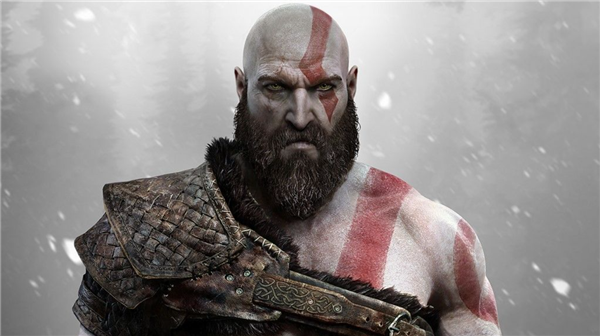 Related news
4K 144hz with dual SLI? ASUS DSC competitive display saves you 2080ti
New version of energy ring released: the holes dug in the screens of Xiaomi 10 and glory 20 can also display the ring electricity
Microsoft Flight Simulation 4 K Test :2080 Ti can only run 30-40 frames
Apple Doubles Clean Energy Suppliers in China
Energy efficiency test of God of War iv PC: minimum 3070Ti for lossless 4K games
Nvidia releases 511.65 driver: supports RTX 3080 Ti / 3070 Ti notebook graphics
110W RTX 3080 Ti Measured: Performance is comparable to 150W 3070 Ti The average price is 4000 expensive
Hot news this week
Young people can't change their mobile phones one brother pressure in the channel inventory up to 50 million
Chinese mysterious female rich 560 million buy European luxury homes: the full amount of cash is paid at a time
Criminal gang candid courier list takes the money 8 people to be arrested
Do you make feed after Yi Lord? Zhenghong Technology M & A has mystery
Internal personnel have caused players to contradict? Netease "Yin Yang Shi": Impossible!
The first pop -up shop in the United States opened, Bubble Mart opened the North American expansion plan
The goose factory is finally making a move on the metasverse?
Big news! The police report henan village banks can not withdraw cash case, has captured a number of suspects
Tesla has lost nearly $600 million after the richest Chinese lost 89% of his net worth in the bitcoin crash
With this charging treasure that can legal "stealing electricity", I don’t worry about the mobile phone out of power
The most popular news this week
Huawei's mid-range phone Nova Y90 has been released overseas and will soon be available in China
The new MacBook Pro 13 -inch is now available at the Apple Store retail store
The largest professional wholesale market was granted an Internet payment license, and 449 million yuan became the actual controller of Fastlink
Huawei's Nova 10 Pro appears on Geekbench powered by Qualcomm Snapdragon 778G 4G
Apple updates the subscription management interface on the iPhone: the larger distance display is more detailed
Apple says its employees have reproductive health benefits but has been asked by lawmakers to investigate
The iOS 16 upgrade is no longer supported on the iPhone 6s
Apple M2 version of MacBook AIR July Sale: Magsafe Return
Activision Blizzard CEO Bobby Kotick kept his seat on the board
Apple's best-selling product is getting an update! New AirPods Pro Exposure: Heart rate monitoring, USB-C support