In the third quarter of 2021, Mediatek continued to lead the global smartphone SoC market with a market share of 40%, followed by Qualcomm and Apple, according to a Counterpoint report released today. The market share of Zhensui broke through double digits, while Samsung lagged behind, shrinking to 5%. Huawei's share fell to 2% due to the US ban. 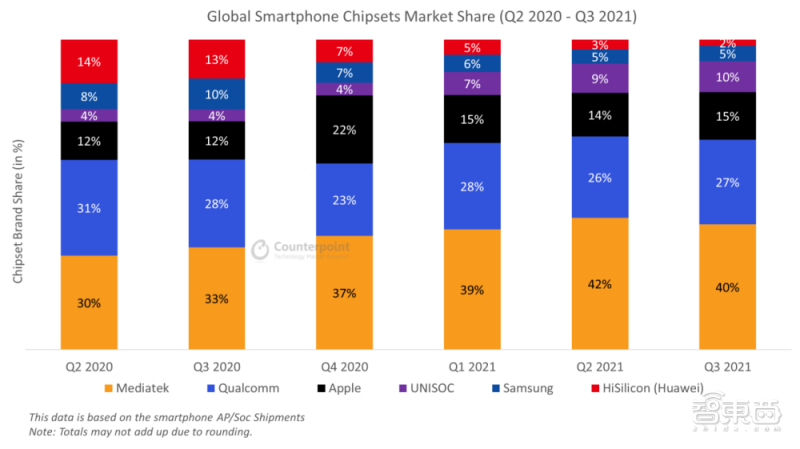 Mediatek maintained the no. 1 position for six consecutive quarters with mid-to-low-end 5G products, and LTE soCs further helped it consolidate its position in the market. Mediatek's market share surged to 40% in the third quarter of 2021, thanks to competitive 5G soCs and high demand for 4G soCs.

By the third quarter of 2021, Zhanrui's shipments achieved three consecutive quarters of growth. Zhanrui expanded its customer base and partnered with a number of major Oems, including Honor, RealMe, MOTOROLA, ZTE and Transone, to increase its market share to double digits at 10%.

Samsung's market share fell to 5% in the third quarter of 2021. According to Counterpoint, this is due to the insourcing and outsourcing of products to Chinese ODMs after Samsung adjusted its product portfolio. As a result, Samsung's market share of mid-range 4G, 5G models and flagship models manufactured by ODM has consistently been lower than mediatek and Qualcomm.

Huawei Haisi is still affected by the US trade ban and cannot produce Kirin chips. The company's current inventory of Kirin chips is nearing exhaustion. So Huawei is using the latest range of Qualcomm chips, but they are limited to 4G capabilities.

Conclusion: Smartphone chipset shipments are growing year by year, with Mediatek and Qualcomm taking the lead

The consumer market's crazy pursuit of smart phones has spawned a large demand for smart phone chips, and the shipments of smart phone chipsets are increasing year by year. Mediatek is positioned at the middle and low end of the market, and its market share is growing steadily. Qualcomm followed, and the Snapdragon chip gradually iterated to meet the needs of the public. Zhanrui also achieved market share growth by expanding customer groups.

Related news
MediaTek 5g chip, Tianji 1000, a booming partner, has been asking for solutions
In the third quarter of last year, the proportion of mobile phones shipped by Huawei and Samsung with self-developed SOC increased to 75%
Over 100 million shipping volume! The first time MediaTek ascends to the top of smart phone SOC
MediaTek becomes the largest smartphone SOC supplier in China: Surpassing Qualcomm
Mediatek's 40% share topped the mobile SoC market, leading for six consecutive quarters, followed by Qualcomm and Apple
Mediatek tops the list of mobile SOC sales in China in 2021
Price wars start ahead of schedule? MediaTek, Qualcomm Q2 or downgraded 5G SoC quotations
The latest smartphone SoC list is released: MediaTek is the king, and HiSilicon is fourth
2022 Q1 China Smart Mobile SOC market share ranking: MediaTek Sitting first
Hot news this week
The developer of the dating app Tinder has reached an agreement with Google over billing rules for its app store
Red Elf Lightning erupts in the Himalayas Spectacular Spectacle: Experts Reveal What Exactly Is This?
The founder of the Internet Quick Hand Su Hua was taken away for investigation, and the fast hand responded: the news was not true
Or for Studio Display Pro, the release of Apple's 27-inch Mini LED-backlit Display has been delayed by October
One picture to understand! Blue Factory has issued 3 new machines in a row: self-developed chip blessing, the narrowest lower border
Huawei and the Chinese Academy of Sciences jointly developed the new 3D DRAM solution is expected to break through the key root technology of storage
Tencent established a smart technology company in Chengdu, and its business scope includes Internet data services
I once touched the ceiling of the mobile phone screen! Well-known brands announced that the new flagship is the first to carry the Snapdragon 8+
Or has it been spread insidiously in Communities in Europe and the United States: Should We Be Worried About Monkeypox? Experts demystify
Economist credit card monthly bill $11.4! Only paying for a purchase of Tencent Music, the account manager is busy "condolences"
The most popular news this week
Pinduoduo Q1 revenue of 23.8 billion increased by 7% Technology and agricultural strategy into a dual engine
Musk: Tesla peripheral products can be purchased with Dogecoin
Luo Dayou Sun Yanzi brushed the scenes behind the screen and Tencent began to grab traffic again
Pinduoduo revenue in the first quarter of 23.8 billion increased by 7% year -on -year
Chinese stocks closed mostly up on Friday, Pinduoduo rose more than 15% Kingsoft Cloud rose more than 7%
Expert: Concerns that emojis cause expression to feel less susceptible may be exaggerated
The Changwu B rocket arrives at the Wenchang launch site and will launch the Wentian Experimental Module of the Chinese space station in July
The DuckDuckGo browser was found to have quietly allowed Microsoft to track it
Pinduoduo released the first quarter report, with a revenue of 23.8 billion yuan, starting the technology flow
Can air disinfection stick kill 99.9%coronary virus? Experts: Several levels of concentration are different