Facebook's parent company, which changed its name to Meta, has shifted its focus to the metasomes and is accelerating the development of technology hardware as well as software ecosystem.

In September 2021, Meta partnered with Ray-Ban to launch Ray-Ban Stories, smart glasses with built-in speakers and microphones that can answer calls and control voice assistants. It also has two 5MP cameras that can take photos and 30-second videos and transfer them to Facebook for viewing or sharing on the phone. 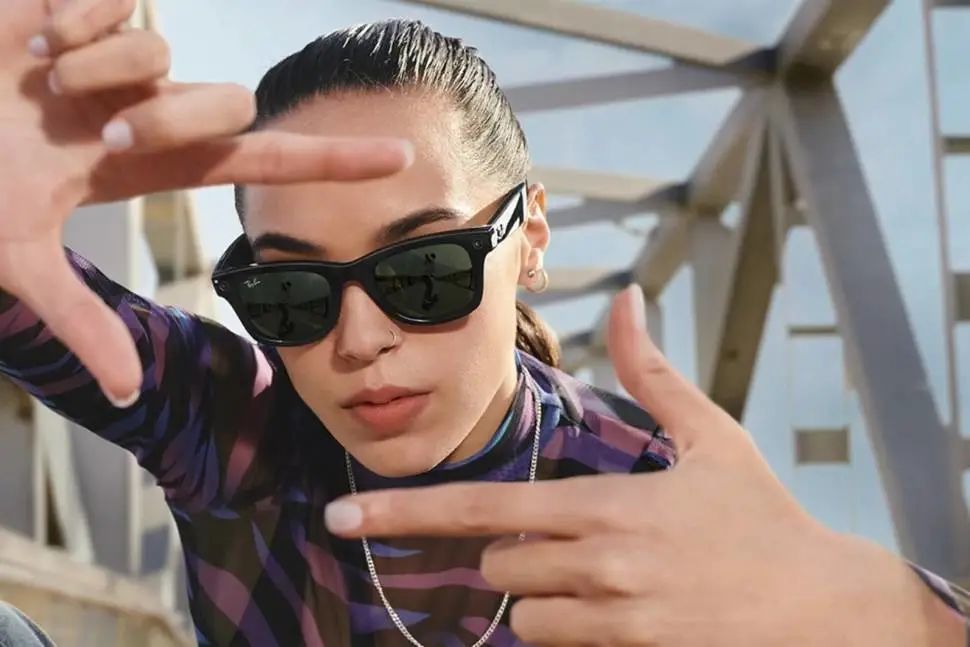 An app developer recently found an image of Meta's new smartwatch in the "Ray-Ban Stories" smart glasses control app, and a patent report submitted by Meta to the World Intellectual Property Organization (WIPO) was made public. The smart device that is supposed to be the Apple Watch's successor has been spotted for the first time. 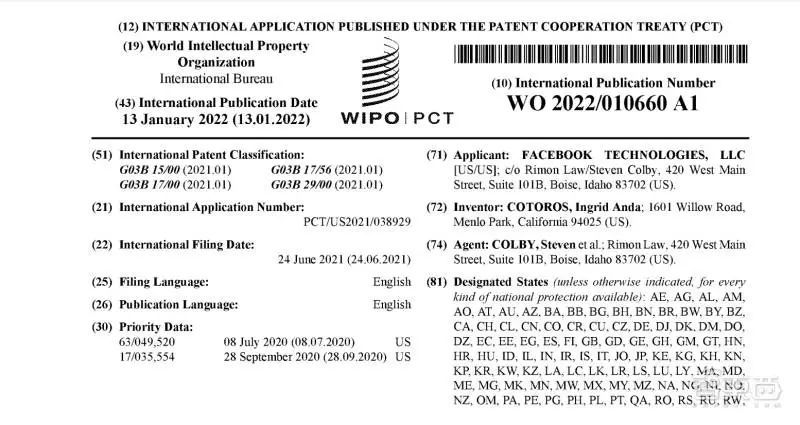 Combined with patent images and in-app exposures, Meta's smartwatch could have two designs: a square, arched face similar to the Apple Watch, and a round face similar to the Samsung Galaxy Watch, both with more than one camera and display. The display is fixed with magnets and can be rotated to take photos or video.

"The invention relates to a portable device consisting of a watch band, a base, a detachable attached display, and a camera integrated into the display," the patent document says.

What makes Meta's smartwatch special is not only the camera on the watch face, but also its detachable bezel. 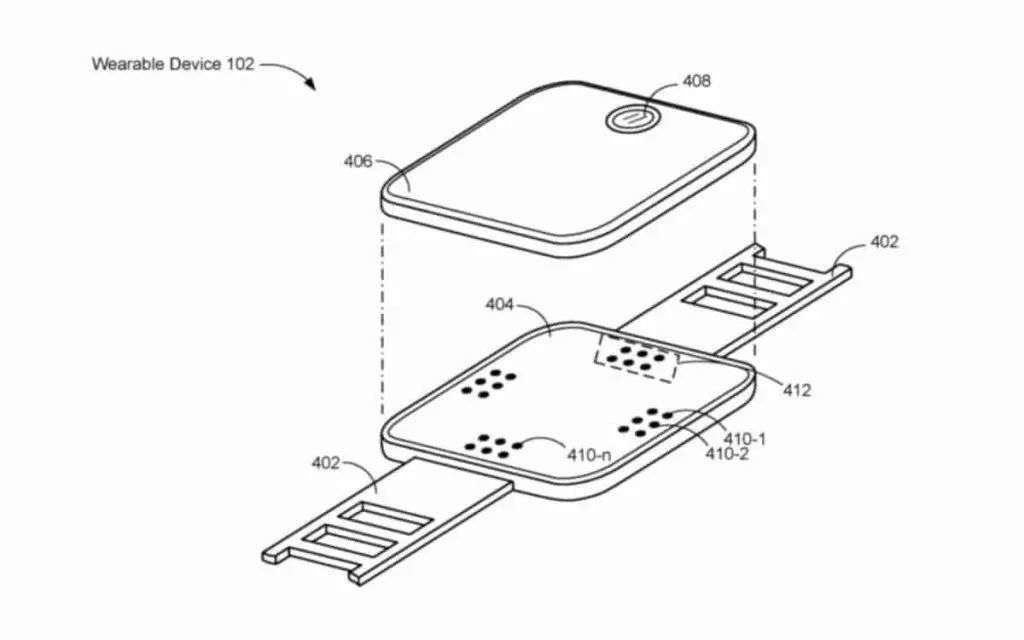 According to THE VERGE, when THE display is removed, Meta's smartwatch displays a 1080P autofocus camera that can be used to take photos and videos and share them between apps like Facebook or Instagram. 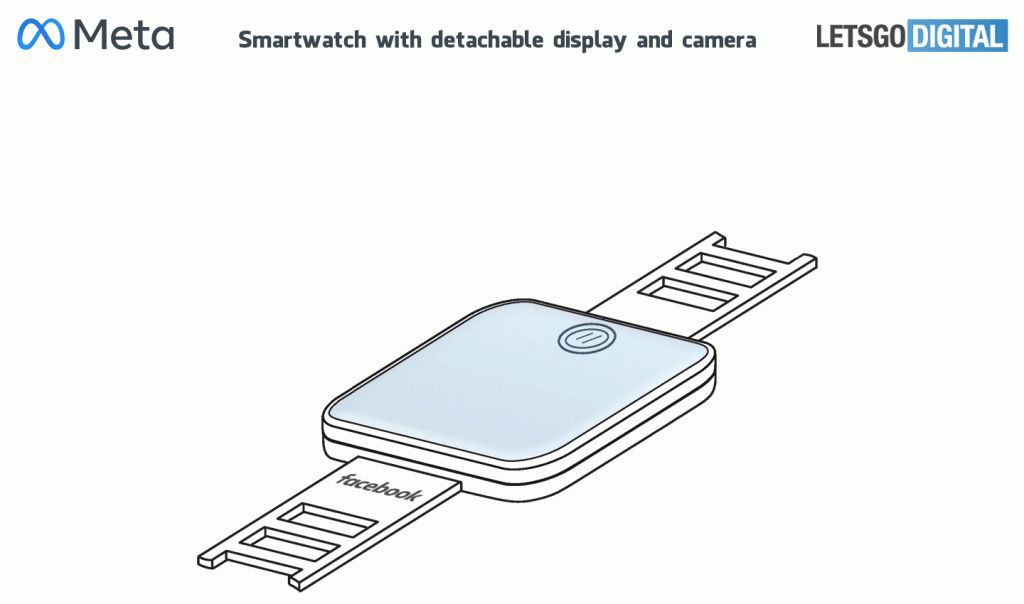 In addition, Meta's smartwatch is expected to focus on messaging and health monitoring, according to The Information. It will feature heart rate and temperature sensors, have Facebook Messenger built in, and may work with companies like Peloton. The smartwatch may also support LTE connectivity, allowing it to work independently without a phone.

In terms of software ecosystem, Meta's upcoming smartwatch will run on a customized Version of Android, but not Wear OS, while the upgraded smartwatch will switch to the operating system developed by Meta itself.

It's worth noting that the patent filing for the Meta smartwatch mentions "connecting wearables to augmented reality headsets, such as the Oculus Rift," meaning that in the future it will most likely be compatible with VR and AR systems as an input device to the company's upcoming AR headsets. 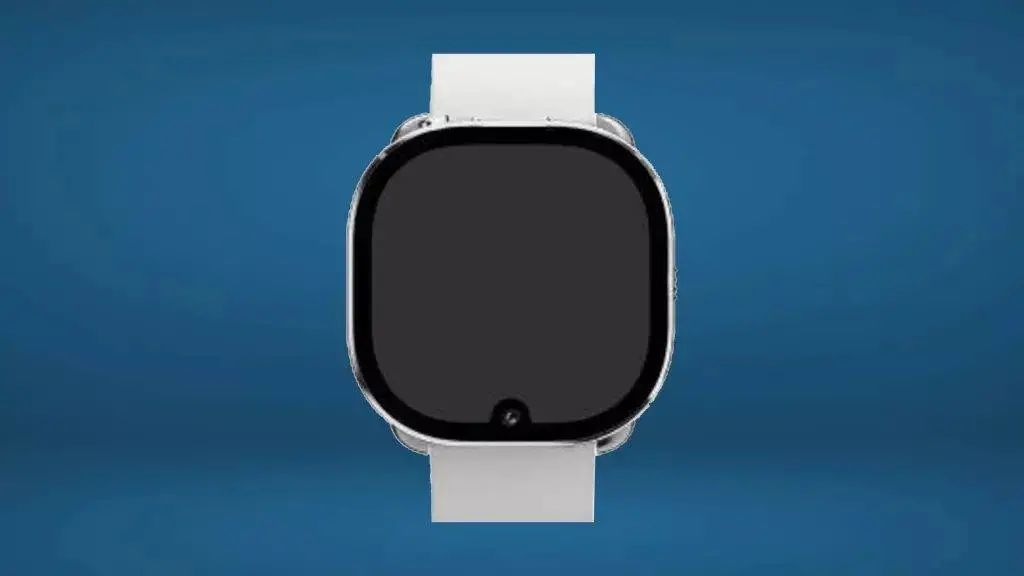 There's no word yet on Meta's smartwatch, nor is there an official name. Since the company changed its name to Meta, many businesses have been renamed, such as Oculus Quest, but if the new smartwatch is called "Meta Watch," There could be a branding dispute with MetaWatch, a smartwatch company founded by former Fossil engineers.

Related news
Apple Watch skyrocketed last quarter accounted for one-third of global shipments
Apple Watch Series 5 leaks: or supports blood pressure measurement
Apple "Apple Watch Pro" brand name LOGO exposure
Apple Watch? Meta's first smartwatch is exposed, photographed and detachable
Meta to stop developing smartwatch: Dual camera conflicts with 'emG' feature
Hot news this week
Female graduate students leave school to give birth to the hot debate is hype? The husband has set up a webcast company
How much is 4G than 5G! Huawei Mate50 network speed detailed measurement 6799 yuan to buy explosion money?
It's hard to find a machine! Huawei Mate50's first sales: oxen can not buy the price of 10,000 yuan to grab the price
Huawei City's proportion is the first! Survey: Northerners love to use folding screens more than southerners
Our global car he is a special car for China! Saic Volkswagen and FAW-Volkswagen are fighting each other
Are they really aliens? The US Navy confirms there are multiple UFO videos: but they cannot be made public
Chongqing Xiaomi Consumer Finance Co LTD has been fined 500,000 yuan for misappropriating consumer loan funds
The second phase of the main structure of Xiaomi intelligent factory is completed to see the delivery at the end of next year
In order to change the iPhone 14: Women's net red sells old phones and comes with a large number of private photos
4 million units are not enough! Huawei Mate 50 seconds sold out of the hack, the maximum price of 10,000 yuan to earn crazy
The most popular news this week
Tesla sales response "disguised price reduction of 8000 yuan" : for the end of the quarter impulse, temporary activities
Apple iPhone 14 standard version is not good for sales, Lixun precision may face the risk of ordering orders
Billions of euros in investment, Intel Italy chip factory will be located in the Veneto region, sources said
China Mobile to develop 5G Tidal Smart Antenna: Where the crowd
Huawei Smart Screen New Products Tomorrow: Sub -looking 75 and 86 sizes of the sub -brand
Apple conscience: AppleCare+User iPhone can repair unlimited times
From January to July this year, my country's industrial software product revenue reached 121.9 billion yuan, an increase of 8.7% year-on-year
China Mobile Development 5G tide smart antenna: signal dynamics follow the crowd
Foxconn dismantles production line! The iPhone 14 could be the worst-selling model in history: Apple's strategy to clear inventory has failed
The game does not produce plug -in first: "Call of Duty 19" B test has perspective+self -aiming plug -in