Yesterday evening, global players witnessed history, Microsoft official website issued a statement,Announced that it will acquire Activision Blizzard for $95.00 per share in an all-cash transaction valued at $68.7 billion (approximately RMB436.4 billion).After the transaction is completed, Microsoft will become the third largest global game company by revenue, after Tencent and Sony.

Microsoft said in a statement that the deal, which is expected to close in fiscal year 2023, has been approved by the boards of microsoft and Activision Blizzard.

After the official announcement, today, the topic #Microsoft announced the acquisition of Activision Blizzard # rushed to Weibo hot search, some netizens left a message in the comment area sighing:"The most terrifying thing is the all-cash transaction" "400 billion, say cash is paid in cash" "Three or four hundred billion, say acquisition is acquisition ... Microsoft is indeed a big guy...".

In addition, the Xbox official micro-post said, "Today is a very historic moment. We are excited to share with you that the world-famous Activision Blizzard is about to join the Xbox family! ” 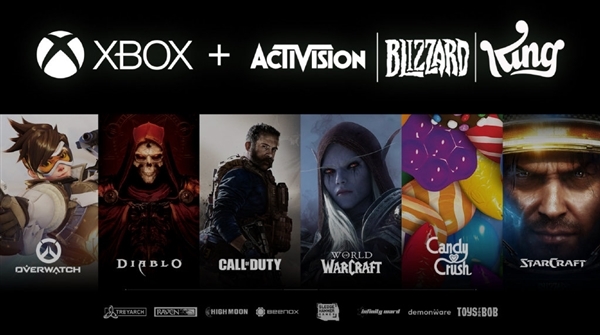 After Microsoft acquired Activision Blizzard,You will directly get a large number of the world's top game IPs including "World of Warcraft", "Warcraft", "StarCraft", "Call of Duty", "Diablo", "Overwatch", "Hearthstone", "Candy Crush Saga" and so on.

For players, there seems to be another reason to buy an Xbox.

According to the official statement, Bobby Kotick will continue to serve as CEO of Activision Blizzard, and after the completion of the transaction, the Activision Blizzard business will report to Microsoft Game CEO Phil Spencer.

Related news
Microsoft's $68.7 billion acquisition of Activision Blizzard became the largest acquisition in the company's history
What kind of idea and layout does Microsoft have behind the acquisition of Blizzard?
Microsoft announces acquisition of Activision Blizzard on hot search! Netizens sighed: 400 billion cash transactions
Phil Spencer, CEO of Microsoft's Gaming Business: Welcome to Activision Blizzard to the Microsoft gaming family
Microsoft's $68.7 billion acquisition of Blizzard: a $3 billion breakup fee will be charged if it fails
Microsoft announced a $68.7 billion cash deal to buy Activision Blizzard, the world's third-largest gaming company
Microsoft's $68.7 billion acquisition of Activision Blizzard The U.S. government will conduct an antitrust investigation
Activision Blizzard Fourth Quarter Revenue $2.163 Billion Net Profit Up 11% YoY
Activision Blizzard's stock price innovative low investors are worried about Microsoft's acquisition of transactions and drift water
Hot news this week
The developer of the dating app Tinder has reached an agreement with Google over billing rules for its app store
Red Elf Lightning erupts in the Himalayas Spectacular Spectacle: Experts Reveal What Exactly Is This?
The founder of the Internet Quick Hand Su Hua was taken away for investigation, and the fast hand responded: the news was not true
Or for Studio Display Pro, the release of Apple's 27-inch Mini LED-backlit Display has been delayed by October
One picture to understand! Blue Factory has issued 3 new machines in a row: self-developed chip blessing, the narrowest lower border
Huawei and the Chinese Academy of Sciences jointly developed the new 3D DRAM solution is expected to break through the key root technology of storage
Tencent established a smart technology company in Chengdu, and its business scope includes Internet data services
I once touched the ceiling of the mobile phone screen! Well-known brands announced that the new flagship is the first to carry the Snapdragon 8+
Or has it been spread insidiously in Communities in Europe and the United States: Should We Be Worried About Monkeypox? Experts demystify
Economist credit card monthly bill $11.4! Only paying for a purchase of Tencent Music, the account manager is busy "condolences"
The most popular news this week
Pinduoduo Q1 revenue of 23.8 billion increased by 7% Technology and agricultural strategy into a dual engine
Musk: Tesla peripheral products can be purchased with Dogecoin
Luo Dayou Sun Yanzi brushed the scenes behind the screen and Tencent began to grab traffic again
Pinduoduo revenue in the first quarter of 23.8 billion increased by 7% year -on -year
Chinese stocks closed mostly up on Friday, Pinduoduo rose more than 15% Kingsoft Cloud rose more than 7%
Expert: Concerns that emojis cause expression to feel less susceptible may be exaggerated
The Changwu B rocket arrives at the Wenchang launch site and will launch the Wentian Experimental Module of the Chinese space station in July
The DuckDuckGo browser was found to have quietly allowed Microsoft to track it
Pinduoduo released the first quarter report, with a revenue of 23.8 billion yuan, starting the technology flow
Can air disinfection stick kill 99.9%coronary virus? Experts: Several levels of concentration are different