Behind Microsoft's acquisition of Blizzard: Intended to build a super game carrier, SONY is the most hurt 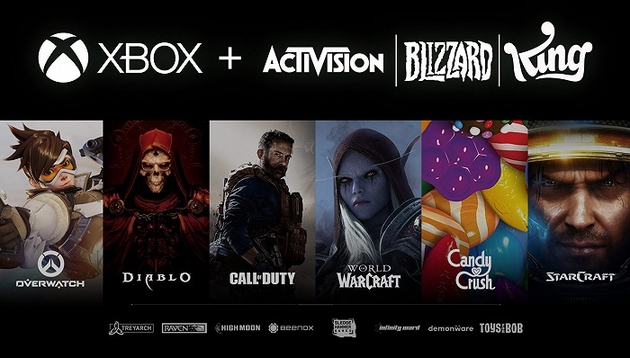 Original headline: Behind Microsoft's $68.7 billion Acquisition of Activision Blizzard: A move to build a gaming superpower, SONY hurt the most

When the market was still reeling from Take-Two's $12.7 billion acquisition of Social gaming company Zynga, the biggest deal in gaming history, it took just a week to break that record.

Microsoft will buy Activision Blizzard for $68.7 billion, making it the world's third-largest gaming company after Tencent and SONY. The deal will also bring into its fold well-known game brands including "Call of Duty", "World of Warcraft" and "Candy Crush".

"When we looked at possible partners, all paths led to Microsoft." In response to questions from investors, Activision Blizzard CEO Bobby Kotick said that mobile games and cloud games are growing in addition to traditional console games, making the battle for supremacy in the entire gaming industry increasingly fierce.

Activision Blizzard had been plagued by sexual harassment scandals before its acquisition by Microsoft. Employees, investors and business partners protested against media reports that Bobby Kotick knew of cultural problems at the company and did nothing about them. While Bobby Kotick didn't resign, he was forced to announce a series of cultural changes that have seen Activision Blizzard fire more than 30 employees and punish about 40 others since July 2021.

Meanwhile, Call of Duty: Pioneer had the lowest media rating of any game in the series during the Christmas holiday shopping season in the US and Europe. As a result, Activision Blizzard stopped reporting call of Duty sales as it had in previous years.

In terms of market environment, the ongoing impact of the epidemic, investors are no longer enthusiastic about the game industry, which may be one of the reasons why Activision Blizzard wants to sell. Analysts expect the combined net booked revenue of Activision Blizzard, ELECTRONIC Arts and Take-Two to grow 10 percent in 2021 after surging 23 percent in 2020, according to FactSet.

For Microsoft, the merger with Activision Blizzard, which will have a global lineup of 32 game studios, in particular Activision Blizzard's mobile subsidiary King, gives the company a chance to tap into the mobile gaming market that it has long coveted.

Microsoft CEO Satya Nadella made it clear to investors that a major goal of the acquisition is to expand into new markets and reach new users under a "mobile first" philosophy. Because of Activision Blizzard's success in mobile games, especially King's candy Crush franchise.

"Meta-universe" is another key word of Microsoft's acquisition. Nadella said gaming is the most dynamic and exciting area of all-platform entertainment today and will play a key role in the evolution of metasverse platforms. Arguably, Microsoft has more exposure to the metasverse than any other Internet giant.

Compared with major tech giants like Google and Apple, Microsoft's gaming business is huge. It sells Hardware and software for its Xbox game console, as well as cloud games and subscription services. In the third quarter of last year, Microsoft's gaming revenue was nearly $3.6 billion, up 16% from a year earlier, led by a 166% increase in hardware sales, driven by continued consumer demand for its Xbox console.

Microsoft's acquisition of Activision Blizzard also gives Microsoft a strong advantage in the whole industry chain in the field of game production and distribution. In recent years, Microsoft has aggressively acquired game studios and promoted cloud gaming and game subscription services in hopes that the Xbox will take a different path from SONY and Nintendo. The acquisition will also give games like World of Warcraft and Diablo a chance to emerge from their recent woes.

But not everyone is ready to applaud the deal, and it may be Microsoft's old rival, SONY, that is taking the biggest hit. SONY shares fell as much as 9.6% in Tokyo trading on Wednesday after the deal was announced, the biggest drop since March 2020.

Microsoft has made no secret of its gaming ambitions. With activision blizzard, Microsoft is expected to significantly surpass SONY in the ability to create game content, increasing revenue by selling more games.

Media reports have suggested that Microsoft plans to keep some Activision Blizzard games on the PlayStation and exclusive some content on the Xbox, a move that would deal a blow to SONY, but Microsoft executives have denied that.

Interestingly, Microsoft and SONY have teamed up on cloud computing, with SONY using Microsoft's cloud services for games and streaming. This also means that the co-operative relationship between the two sides will become more complicated.

Shares of Ubisoft (UBISoft) and CD Projekt (CD Projekt) rose 11.87 percent and 1.57 percent, respectively, on speculation that both companies could be takeover targets.

In the past two years, Google, Amazon, Netflix, And Facebook have all poured resources into games. Google and Amazon are betting on cloud gaming, Facebook is focusing on virtual reality-based "metaverse" products, and Netflix is entering the space. So far, Microsoft has positioned itself to become the game industry's supercarrier in all of these areas.

Related news
SONY Sony WF-1000XM3 true wireless noise canceling headphones disassembly report
Hot news this week
The developer of the dating app Tinder has reached an agreement with Google over billing rules for its app store
Red Elf Lightning erupts in the Himalayas Spectacular Spectacle: Experts Reveal What Exactly Is This?
The founder of the Internet Quick Hand Su Hua was taken away for investigation, and the fast hand responded: the news was not true
Or for Studio Display Pro, the release of Apple's 27-inch Mini LED-backlit Display has been delayed by October
One picture to understand! Blue Factory has issued 3 new machines in a row: self-developed chip blessing, the narrowest lower border
Huawei and the Chinese Academy of Sciences jointly developed the new 3D DRAM solution is expected to break through the key root technology of storage
Tencent established a smart technology company in Chengdu, and its business scope includes Internet data services
I once touched the ceiling of the mobile phone screen! Well-known brands announced that the new flagship is the first to carry the Snapdragon 8+
Or has it been spread insidiously in Communities in Europe and the United States: Should We Be Worried About Monkeypox? Experts demystify
Economist credit card monthly bill $11.4! Only paying for a purchase of Tencent Music, the account manager is busy "condolences"
The most popular news this week
Pinduoduo revenue in the first quarter of 23.8 billion increased by 7% year -on -year
Chinese stocks closed mostly up on Friday, Pinduoduo rose more than 15% Kingsoft Cloud rose more than 7%
Expert: Concerns that emojis cause expression to feel less susceptible may be exaggerated
The Changwu B rocket arrives at the Wenchang launch site and will launch the Wentian Experimental Module of the Chinese space station in July
The DuckDuckGo browser was found to have quietly allowed Microsoft to track it
Pinduoduo released the first quarter report, with a revenue of 23.8 billion yuan, starting the technology flow
Can air disinfection stick kill 99.9%coronary virus? Experts: Several levels of concentration are different
Pinduoduo Q1 revenue of 23.8 billion increased 7%and a monthly survival of 750 million. Vice president said that the growth of growth is inevitable.
Liu Chiping resigned from Tencent Music Director, Zheng Runming took over, and the latter had financial management related background
Pinduoduo: As of 12 months of March 31, 2022, the number of active buyers was 881.9 billion, an increase of 7% year -on -year