Once the four little dragons of Guangdong, Hong Kong and Macao, and made a fortune from sports, how does Aoyuan cope with the 4.4 billion short-term foreign debt?

Recently, according to sources, a top 50 listed real estate company headquartered in Guangzhou is about to undergo bankruptcy and restructuring. In view of the current operating performance of Cantonese housing enterprises, the protagonist who may go bankrupt, the most speculated by the outside world is China Aoyuan.

"Finance and Economics" Weekly consulted a number of Aoyuan insiders on this matter, and the other party said that the company's funds are indeed tight now, but it is only layoffs, and I have not heard of bankruptcy.

Since March last year, China Aoyuan "moved the knife" on the organizational structure, merging the real estate group and the commercial real estate group in its real estate sector, round after round of layoffs, and some departments and even all employees were laid off. Nowadays, everyone in Aoyuan is in danger, and employees automatically enter a state of overtime, afraid that they will become the next "lamb to be slaughtered".

In 2021, when the real estate industry is sluggish, there are not a few housing enterprises that control costs from manpower. Aoyuan, which is extremely short of money, is also laying off employees and cutting salaries to save itself, but it has not fundamentally solved the company's operational crisis.

On January 19, Aoyuan was exposed to illegal sales of the project Hanlin Mingyuan in Qingdao's West Coast New Area and punished by the local Ministry of Housing and Urban-Rural Development. As the founder of the "first project of China's composite real estate", China Aoyuan, which once used the Olympic concept to create a 100 billion real estate enterprise, is now eager to withdraw funds. After the crisis of trust, does Aoyuan still have a chance? 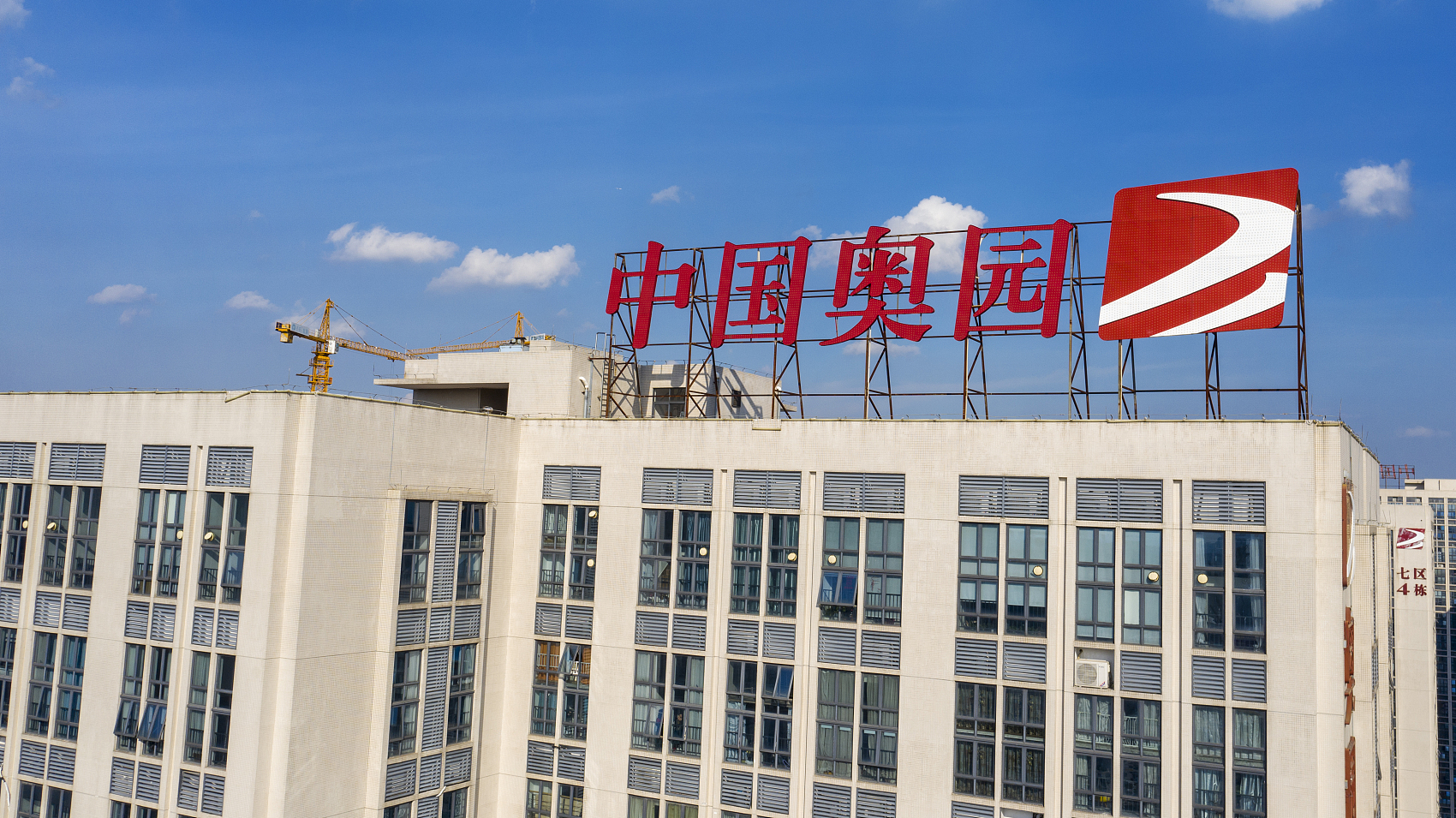 Since the redemption crisis of Aoyuan's wealth management products last year, Guo Ziwen, chairman of China Aoyuan, has made a bold statement that he will become a first-class student who has successfully broken through in the industry's predicament.

At the bailout meeting in December last year, management mentioned that the company's primary goal is to keep all kinds of bonds and funds overdue, including collecting funds from regional companies, selling urban renewal equity, introducing war investment and individual management subscription of fixed increase shares, and even selling high-quality assets of properties.

In November last year, Aoyuan Meigu, a listed subsidiary of China Aoyuan, under the pressure of board members voting against it, spent nearly 79.47 million yuan to purchase three shops controlled by Aoyuan Group to "transfuse" the parent company.

Not only that, Aoyuan has also alleviated debt pressure through financing and finding extension plans for ABS and other trusts, but the company has been slow to move on foreign debt. Some creditors once pessimistically believed that Aoyuan would protect the territory and abandon the outside world.

On January 7, according to the surging news, about 4 to 5 projects of the overseas assets that China Aoyuan is disposing of are already negotiating buyers, and the transaction amount is expected to be about 3 billion yuan. Approaching the threshold of redemption, but the funds have not yet been finalized, which has put a question mark on whether Aoyuan can become an "excellent student".

An industry source close to Aoyuan said that Aoyuan started with commercial real estate, land reserves and business volume are OK, but commercial real estate generally has the problem of slow capital turnover, "coupled with the tightening of real estate policies and market downturn factors last year, the capital chain tension is inevitable." ”

In fact, the crisis of Aoyuan has been seen since 2020. At that time, some industries gave short reports. After entering the 100 billion camp of real estate enterprises for the first time, in early 2020, an anonymous person released a short report against China Aoyuan, believing that Aoyuan has passed "Clear Stock Real Debt" and related transactions in the past few years

At that time, the report was also accused by some investors of being unprofessional, and at that time, whether it was a clear stock real bond or a perpetual bond, it was generally considered to be the main way for real estate companies to smooth their financial statements. But investors did not expect that in order to ensure the healthy development of the real estate industry, regulatory policies tightened in 2021, restricting these financial measures.

Aoyuan's debt risks and illegal operations have also been exposed by the media. According to NetEase Qingliu Studio, a number of wealth management products sold by Aoyuan are suspected of self-financing, and in addition, accounts receivable between internal subsidiaries are used to raise funds in the capital market.

At the end of last year, a number of rating agencies downgraded Aoyuan's credit rating. Aoyuan is also actively discounting promotions to quickly withdraw funds, but unaudited data shows that the contract sales of China Aoyuan in 2021 totaled about 121.03 billion yuan, a year-on-year decrease of 9%, and only 80% of the annual sales target.

An industry insider familiar with Aoyuan pointed out that the brand of the Aoyuan family business is very deep, "so you can see that the changes in management in recent years are not small." As a veteran guangdong real estate enterprise, Aoyuan mainly cultivates the Greater Bay Area, and the expansion of external regions is relatively insufficient, and its management ability is weak. ”

He was once the four little dragons of Guangdong, Hong Kong and Macao, and made a fortune in sports

Like most Guangdong entrepreneurs, Guo Ziwen, the founder of Aoyuan Group, is also a civilian entrepreneur who "fights the world with bare hands". From the beginning of contracting difficult state-owned enterprises to the integration of government resources to become a large enterprise, Guo Ziwen only took 7 years from the strongest "contractor" to China's "first person of composite real estate".

In 1991, Guo Ziwen decided to go to the sea, and contracted the heavily indebted Guangdong Panyu Jian'an Decoration Company with 50,000 yuan to find the first bucket of gold. Subsequently, he contracted Meishan Construction Company, and in 1996, the Gold Industry Villa Garden built by him ended the company's rotten project perfectly, and Guo Ziwen began to officially enter the real estate industry.

In 1998, at the panyu Luoxi Bridge, Guo Ziwen looked at the more than 200 mu of farmland acquired a few years ago, when there were already a number of housing enterprises around the plot, in order to revitalize assets, out of a different way, Guo Ziwen thought of combining real estate projects with sports.

"At that time, when they invited friends to eat and sing, they were no longer interested. But they were willing to ask them to play. And on the weekend, I watched the Guangzhou stadiums full of people, and I thought there must be some market in this area. According to Guo Ziwen's recollection, at that time his gold company was well-known in Panyu, but it was still unknown in the whole of Guangzhou, and in order to play an influence, he came up with the concept of "sports at the doorstep", for which he renamed "Gold Sports Garden" to "Guangzhou Olympic Garden".

The combination with the Olympic Games has made Guo Ziwen's popularity in the industry rise rapidly, and he has also renamed the company "Aoyuan Real Estate". During Beijing's bid to host the Olympics, the name "Olympic Garden" could not belong to a developer, and after becoming a patent of the Chinese Olympic Committee, Guo Ziwen obtained the franchise right to the name.

From breaking 10 billion in 2013 to breaking 100 billion in 2019, Aoyuan has become the first of the "Four Little Dragons of Guangdong, Hong Kong and Macao" in only 6 years. Guo Ziwen once said that the gold in the name of the "Olympics" should be dug up.

In the era of "high debt, high leverage and high turnover" of housing enterprises, Aoyuan has extended the debt term, smoothed the debt structure, and signed agreements with financial institutions such as trusts and funds to raise funds through equity.

"Because it is an equity investment, it will not be reflected as "debt" in the financial statements of the borrowing company, so it can play a role in optimizing the debt level. According to industry analysts, Aoyuan also reduced the net debt ratio by consolidating minority shareholders' equity to increase total equity.

Perhaps, it is the once remarkable "financial skills" that have caused Aoyuan to fall into today's debt crisis. At this time, relying on the sale of assets to save itself, whether Aoyuan can complete the breakthrough also depends on whether the current DOLLAR debt can be successfully resolved.

Related news
Once the four little dragons of Guangdong, Hong Kong and Macao, and made a fortune from sports, how does Aoyuan cope with the 4.4 billion short-term foreign debt?
Hot news this week
Templates for creating new Twitter in the future? Musk's praise of WeChat has triggered a heated discussion on the whole network
Tencent Music's TME live will re-screen Jay Chou's concert on may 20 and 21
Sony's new LinkBuds S headset parameter exposure: only 4.8 grams of comprehensive battery life 20 hours
Weak demand in the mobile market! Domestic shipments of mobile phones fell 40.5% in March to a two-year low
Henan 4 village bank line cannot withdraw cash? CBRC responds! The public security organs have registered an investigation
Baidu: In 2021, an average of 56 billion malicious information of all kinds will be intercepted every year
"Chinese version of LV" is re -executed 680 million! Reporting the property clues of the chairman, up to 8.66 million yuan
Still did it! Canada has banned Huawei and ZTE from participating in the country's 5G network on "national security" grounds
Pig companies continue to increase technology, just launched the smart pig farm, another 100 million to set up a technology company
The Jingdong Express bulk order sent to Shanghai across the country is completely static? JD.com: Not true No such information has been published
The most popular news this week
The domestic screens are rolled to the 2K screen. Why don't Apple follow the roll?
The country line had dropped nearly 2K no one to buy! Apple's most non-existent new version of the new revealed helpless
The average price of AMD graphics cards is infinitely close to the original price NVIDIA still has a long way to go
B station was exposed to layoffs: involving games, overseas business, OGV and other departments
Continuous business adjustment? Ali has been exposed to many sectors layoffs, and the scale of spring recruitment has shrunk sharply
Exposure of Tencent's game business or layoff 10 %: CSIG business group has previously layoffs 15 %
Meizu 19 series coming? Meizu mobile phone appearance patent disclosure: the return of secondary screen
Jingdong crowdfunding 10000mAh mobile power supply: with Apple Lightning and Type-c dual wires
Mobile phone chip CPU energy efficiency ranking: it is comparable to A14
What can we learn about m& # 111nkeypox cases in many countries around the world?