Ifeng.com news on January 20, the official Weibo account of the mobile game "Harry Potter and the Magic Wake" has issued an apology for "being criticized by players for the Chinese New Year event", and said that it will cancel the original Spring Festival wheel on January 26, and all the props in the wheel will be adjusted to participate in the Chinese New Year event.

This morning, the hashtag # PotterAwakeningMobile game Planning was trending on Weibo. "The PVP balance is not well done, and the network often fluctuates; [Fixed] PVE got Underworld buff turntable The clothes were not as fine as before; The so-called clockwork also have their own liver; Games and exam week; You are really geniuses.

It is reported that the mobile game "Harry Potter magic Awakens" has launched the Spring Festival wheel activity. During the Spring Festival, the in-game "turntable" (similar to the lottery mechanism) will include a variety of game items. It only takes a maximum of 29 draws to empty the turntable (get all the items in the turntable), and players can get 22 "lucky winders" (consumables required for the lottery) by participating in the game.

But the rule that participation is required to receive benefits has caused discontent among players. One user said, "There are no benefits in the Lunar New Year event but cheating, and it looks bad to cheat on the double wheel." Male characters in the game were also accused of being sloppy.

It is reported that Harry Potter: The Magic Awakens is an RPG mobile game officially authorized by the original novel and independently developed by NetEase. The mobile game was launched on September 9, 2021, and ranked first in China's iOS bestseller list and download list for several consecutive days. 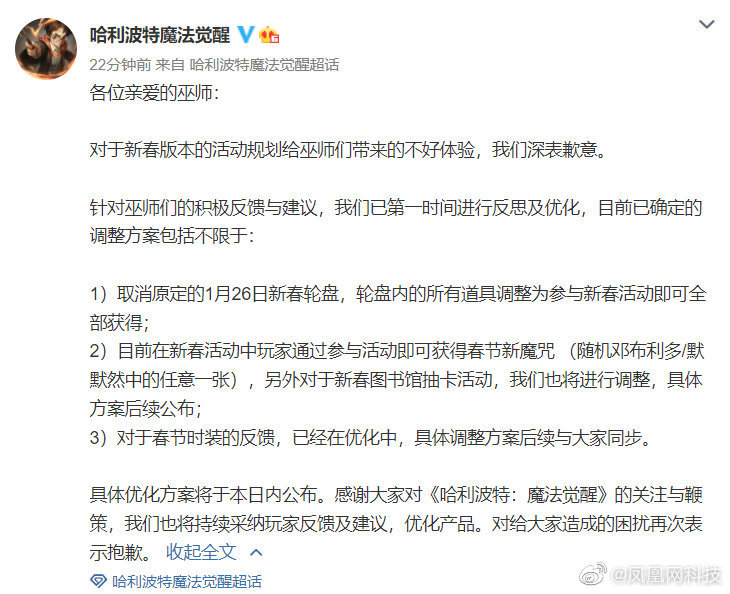 Related news
September 2021 Top 10 of the world's most popular mobile gaming revenue: Original God topped the list
'Harry Potter: The Magic Awakens' insults female players Netease response
Harry Potter hand-walking "insulting women"? The official response was BUG
NetEase's "Harry Potter: Magical Awakening" topped the hot search list: "liver and krypton" caused player dissatisfaction
Thousands of people resign NetEase game planning follow-up Harry Potter mobile game official apology
The game planning was asked by tens of thousands of people to resign from the hot search! Harry Potter: Magical Awakening apologies
Harry Potter hand tour planning is hot and searching, what is the gold mode?
Free is the most expensive! Blizzard's Diablo premium game cost $300,000 to play
Hot news this week
The developer of the dating app Tinder has reached an agreement with Google over billing rules for its app store
Red Elf Lightning erupts in the Himalayas Spectacular Spectacle: Experts Reveal What Exactly Is This?
The founder of the Internet Quick Hand Su Hua was taken away for investigation, and the fast hand responded: the news was not true
Or for Studio Display Pro, the release of Apple's 27-inch Mini LED-backlit Display has been delayed by October
One picture to understand! Blue Factory has issued 3 new machines in a row: self-developed chip blessing, the narrowest lower border
Huawei and the Chinese Academy of Sciences jointly developed the new 3D DRAM solution is expected to break through the key root technology of storage
Tencent established a smart technology company in Chengdu, and its business scope includes Internet data services
I once touched the ceiling of the mobile phone screen! Well-known brands announced that the new flagship is the first to carry the Snapdragon 8+
Or has it been spread insidiously in Communities in Europe and the United States: Should We Be Worried About Monkeypox? Experts demystify
Economist credit card monthly bill $11.4! Only paying for a purchase of Tencent Music, the account manager is busy "condolences"
The most popular news this week
The key META VR header equipment of the Yuan universe game is accused of patent infringement
Sino -disease control expert: Omikon vaccine has entered the clinical virus evolution and uncertain
The iOS version of the app icon disappears! Alipay high response: Fund safety is not affected
Pinduoduo Q1 revenue of 23.8 billion increased by 7% Technology and agricultural strategy into a dual engine
Musk: Tesla peripheral products can be purchased with Dogecoin
Luo Dayou Sun Yanzi brushed the scenes behind the screen and Tencent began to grab traffic again
Pinduoduo revenue in the first quarter of 23.8 billion increased by 7% year -on -year
Chinese stocks closed mostly up on Friday, Pinduoduo rose more than 15% Kingsoft Cloud rose more than 7%
Expert: Concerns that emojis cause expression to feel less susceptible may be exaggerated
The Changwu B rocket arrives at the Wenchang launch site and will launch the Wentian Experimental Module of the Chinese space station in July