On January 18, Dong Xiaodian issued an announcement that due to business adjustment, Dong Xiaodian has closed all functions other than cash withdrawal and withdrawal authentication, online customer service, no longer calculating income. In addition, Dong Xiaodian applet will close the underside on February 28, 2022, and completely stop all services and remind users to complete the cash as soon as possible. 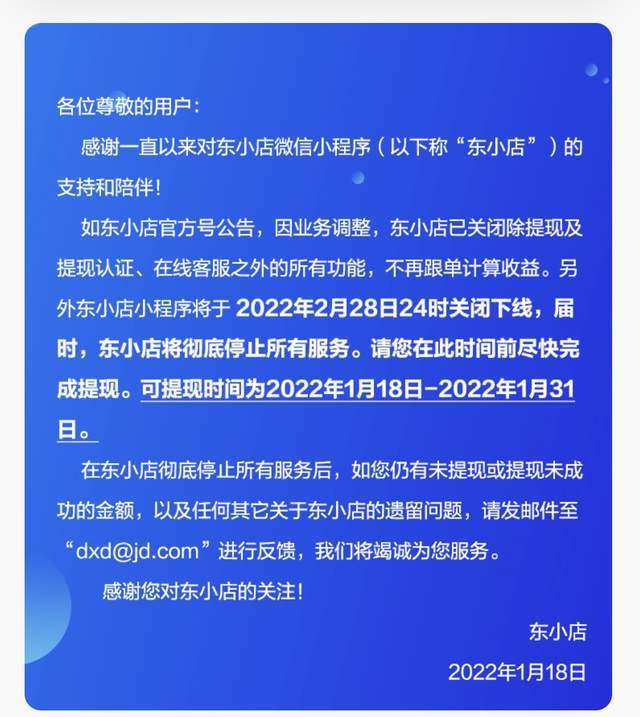 According to the notice released by the official website of Dong Xiaodian, in order to protect the rights of users, Dong Xiaodian United Fenxiang launched a translation policy, and the strategic partner of Dong Xiaodian can translate to the Fenxiang platform.

Investigations show that the Fenxiang platform is a social e-commerce applet, and 99% of Jingdong has a coupon or rebate in Fenxiang, and some of the goods can choose Jingdong distribution. Fenxiang's legal person Deng Zhengping is the founder and general manager of the former Jingdong Intelligent Home, and has also served as the founder and total person in charge of Jingdong Mobile Department. Some people in Dong Xiaodian have disclosed that it is mainly adjusted in Jingdong, and Dong Xiaodian is the internal incubation project in Jingdong. The output of production and research is not as good as the market, so it is suspended.

In this context, Jingdong launched a social e-commerce platform "Dong Xiaodian" in November 2019, the main mode is S2B2C. That is, small B users promote the promotion of the platform applet, and the exclusive coupons of Dong Xiaodian Channel products are released in WeChat communities, let the sink market users buy low-cost products and earn corresponding commissions. These items come from Jingdong Mall and enjoy Jingdong's after-sales service. Among them, 99% of goods can enjoy special benefits, and the platform has no threshold.

According to the official website, as of June 2020, there were approximately 210,000 store director in Dong Xiaodian realized the month, and the Dong Xiaodian also launched a 2.0 version, and added "adding WeChat" function, and announced Adopting a strategic cooperation with Dada Group, further enriching the commodity pool and supply chain of Dong Xiaodian, and the East shop can sell individual merchants and Jingdong to home products. However, since April 2021, Jingdong store has no new news.

In fact, before Dong Xiaodian, there have been a number of social business platforms announced the shutdown. Last year, Ali's "Tao Ship" released the announcement, due to business strategy adjustment, commodity transactions and other related functions will be stopped on October 11, 2021. On January 17, 2021, Xiaomi's "product has a fish" also claimed that due to business adjustment, excellent products will be terminated by Operation of Operations on March 17, 2022, and will not be able to access the products with fish APPs and applets.

In addition to the Internet giants that have an exit, other social e-commerce platforms are also difficult. On August 4th, 2021, there were suppliers to explode that Bayi arrears more than 1400 supplier goods, and the amount of margin and payment of the money arrears exceeded 140 million yuan. In addition, "The First Share of Social E-Commerce" has also received Nasdaque token alerts in September this year. The three quarterly report showed that the gathering achieved operating income of 1.694 billion yuan, down nearly 60% of the same period last year, margin 626 million yuan, near the same period of last year.

Social e-commerce is no longer

Social e-commerce "pull the head, distribution" model has been questioned for suspected pyramid schemes, there is a risk of chain breaks. With the supervision policy, many social business platforms have also been regulated. According to the public data, 50 social business platforms were punished during 2017, and 2020 were more than 20 in the handicrafts of the penalty society. Including peanut diary, gathering, microwacy, zebra member, a brother, honey source, is all suspected of being frozen funds or is in a fine.

On December 29, 202, the Municipal Supervision Bureau of Yuhua District, Hebei Province, the "TST Secret" parent company Shanghai Darwei is suspected of pyramid schemes, and social e-commerce models have been involved in the tips of public opinion. In this regard, the industry believes that social e-commerce advocates fission, secondary distribution, and three episodes distribution are a little pilot nature, which is the focus of policy strikes, so it has been greatly impacted.

According to "electricity treasure", the number of social e-commerce financing has reached the peak of investment in 2018 - 2019. After that, the number of financing incidents in social business in 2021 fell by 22.23% year-on-year. With the electric business entrance to live e-commerce, major social e-commerce has also announced the transformation of the live broadcast track. Since last year, there have been future markets, Bayi, and zebra members have launched a live broadcast function.

Related news
"Queen of Marketing" has a big move Dong Mingzhu is going to break the original marketing system of Gree
Dong Xiaodian announced the shuttlecock, social e-commerce style encountered life and death
Xiaodian Technology denies layoffs: business form upgrade Normal organization and personnel structure adjustment
Xiaodian Technology was exposed to lay off about 2,000 people, accounting for about 40% of the company's total number of people.
Hot news this week
The developer of the dating app Tinder has reached an agreement with Google over billing rules for its app store
Red Elf Lightning erupts in the Himalayas Spectacular Spectacle: Experts Reveal What Exactly Is This?
The founder of the Internet Quick Hand Su Hua was taken away for investigation, and the fast hand responded: the news was not true
Or for Studio Display Pro, the release of Apple's 27-inch Mini LED-backlit Display has been delayed by October
One picture to understand! Blue Factory has issued 3 new machines in a row: self-developed chip blessing, the narrowest lower border
Huawei and the Chinese Academy of Sciences jointly developed the new 3D DRAM solution is expected to break through the key root technology of storage
Tencent established a smart technology company in Chengdu, and its business scope includes Internet data services
I once touched the ceiling of the mobile phone screen! Well-known brands announced that the new flagship is the first to carry the Snapdragon 8+
Or has it been spread insidiously in Communities in Europe and the United States: Should We Be Worried About Monkeypox? Experts demystify
Economist credit card monthly bill $11.4! Only paying for a purchase of Tencent Music, the account manager is busy "condolences"
The most popular news this week
Luo Dayou Sun Yanzi brushed the scenes behind the screen and Tencent began to grab traffic again
Pinduoduo revenue in the first quarter of 23.8 billion increased by 7% year -on -year
Chinese stocks closed mostly up on Friday, Pinduoduo rose more than 15% Kingsoft Cloud rose more than 7%
Expert: Concerns that emojis cause expression to feel less susceptible may be exaggerated
The Changwu B rocket arrives at the Wenchang launch site and will launch the Wentian Experimental Module of the Chinese space station in July
The DuckDuckGo browser was found to have quietly allowed Microsoft to track it
Pinduoduo released the first quarter report, with a revenue of 23.8 billion yuan, starting the technology flow
Can air disinfection stick kill 99.9%coronary virus? Experts: Several levels of concentration are different
Pinduoduo Q1 revenue of 23.8 billion increased 7%and a monthly survival of 750 million. Vice president said that the growth of growth is inevitable.
Liu Chiping resigned from Tencent Music Director, Zheng Runming took over, and the latter had financial management related background