Take stock of Microsoft's top ten acquisitions: 3 of the more than 10 billion US dollars Nokia is not in the top 5

I believe that everyone has paid attention to the news that Microsoft has acquired Activision Blizzard for nearly $70 billion. It is understood that Microsoft will acquire game giant Activision Blizzard for $68.7 billion.Assuming the deal goes smoothly, it is likely to be subject to some scrutiny from the FTC's revised changes, which will undoubtedly change the face of games and emerging technologies such as metaversities.

This is the most expensive acquisition Microsoft has ever made, so how does the acquisition of Activision Blizzard compare to Microsoft's other acquisitions? We can take a look at the table below. 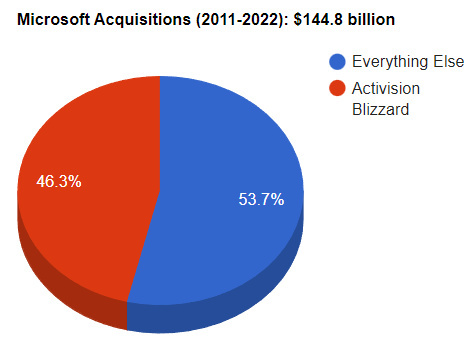 The fact that all but two of the first ten acquisitions took place after 2011 suggests that Microsoft is using its growing heap of cash rather than sitting still.

The cost performance of Microsoft's acquisition of Activision Blizzard is not yet known.But Microsoft's acquisition of Mojang, the team behind Minecraft, for only $2.5 billion in 2014, is clearly a bargain compared to similar companies. While many questioned Microsoft's value at the time (and predicted the company would ruin the franchise), Minecraft has actually become one of the most successful games of all time. Currently, Minecraft has 141 million monthly active users (up from 40 million in 2016) and more than $350 million in book revenue.

Of course, not all of Microsoft's big acquisitions have been so successful.For example, Nokia's mobile smartphone division was acquired, integrated, and then in 2017, Nokia was strategically abandoned along with Windows Phone.

Activision Blizzard (to be determined)

Nuance (to be determined)

Pending means that the acquisition is still not completely settled, and may encounter obstacles such as anti-monopoly investigations. But it is clear that Microsoft, under Nadella's leadership, is making a very aggressive acquisition.

In these acquisitions, although LinkedIn is often the focus of jokes, Microsoft is laughing more happily on the way. This professional social network now generates more than $10 billion in revenue each year. Considering that Microsoft acquired it for $26 billion more than five years ago, the segment is undoubtedly profitable and continues to grow (revenue in July 2021 increased by 21% year-on-year).

GitHub, which is critical to open source software development, is said to have added 16 million new users in 2021 alone, bringing its total number of users to 73 million. It is predicted that by 2025, GitHub will have more than 100 million users.

For objects like ZeniMax, there are also many advantages for Microsoft, ZeniMax has Bethesda Softworks, id Software, Arkane Studios, Machine Games, Tango, and game IP such as DOOM, Elder Scrolls, Fallout, and Quake. When combined with Mojang and Activision Blizzard (assuming the acquisition is approved), Microsoft certainly gets a great opportunity to continue to evolve the Xbox Game Pass Service (XGP).

All in all, Activision Blizzard is a massive acquisition by Microsoft. Apparently, the company made gaming a top priority, and even Phil Spencer was named CEO of Microsoft's games division.

Microsoft is burning money at an even faster rate than it did a decade ago, but as of September 2021, the company is sitting on $130.615 billion. In other words, while the acquisition will cost a lot, Microsoft can still easily afford it. Now, let's wait and see if the deal is approved.

Related news
US space force
Google AR AI visual world cultural heritage microbeauty hologram (WIMI.US) digital display PK traditional model
Nokia C3 evaluation: zhanruixin, native Android Qingliu
Take-Two announced the acquisition of social game developer Zynga for $12.7 billion
Hot news this week
The developer of the dating app Tinder has reached an agreement with Google over billing rules for its app store
Red Elf Lightning erupts in the Himalayas Spectacular Spectacle: Experts Reveal What Exactly Is This?
The founder of the Internet Quick Hand Su Hua was taken away for investigation, and the fast hand responded: the news was not true
Or for Studio Display Pro, the release of Apple's 27-inch Mini LED-backlit Display has been delayed by October
One picture to understand! Blue Factory has issued 3 new machines in a row: self-developed chip blessing, the narrowest lower border
Huawei and the Chinese Academy of Sciences jointly developed the new 3D DRAM solution is expected to break through the key root technology of storage
Tencent established a smart technology company in Chengdu, and its business scope includes Internet data services
I once touched the ceiling of the mobile phone screen! Well-known brands announced that the new flagship is the first to carry the Snapdragon 8+
Or has it been spread insidiously in Communities in Europe and the United States: Should We Be Worried About Monkeypox? Experts demystify
Economist credit card monthly bill $11.4! Only paying for a purchase of Tencent Music, the account manager is busy "condolences"
The most popular news this week
Pinduoduo Q1 revenue of 23.8 billion increased by 7% Technology and agricultural strategy into a dual engine
Musk: Tesla peripheral products can be purchased with Dogecoin
Luo Dayou Sun Yanzi brushed the scenes behind the screen and Tencent began to grab traffic again
Pinduoduo revenue in the first quarter of 23.8 billion increased by 7% year -on -year
Chinese stocks closed mostly up on Friday, Pinduoduo rose more than 15% Kingsoft Cloud rose more than 7%
Expert: Concerns that emojis cause expression to feel less susceptible may be exaggerated
The Changwu B rocket arrives at the Wenchang launch site and will launch the Wentian Experimental Module of the Chinese space station in July
The DuckDuckGo browser was found to have quietly allowed Microsoft to track it
Pinduoduo released the first quarter report, with a revenue of 23.8 billion yuan, starting the technology flow
Can air disinfection stick kill 99.9%coronary virus? Experts: Several levels of concentration are different