In the VR hardware market of the meta-universe, Meta (formerly known as Facebook) maintains a leading position with a market share of 75%, its Oculus ranks first, and Opubade VR and Sony VR rank second and third (data sourced from Counterpoint's global VR device share list in the first quarter of 2021). 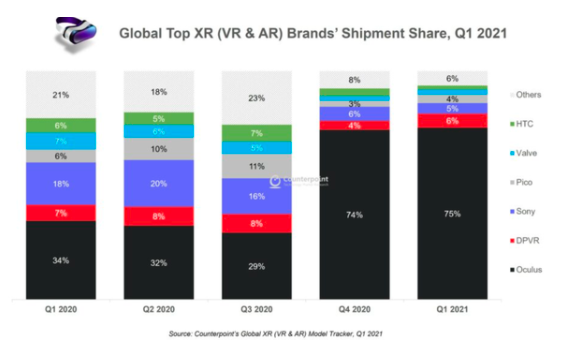 Not to be outdone, other bigwigs in MAMAA (the five technology giants in the United States) have laid out the VR headset market. Microsoft has HoloLens, and Apple's VR/AR headset may be "late" but is still in progress, but search giant Google has not moved.

Recently, according to The Verge, citing two people familiar with the project, the search giant recently began stepping up work on an AR helmet, code-named Project Iris, hoping to ship in 2024.

According to the two insiders, who asked for anonymity, google devices, like The upcoming headsets from Meta and Apple, use exterior-facing cameras that blend computer graphics with real-world video data. Compared to existing AR glasses from companies like Snap and Magic Leap, it creates a more immersive mixed reality experience.

Currently, Google's project is developing an early prototype in a factory in the San Francisco Bay Area, similar to a pair of ski goggles, that doesn't require a connection to an external power source.

Google's headset is still in the early stages of development and has no clear marketing strategy, suggesting that the target year for 2024 may be more of a vision. The hardware is powered by a custom Google processor, just like its latest Google Pixel smartphone, and runs on Android.

Although recent job postings indicate that a unique operating system is in development. Given the power constraints, however, Google's strategy is to use its data centers to render some graphics remotely and transmit them to headphones over an internet connection. The Pixel team was involved in some of the hardware processing, but it's unclear if the headset will eventually be branded as the Pixel.

Google seems to have stagnated in recent years compared to Microsoft and Meta, which have made a high-profile move into the metaverse, while Project Iris marks Google's return to the ranks of hardware devices. In fact, Google was the first pioneer of the meta-universe world, but the road has not been smooth.

As early as 2012, Google released a prototype of AR glasses, and then landed in the US market in 2014, and was forced to take down shelves because of negative news.

In 2017, Google released AR glasses , Google Glass , but because of its high price and difficulty in mass production, the device is considered a craft rather than a consumer electronics product.

In early 2021, Google pushed ahead with the biggest move in smart hardware in recent years – the acquisition of Fitbit. At the Google I/O conference shortly thereafter, Google announced plans to merge its Android Wear platform with Samsung's Tizen-based watch ecosystem, which was seen as a new move by Google to power wearables.

This year, wall Street insiders mentioned that Gou joined forces with Google to break into the meta-universe world.

As a secret that Google has been hiding, Project Iris is hidden in a building that requires special key card access and confidentiality agreements. The core team working on the helmet has about 300 people, and Google plans to hire hundreds more. The project leader is Clay Bavor, an executive who reports directly to Google CEO Sundar Pichai.

Related news
Facebook confirms the development of AR glasses and the construction of VR/AR in the real world
Hot news this week
The developer of the dating app Tinder has reached an agreement with Google over billing rules for its app store
Still did it! Canada has banned Huawei and ZTE from participating in the country's 5G network on "national security" grounds
Red Elf Lightning erupts in the Himalayas Spectacular Spectacle: Experts Reveal What Exactly Is This?
Shipments in the first quarter fell 11%, exposed Xiaomi, OPPO, Vivo cut orders 20%, Apple bucked the trend to increase production
The founder of the Internet Quick Hand Su Hua was taken away for investigation, and the fast hand responded: the news was not true
Wang Xiang, president of Xiaomi, explained that a shortage of low-end chips is a major challenge in overseas markets
Or for Studio Display Pro, the release of Apple's 27-inch Mini LED-backlit Display has been delayed by October
Tencent Q1: The business service business has "slightly decreased" year -on -year, and resource centralized video cloud and network security | View financial report
One picture to understand! Blue Factory has issued 3 new machines in a row: self-developed chip blessing, the narrowest lower border
Sony released the active noise-canceling headphones WH-1000XM5, equipped with 2 chips and 8 microphones
The most popular news this week
Audi advertising poster photos only sell for 8 yuan? Photographers question the unreasonable use of the photo purchase
Twitter spent $150 million to settle privacy and security lawsuits with the U.S. government
Hong Kong Hang Seng Index Opens 0.5% Baidu Hong Kong Stocks Open More Than 2%
Amazon's new CEO participated in a shareholders' meeting for the first time: to restore normal profit, ready to cut off the excess warehouse
Baidu, Shunwei and Fosun are shareholders, and pharmaceutical Internet "unicorn" pharmacists help hand over the watch to the Hong Kong Stock Exchange
Google CEO Pichai: Recession fears intensify The cycle volatility in the tech industry is even more intense
Amazon CEO first appeared at the shareholders' meeting: to restore normal profit
Sony claims that the full recovery of membership upgrade fees is a technical error
Taobao 618 will be launched in the Yuan universe shopping: three -dimensional "shopping Taobao"
Yuncong will be listed on the Science and Technology Innovation Board on May 27 at 15.37 yuan per share