IT House January 24 news, 2022 Spring Festival is coming, today WeChat official public account "WeChat Pie" published an article, detailing the new feature of "fission distribution" of the red envelope cover. The creator of the red packet cover can set the number of red packets issued and the fission distribution number in the background.

After a user distributes a red packet, the user who receives the red packet can click the "Receive the same money" button to directly get the cover of the same red packet. 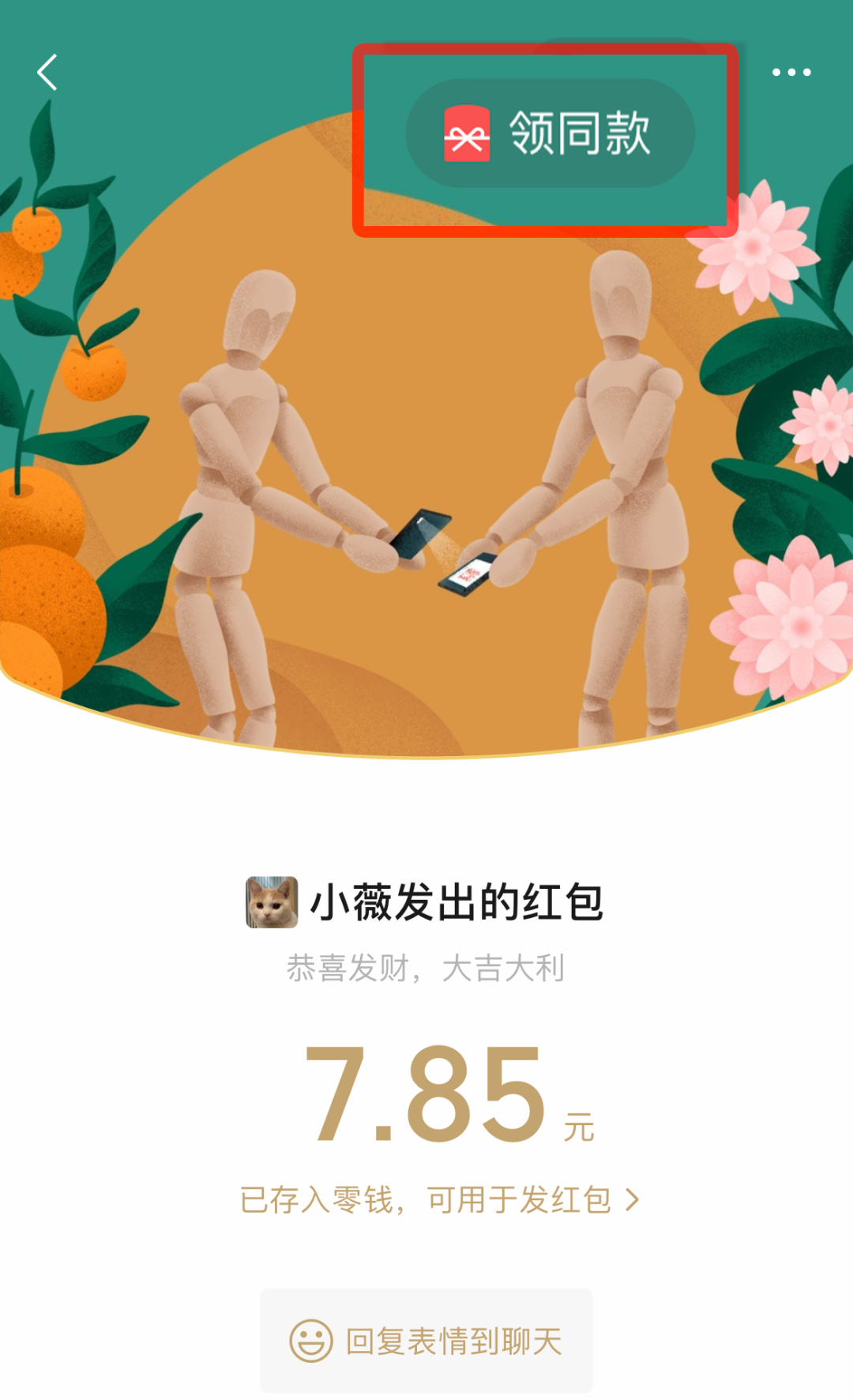 Users who have already claimed this cover will not see the "Receive Same" entry. When the fission quantity is consumed, there is no longer a "same paragraph" entrance.

In the background setting, the number of distributions minus the number of fission is the actual number of red envelopes that can be directly received. The amount issued by Fission can only be collected through the "Receive The Same Money" function.

At the end of the article, the official also complained about the delay in taking a holiday, and issued the cover of the "Chasing Light 2022" red packet, which has been received so far. 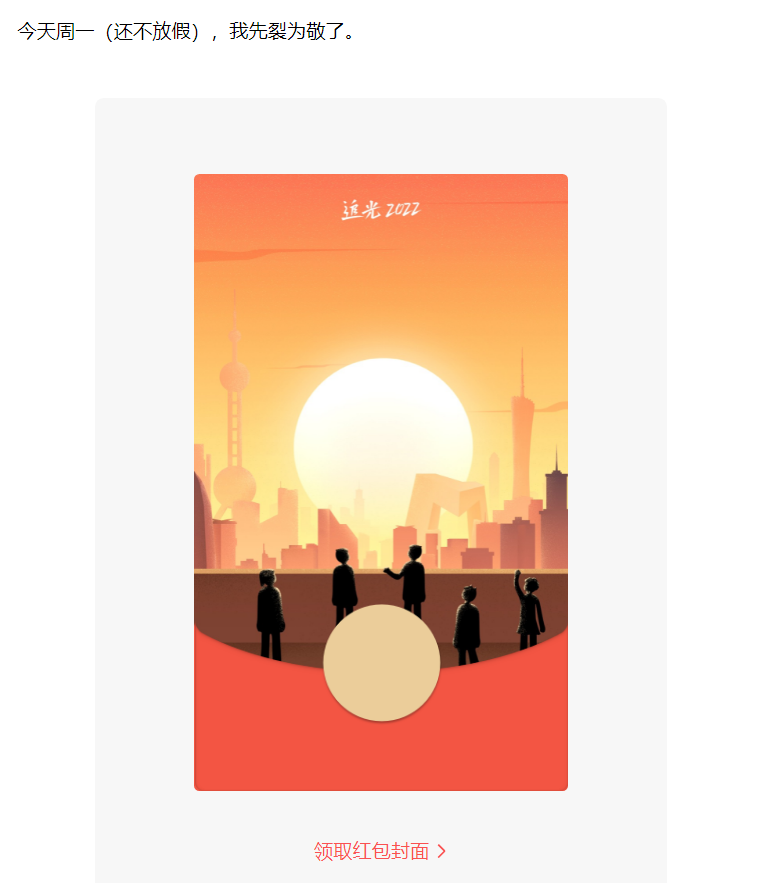 IT Home learned that through the WeChat public account certified by the enterprise, you can log in to the red envelope customization webpage and customize the red envelope cover yourself. The cover page needs to be approved before it can be passed, and the cost of different distribution quantities varies. 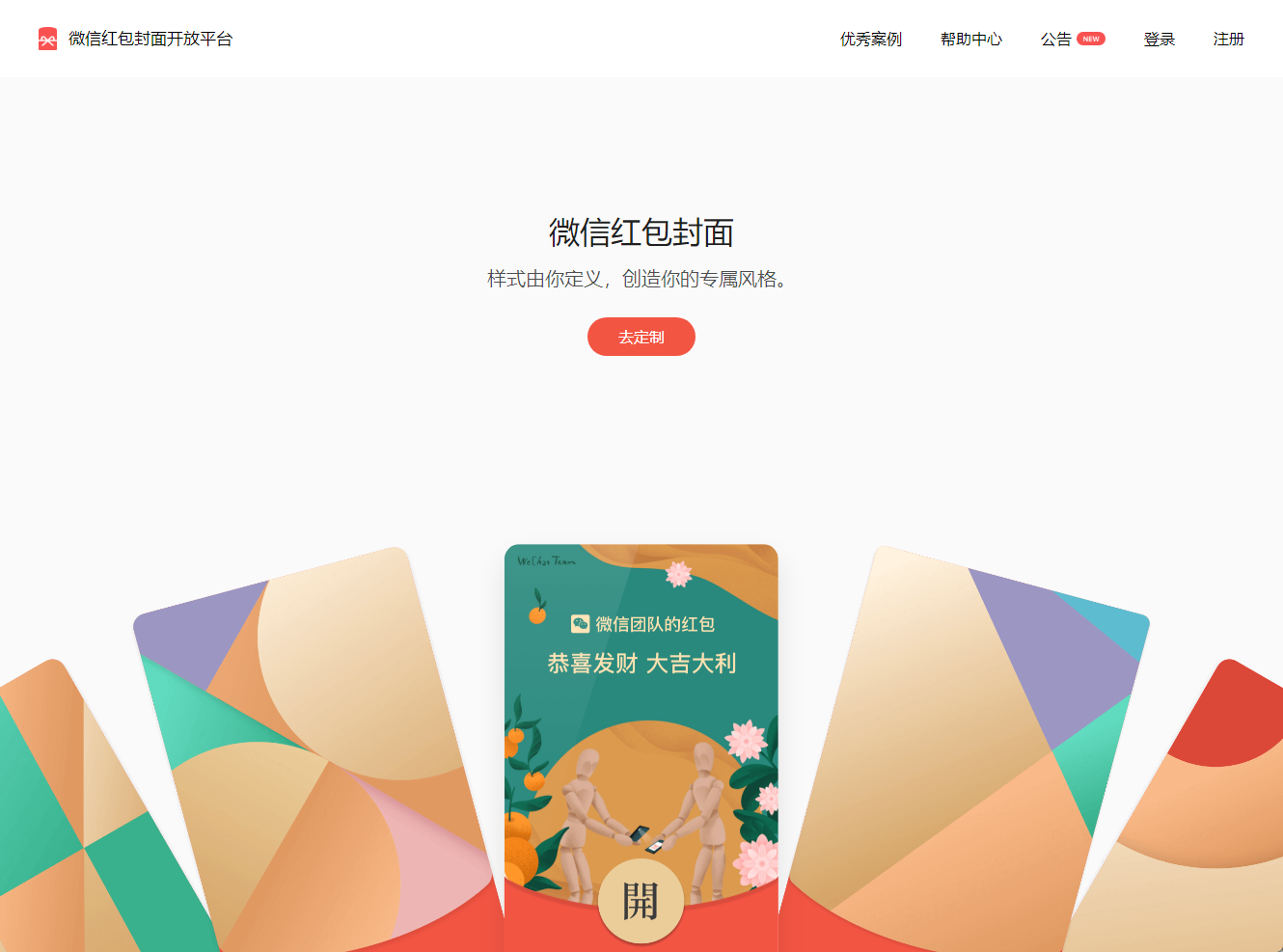 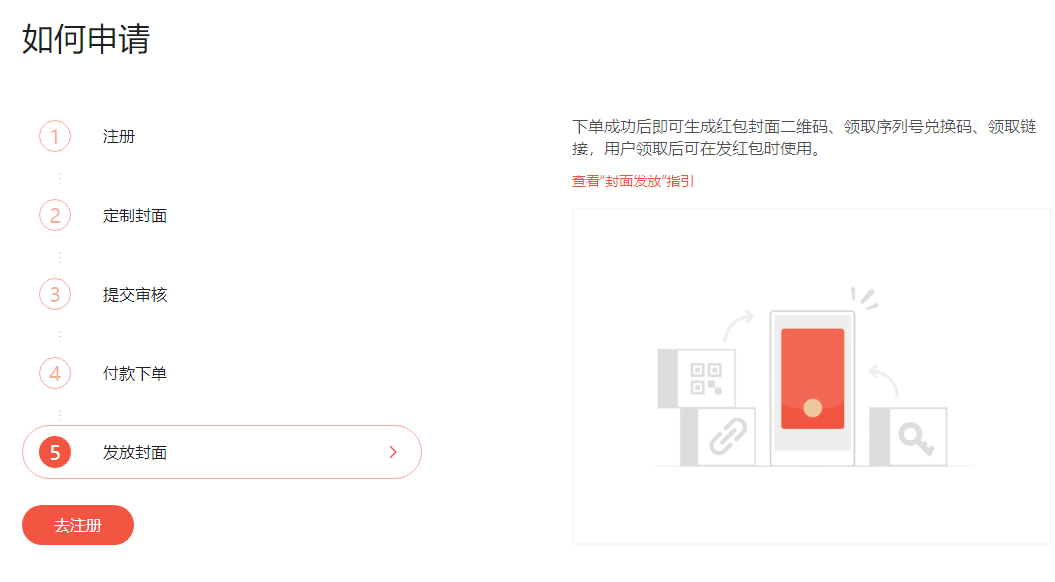 Related news
The public number article supports the release of customized WeChat envelopes, each with a maximum of 3 entries.
Google launched envelope app to put mobile phone into paper case to control mobile addiction
Change name to avoid ban? Tencent: wecom and wechat are different products
Tencent releases Q1 financial report: revenue 135.3 billion yuan, wechat / wechat monthly life 1.24 billion yuan
WeChat OUT service no longer supports Hong Kong users to call Hong Kong local phone numbers
WeChat red envelope cover supports fission distribution: you can receive the same model when grabbing red packets
Tencent will rectify automatic grab red envelopes to persuade everyone to do not use
Hot news this week
The developer of the dating app Tinder has reached an agreement with Google over billing rules for its app store
Red Elf Lightning erupts in the Himalayas Spectacular Spectacle: Experts Reveal What Exactly Is This?
The founder of the Internet Quick Hand Su Hua was taken away for investigation, and the fast hand responded: the news was not true
Or for Studio Display Pro, the release of Apple's 27-inch Mini LED-backlit Display has been delayed by October
One picture to understand! Blue Factory has issued 3 new machines in a row: self-developed chip blessing, the narrowest lower border
Huawei and the Chinese Academy of Sciences jointly developed the new 3D DRAM solution is expected to break through the key root technology of storage
Tencent established a smart technology company in Chengdu, and its business scope includes Internet data services
I once touched the ceiling of the mobile phone screen! Well-known brands announced that the new flagship is the first to carry the Snapdragon 8+
Or has it been spread insidiously in Communities in Europe and the United States: Should We Be Worried About Monkeypox? Experts demystify
Economist credit card monthly bill $11.4! Only paying for a purchase of Tencent Music, the account manager is busy "condolences"
The most popular news this week
Pinduoduo revenue in the first quarter of 23.8 billion increased by 7% year -on -year
Chinese stocks closed mostly up on Friday, Pinduoduo rose more than 15% Kingsoft Cloud rose more than 7%
Expert: Concerns that emojis cause expression to feel less susceptible may be exaggerated
The Changwu B rocket arrives at the Wenchang launch site and will launch the Wentian Experimental Module of the Chinese space station in July
The DuckDuckGo browser was found to have quietly allowed Microsoft to track it
Pinduoduo released the first quarter report, with a revenue of 23.8 billion yuan, starting the technology flow
Can air disinfection stick kill 99.9%coronary virus? Experts: Several levels of concentration are different
Pinduoduo Q1 revenue of 23.8 billion increased 7%and a monthly survival of 750 million. Vice president said that the growth of growth is inevitable.
Liu Chiping resigned from Tencent Music Director, Zheng Runming took over, and the latter had financial management related background
Pinduoduo: As of 12 months of March 31, 2022, the number of active buyers was 881.9 billion, an increase of 7% year -on -year