On January 26, Beijing time, China successfully launched the Land Probe I 01 Group A satellite (short for: The satellite is equipped with China's first high-precision surface micro-deformation monitoring radar system based on space observation. This is A very picky "passenger". For this, the attitude and Orbit Control subsystem development team of the Eighth Institute of China Aerospace Science and Technology Corporation endowed the satellite with excellent "driving" technology. 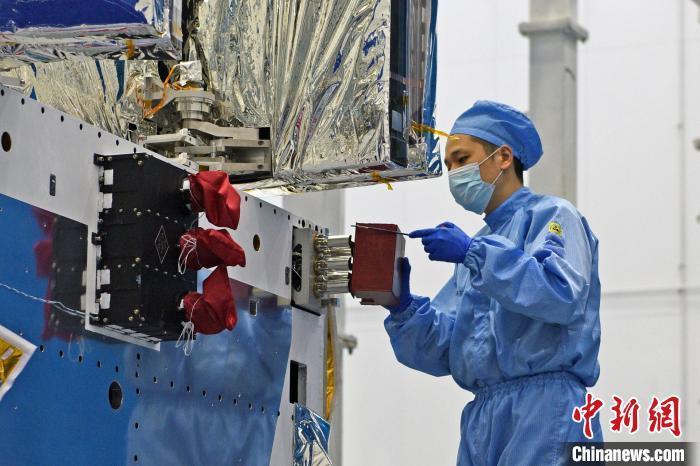 On January 26, China successfully launched the Land Probe I 01 group A satellite on A Long March 4C carrier rocket. The picture shows the satellite development data.

"Time and Space Revisiting" : The premise of geological disaster prediction

"Land detection 1 01 set A star" satellite, deputy chief designer of Wang Wenyan played an example: "attitude orbit control subsystem is the satellite's driving system, it all depends on how to design 'passengers' personalized requirements, some' passengers' need photographs of the vision of one part of the earth, which requires attitude orbit control subsystem in good time, sufficient stability; Some passengers like to take close-ups, which requires the attitude track control subsystem to be flexible enough to never lose track. The most important requirement for landprobe 01 a-star is to be able to recreate the target with high precision."

"When a satellite is constantly orbiting the Earth, the so-called high-precision 'spacetime revisit' means that after a regression period, the satellite can strictly return to the original target point." Wang wenyan said. She further explained that the constraint of both time and space is an important prerequisite for landprobe I 01 GROUP A satellite to be able to monitor the surface deformation, thus supporting the prediction of geological disasters.

When A satellite flies in space, it actually has A "lane". Affected by various factors, the flight path of landprobe 1, 01 group A will change up and down, and the "lane" formed is like A three-dimensional "pipe".

In order to ensure that the satellite runs within the prescribed "pipeline" without yawing, the attitude and Orbit control sub-system team of the Eighth Institute of China Aerospace Science and Technology Corporation has created an "automatic pilot system" with high-precision pipeline navigation and control as the core, allowing landprobe NO. 01 Group A satellite to run independently and stably.

"We take the target reference orbit as the central axis, and the orbit control precision requirements as the radius of the stretched into a three-dimensional space, shape like a pipe, we want to firmly control the satellite in this pipe space." Du Yaoke, chief designer of the satellite's attitude and orbit control subsystem, said. He said the pipe-navigation technology can accurately calculate the time and space deviation of the satellite's yaw, and then drive the "steering wheel" to keep the satellite in its predetermined space at all times.

According to the report, during repeated observation, the control radius of the orbit pipe of the Landprobe 1 01 group A satellite can be precisely controlled within 350 meters, reaching the international advanced level.

Innovative development team is presented based on the theory of "virtual formation flight" orbit control scheme, which is the target reference orbit as A "hypothetical" star, let the land detection 1 01 independent set of A star to follow, give satellite "autonomous" ability, and set up A "budget" control strategy, and as far as possible reducing the consumption of spaceborne propellant. According to the introduction, this approach is also an important development trend in the field of long-life application satellites in the future.

To meet the mission requirements, the satellite has been pre-installed with a target reference orbit with a regression accuracy of meters, or "navigation route," to guide the satellite to its predetermined location on time and accurately, said Du Yaoke, the chief designer. The mission of attitude orbit control subsystem is to ensure that the satellite can always steer strictly according to the "navigation route" without yawing under the influence of the real complex space environment through orbit keeping control technology. (after)

Related news
Deep net|Successful launch of the thousand-day one. How far is China's commercial space flight from Space X?
Samsung's new space display on the shelf to save players from cervical spondylosis?
Space X delayed the launch of 60 satellite chains again due to hardware problems
China core international: China core from A-share reactor
Chinese core from A-share reactor
In five years, can we really wait for China's space X?
[Hard Technology Weekly] Week 47: GPU company Moorethread raised $2 billion in Series A funding and commercial aerospace company Sierra Space raised $1.4 billion in Series A funding
Reveal the "land Probe 1 A star" space autopilot: "time and space revisit" to predict geological disasters
Hot news this week
The developer of the dating app Tinder has reached an agreement with Google over billing rules for its app store
Red Elf Lightning erupts in the Himalayas Spectacular Spectacle: Experts Reveal What Exactly Is This?
The founder of the Internet Quick Hand Su Hua was taken away for investigation, and the fast hand responded: the news was not true
Or for Studio Display Pro, the release of Apple's 27-inch Mini LED-backlit Display has been delayed by October
One picture to understand! Blue Factory has issued 3 new machines in a row: self-developed chip blessing, the narrowest lower border
Huawei and the Chinese Academy of Sciences jointly developed the new 3D DRAM solution is expected to break through the key root technology of storage
Tencent established a smart technology company in Chengdu, and its business scope includes Internet data services
I once touched the ceiling of the mobile phone screen! Well-known brands announced that the new flagship is the first to carry the Snapdragon 8+
Or has it been spread insidiously in Communities in Europe and the United States: Should We Be Worried About Monkeypox? Experts demystify
Economist credit card monthly bill $11.4! Only paying for a purchase of Tencent Music, the account manager is busy "condolences"
The most popular news this week
Pinduoduo Q1 revenue of 23.8 billion increased by 7% Technology and agricultural strategy into a dual engine
Musk: Tesla peripheral products can be purchased with Dogecoin
Luo Dayou Sun Yanzi brushed the scenes behind the screen and Tencent began to grab traffic again
Pinduoduo revenue in the first quarter of 23.8 billion increased by 7% year -on -year
Chinese stocks closed mostly up on Friday, Pinduoduo rose more than 15% Kingsoft Cloud rose more than 7%
Expert: Concerns that emojis cause expression to feel less susceptible may be exaggerated
The Changwu B rocket arrives at the Wenchang launch site and will launch the Wentian Experimental Module of the Chinese space station in July
The DuckDuckGo browser was found to have quietly allowed Microsoft to track it
Pinduoduo released the first quarter report, with a revenue of 23.8 billion yuan, starting the technology flow
Can air disinfection stick kill 99.9%coronary virus? Experts: Several levels of concentration are different