Ministry of Industry and Information Technology: 355 million 5G users in China in 2021

Original title: Ministry of Industry and Information Technology: In 2021, China's telecommunications business revenue will increase by 8.0% to 1.47 trillion yuan, and 5G users will be 355 million

IT Home January 26 news, today the Ministry of Industry and Information Technology released the "2021 Communications Industry Statistical Bulletin". In 2021, China's communications industry will actively promote the construction of a network power and a digital China, and the construction coverage and application popularization of new information infrastructure such as 5G and Gigabit optical network will be fully accelerated, providing strong support for creating new advantages in the digital economy and enhancing the new momentum of economic development. The quality of industry development and the level of growth have been further improved, and a good start to the "14th Five-Year Plan" has been achieved.

According to preliminary calculations, the cumulative revenue of telecommunications services in 2021 will reach 1.47 trillion yuan, an increase of 8.0% over the previous year, and the growth rate will increase by 4.1 percentage points year-on-year. The total amount of telecommunications services at last year's prices reached 1.7 trillion yuan, an increase of 27.8% year-on-year.

(4) The scale of mobile phone users has increased slightly, and the number of 5G users has expanded rapidly

In terms of mobile phone penetration, Beijing and Shanghai are far ahead, with more than 176 phones per 100 people.

(5) The proportion of broadband access users at 100 megabytes and above continues to rise, and gigabit users accelerate their development 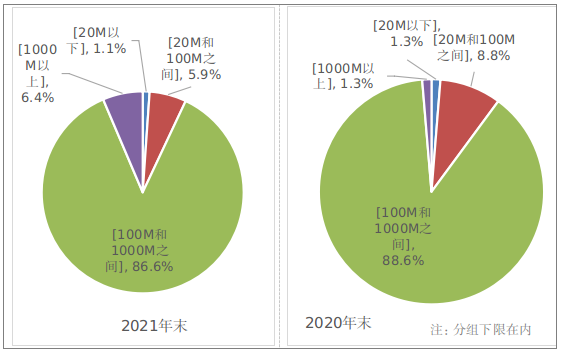 IT Home learned that by the end of 2021, the three basic telecom companies will have 1.399 billion cellular IoT users, a net increase of 264 million households in the whole year, of which the proportion of end users used in smart public utilities, intelligent manufacturing and smart transportation will reach 22.4%, 18.1% and 15.6% respectively. The total number of IPTV (Network Television) subscribers reached 349 million, a net increase of 33.36 million in the whole year.

Related news
Gu Geyun's purchase price of cornerstone technology is unknown
Google cloud has acquired cornerstone technology and the price has not been disclosed
The download speed of 5g network in the United States is only 1.8 times faster than that of 4G network
Is a 5G phone too expensive? China Telecom: Next year or will be down to thousands of yuan
Miit: China's 5G terminal users reach 450 million! Accounting for more than 80% of the world
Ministry of Industry and Information Technology: 355 million 5G users in China in 2021
Hot news this week
The developer of the dating app Tinder has reached an agreement with Google over billing rules for its app store
Red Elf Lightning erupts in the Himalayas Spectacular Spectacle: Experts Reveal What Exactly Is This?
The founder of the Internet Quick Hand Su Hua was taken away for investigation, and the fast hand responded: the news was not true
Or for Studio Display Pro, the release of Apple's 27-inch Mini LED-backlit Display has been delayed by October
One picture to understand! Blue Factory has issued 3 new machines in a row: self-developed chip blessing, the narrowest lower border
Huawei and the Chinese Academy of Sciences jointly developed the new 3D DRAM solution is expected to break through the key root technology of storage
Tencent established a smart technology company in Chengdu, and its business scope includes Internet data services
I once touched the ceiling of the mobile phone screen! Well-known brands announced that the new flagship is the first to carry the Snapdragon 8+
Or has it been spread insidiously in Communities in Europe and the United States: Should We Be Worried About Monkeypox? Experts demystify
Economist credit card monthly bill $11.4! Only paying for a purchase of Tencent Music, the account manager is busy "condolences"
The most popular news this week
Pinduoduo revenue in the first quarter of 23.8 billion increased by 7% year -on -year
Chinese stocks closed mostly up on Friday, Pinduoduo rose more than 15% Kingsoft Cloud rose more than 7%
Expert: Concerns that emojis cause expression to feel less susceptible may be exaggerated
The Changwu B rocket arrives at the Wenchang launch site and will launch the Wentian Experimental Module of the Chinese space station in July
The DuckDuckGo browser was found to have quietly allowed Microsoft to track it
Pinduoduo released the first quarter report, with a revenue of 23.8 billion yuan, starting the technology flow
Can air disinfection stick kill 99.9%coronary virus? Experts: Several levels of concentration are different
Pinduoduo Q1 revenue of 23.8 billion increased 7%and a monthly survival of 750 million. Vice president said that the growth of growth is inevitable.
Liu Chiping resigned from Tencent Music Director, Zheng Runming took over, and the latter had financial management related background
Pinduoduo: As of 12 months of March 31, 2022, the number of active buyers was 881.9 billion, an increase of 7% year -on -year