The 24th Winter Olympic Games (hereinafter referred to as the "Beijing Winter Olympics") China's national team athletes are released, and it is the largest Winter Olympics in the history of China's sports delegation. 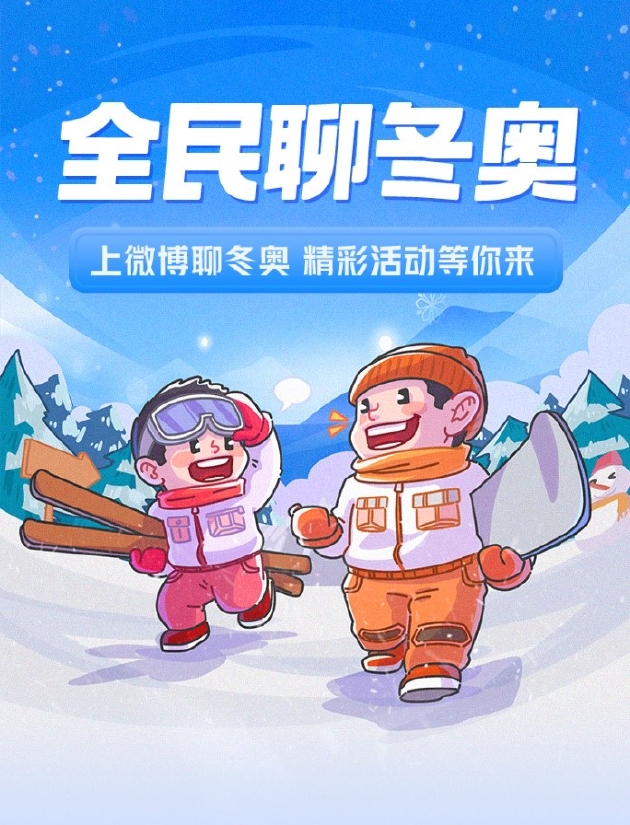 On January 30, Weibo disclosed that 176 Chinese national team participants have all opened Weibo, with a settlement rate of 100%. During the Winter Olympics, these athletes will share the feelings of the game on Weibo and interact with users. Behind these athletes are active on the platform, the microblogging sports ecosystem is more complete, which allows the athletes to show their idols, which can make users touch their idols.

At the end of 2021, Weibo became the "China Ice and Snow Culture Promotion Media Partner" in the Winter Transport Center of the State Sports General Administration, 21 China Ice and Snow National Team has all settled in the Weibo platform. During the Olympics, in order to facilitate the user to find a favorite athlete, the Weibo platform sets a one-button payment function in the topic page. Users only need to search for # 一 Pay attention to China Winter Olympics Weibo #, you can find the corresponding athlete. 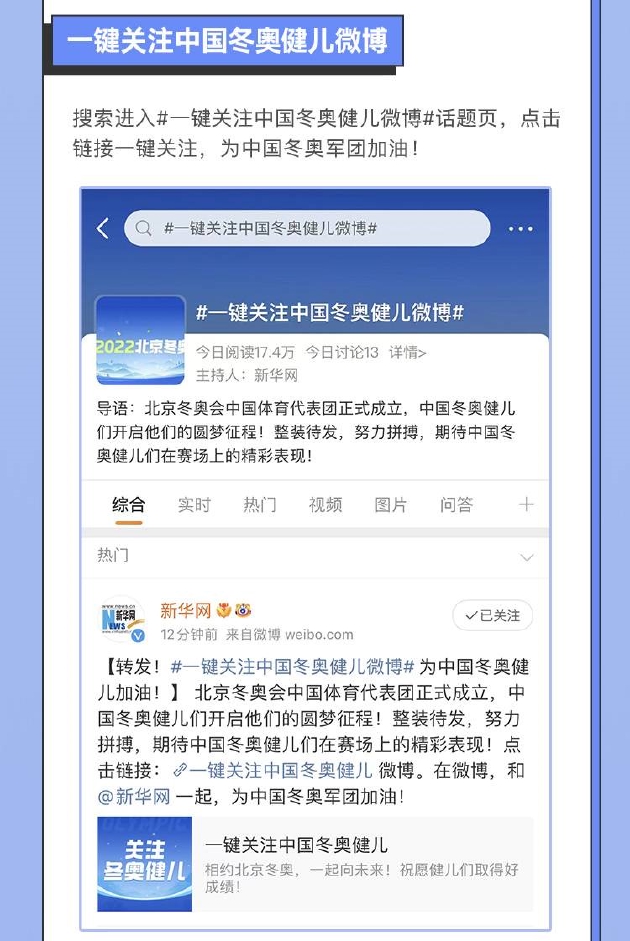 20 days of countdown, a record short film called "winner fearless" spread in Weibo. The film was described in the tone of the protagonist Yayobo. She realized the breakthrough of the Winter Olympics medals in 1992. In the film, Qiao Bo, Yosho, and the 00 post-dialogue, which reflects the shipping of China's ice and snow sports project, and makes the topic of the # 乔 波 爱 跨 跨 对 对 # 的 登 热. The topic reading volume has more than 50 million, and the people and other media and the Ministry of Foreign Affairs, Zhao Lijian, etc. Weibo V.

At the same time, Weibo also recorded the wonderful moments of Gu Ling's game and daily training. In practice, the topic has become the focus of Weibo users discussions.

The event has not yet begun, and the Weibo platform has started their "chasing star" journey. Wu Dajing's "Mirror" (his superphoni powder "updated on the platform and his related news reports, imaging materials, and Wu Da will release dynamics from time to time. On January 29th, he has released the Chinese Ice and Snow National Team to watch the graphic of the flag ceremony, expressing the wish of the Olympics. He wrote "I expect that all of us can take the best in the game, play the best record, realize the dream of the heart, no regrets."

In addition to this group of athletes who are actively preparing for the Winter Olympics, a large number of active and retired winter project athletes are gathered on the Weibo platform. Han Tianyu is both a world championship short track speed and slippery 1500m, and it is also a microblogging millions of fans. He recently participated in the "View Meeting Mail" event on Sina News on Weibo platform, answered questions from Xiaoxin, Causeway Bay Community, Shiji County, Jiangxi Province. Wang Meng, the four gold winners who have retired Winter Olympics, will recall the past contest experience in the near future. Usually, she will also travel to netizens in the Weibo platform, advocate users to participate in protecting marine biodiversity. During the Beijing Winter Olympics, these ice and snow celebration will gathered Weibo, the first time commentary, accompanying platform users.

The image of healthy sunshine makes the athlete are becoming a new idol of the whole people. When the hot event occurs, these athletes are guided by the front-generation young people to be a new weather. During the 2021 National Day, more than 200 athletes in Weibo, the motherland celebration, sports atmosphere and patriotic feelings, Su Bing Tim became # 我 我 比 比 心 # # # # Subsequently, Malong, Ding Junhui, Yang Shu, Sun Yusha, Wu Lei and other athletes have unveiled, and the relevant topic is 300 million.

During Beijing Winter Olympics, Weibo will be interactive with athletes. The participating athhers will release the VLOG video or graphic content in the Weibo platform, and they will also participate in live broadcast, and talk about tourism, electricity, education, education, and Different field topics such as food, fully showing one side of athletes outside the game. Although most people can't watch events because most people in the epidemic, Weibo users are expected to "septally interact with these athletes" on the platform.

Related news
The English name of Chinese liquor has been changed: Chinese Baijiu has been officially launched
Beijing Winter Olympics gold medal, silver medal, bronze card announcement: Chinese elements are full
China Vows Full Carbon Neutralization for Beijing Winter Olympics
Beijing Winter Olympics is about to open the Chinese team participating athletes have been stationed in Weibo
No wonder Winter Olympics athletes can't eat pepper
American athletes praise the high-tech bed in the Beijing Olympic Village The Japanese media also noticed
Beijing Winter Olympics closing ceremony is 8 am tonight! Zhang Yimou again, Chinese style
Tesla's Chinese Rivals See Record Monthly Delivery on Further Recovery from Covid
Hot news this week
With the NIL technology, Canon wants to provide China with a lithography machine comparable to the EUV
Genius hacker Geohot promised Musk 12 weeks to fix Twitter search, but posted for help because he wouldn't react
Google's parent company is planning to cut tens of thousands of jobs
The Long March 9 is basically confirmed: the low-orbit carrying capacity of 150 tons can carry the entire space station into space
A small plane in the US has crashed into a 30-metre high voltage power line and got stuck: 80,000 people affected
Google is concerned that Microsoft's acquisition of Activision Blizzard will affect the ChromeOS experience
Alibaba launched a new cross-border e-commerce platform in Spain, aiming to operate independently in the middle and high-end market
Can recording others' wechat chat records be used as evidence? The Beijing Internet Court has an answer
The second generation Snapdragon 8 flagship! Mi 13 toughened film appeared: four sides and other narrow screen accounted for a stable ratio
A Tesla crashed into two cars in Taizhou, Zhejiang province, killing two and injuring one, police said
The most popular news this week
Eggs don't fit in one basket: Some of the Snapdragon 8 Gen2 is manufactured by Samsung
128 core 256 threads! AMD Zen4c is here: Arm is cornered
Breaking the spell of "Android 3 year must card", the new Breguet mobile phone will be sold for the first time tomorrow: from RMB3499
Be careful with your phone for a long time! The aunt played with her mobile phone so much that her fingers got stuck
More conscientious than Google, the OnePlus promises a 4-year upgrade: Android 17 beckons
What do Chinese teenagers do online? It's comforting to be third and first in gaming
Tmall sought 500 million yuan in loans from ofo affiliates and Dai Wei
Tencent Holdings: bought back 36,200 shares at a total cost of HK $10.606 million
Tuniu's third-quarter revenue fell 32% from a year earlier to 7,790 yuan
Xiaomi 13 press conference new product summary: In addition to the phone there is a monster new