The latest rendering of the Samsung S22 Ultra is out: ultra-small digging double-curved screen, with its own S-Pen

Some time ago, Samsung has officially announced that it will officially hold the S series conference on February 9, and the biggest protagonist of this conference is the latest generation flagship - Galaxy S22 series.

According to previous news, there are still three models in the S22 series, namely galaxy S22, Galaxy S22+, and Galaxy S22 Ultra. 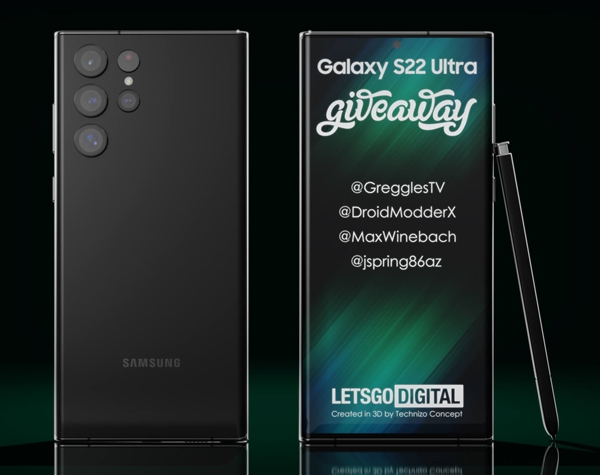 Recently, letsgodigital brought the latest HIGH-definition rendering of the top version of the Galaxy S22 Ultra, allowing us to have an early look at the design of the machine.

According to the pictures, the Galaxy S22 Ultra as a whole is very different from the previous S series style, almost completely the design of the Note series.The front uses a visually tough hyperboloid screen, the front shot is a centering digging scheme, but the aperture of the opening looks very small, and the overall screen ratio is very good.

What's more, the Galaxy S22 Ultra will also come with its own S-Pen stylus, which can be stored on the bottom of the phone, which is also the biggest difference between the previous Note series and regular mobile phones, and the most important highlight. 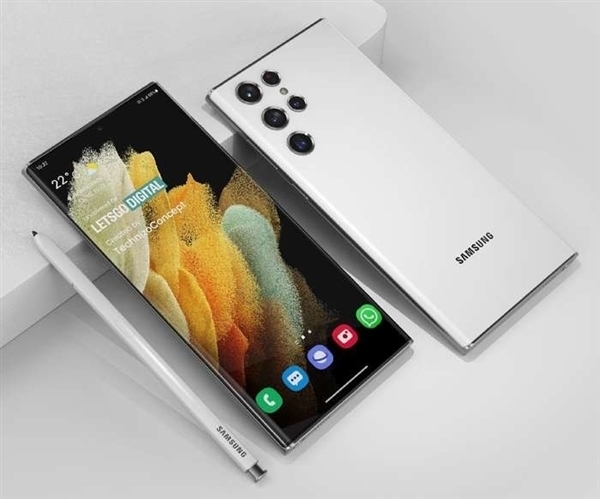 In terms of specifications, the Samsung Galaxy S22 Ultra will be equipped with a 6.8-inch QHD+ Dynamic AMOLED 2X panel, support HDR10+, 120Hz adaptive refresh rate and 1750 nits peak brightness, and will also be equipped with 45W fast charging.

As for the back design, it adopts a very simple split design, which does not make a whole camera area protrude, which has four cameras built-in, but it is not equipped with a periscope telephoto lens.

Related news
First batch of Snapdragon 898! S22 Ultra confirmation and Note integration: built-in SPen
It was reported that the Galaxy S22 Ultra had been renamed note 22 Ultra S22 Plus and the S22 Pro
Sources say the Samsung S22 Ultra will likely be called the Note 22 Ultra S22+ into the S22 Pro
Designer sharing Samsung Galaxy S22 Note Ultra Smart Concept Rendering Chart
One of the strongest dragons 898 flagship! Samsung S22 Ultra real machine first exposure: perfect
Samsung Galaxy S22 Ultra: Two flagship benefits of S21 Ultra and Note 20 Ultra
God seems to Note 21 Ultra! Samsung Galaxy S22 Ultra Rendering Dialect
The Samsung Galaxy S22 Ultra reduces S Pen latency by two-thirds
The latest rendering of the Samsung S22 Ultra is out: ultra-small digging double-curved screen, with its own S-Pen
Samsung's flagship is underrated: designed to win with the S22 Ultra
Hot news this week
With the NIL technology, Canon wants to provide China with a lithography machine comparable to the EUV
Genius hacker Geohot promised Musk 12 weeks to fix Twitter search, but posted for help because he wouldn't react
Google's parent company is planning to cut tens of thousands of jobs
The Long March 9 is basically confirmed: the low-orbit carrying capacity of 150 tons can carry the entire space station into space
A small plane in the US has crashed into a 30-metre high voltage power line and got stuck: 80,000 people affected
Can recording others' wechat chat records be used as evidence? The Beijing Internet Court has an answer
Alibaba launched a new cross-border e-commerce platform in Spain, aiming to operate independently in the middle and high-end market
Google is concerned that Microsoft's acquisition of Activision Blizzard will affect the ChromeOS experience
The second generation Snapdragon 8 flagship! Mi 13 toughened film appeared: four sides and other narrow screen accounted for a stable ratio
A Tesla crashed into two cars in Taizhou, Zhejiang province, killing two and injuring one, police said
The most popular news this week
QQ membership via SMS has become a thing of the past: Tencent officials said the relevant business functions have been offline
Two men ransacked an Apple store and made off with more than 200,000 products: a textbook move by the employees
South Korea 2-1 Portugal repeat Asian miracle: Lei Jun with Xiaomi 13 thumbs up
The standard version is unbeatable and sells for 3,999 yuan for Mi fans
Two new Huawei devices are ready to launch: one is more creative
For the first time ever! NVIDIA graphics card to play the game flash screen must refresh the BIOS
Samsung Galaxy Z Flip5 exposure: Larger screen, fewer creases
What is this picture? Intel next generation Fever U also has 6 cores!
1W less than 40 cents 550W gold medal full module power 199 yuan RTX 3060 are enough
Viral 'Coronavirus Medicine Sequence' : Reliable? Experts guide the way