(Observer Network News) American athlete Summer Bridger praised the bed of the Beijing Olympic Village, which made many athletes who participated in the Tokyo Olympic Games envious, and the Japanese media also paid attention to the matter.

This morning (4th), Japan's Kyodo News Agency published an article titled "Athletes Compare The Beds of the Beijing Winter Olympics and the Tokyo Olympics Have Aroused Heated Discussion", which said that "American athletes participating in the Beijing Winter Olympics praised the high-tech beds in the rooms of the Winter Olympic Village on social media, and the comparison with the Tokyo Olympic Games that consider environmental protection and use corrugated cardboard beds has become a topic." In the face of the continuous voices of athletes participating in the Tokyo Olympics, he said that "for the top athletes preparing for important competitions, it is true that sleep comfort seems to be more attractive than environmental protection." ”

Earlier, the Japanese media The digest also posted an article on this matter, quoting the US media as saying, "(The bed of the Beijing Olympic Village) makes the athletes who have participated in the Tokyo Olympic Games envious." ” 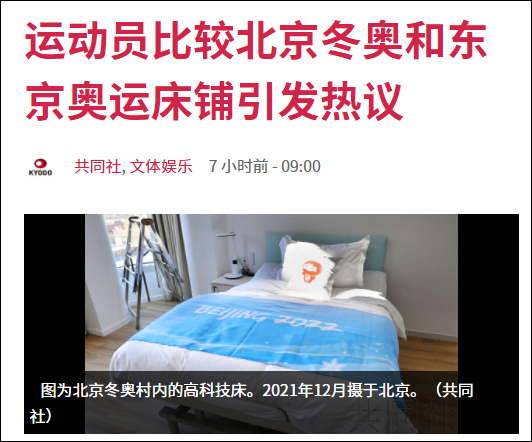 Recently, the representative teams of the Winter Olympics from various countries have arrived at the Beijing Olympic Village, local time on January 28, the American bobsleigh athlete Summer Britcher took a video to share his excitement of staying in the Olympic Village to fans, "I have some incredible things to share", in the video, she picked up the bed with a remote control, personally operated to introduce the mattress can be raised and lowered to multiple positions, the picture turned, the bed became close to the state of the sofa, she comfortably leaned ...

"It was unbelievable" that the Beijing Organising Committee seemed to be saying, 'How can we be only a little better than the Tokyo Olympics?'" 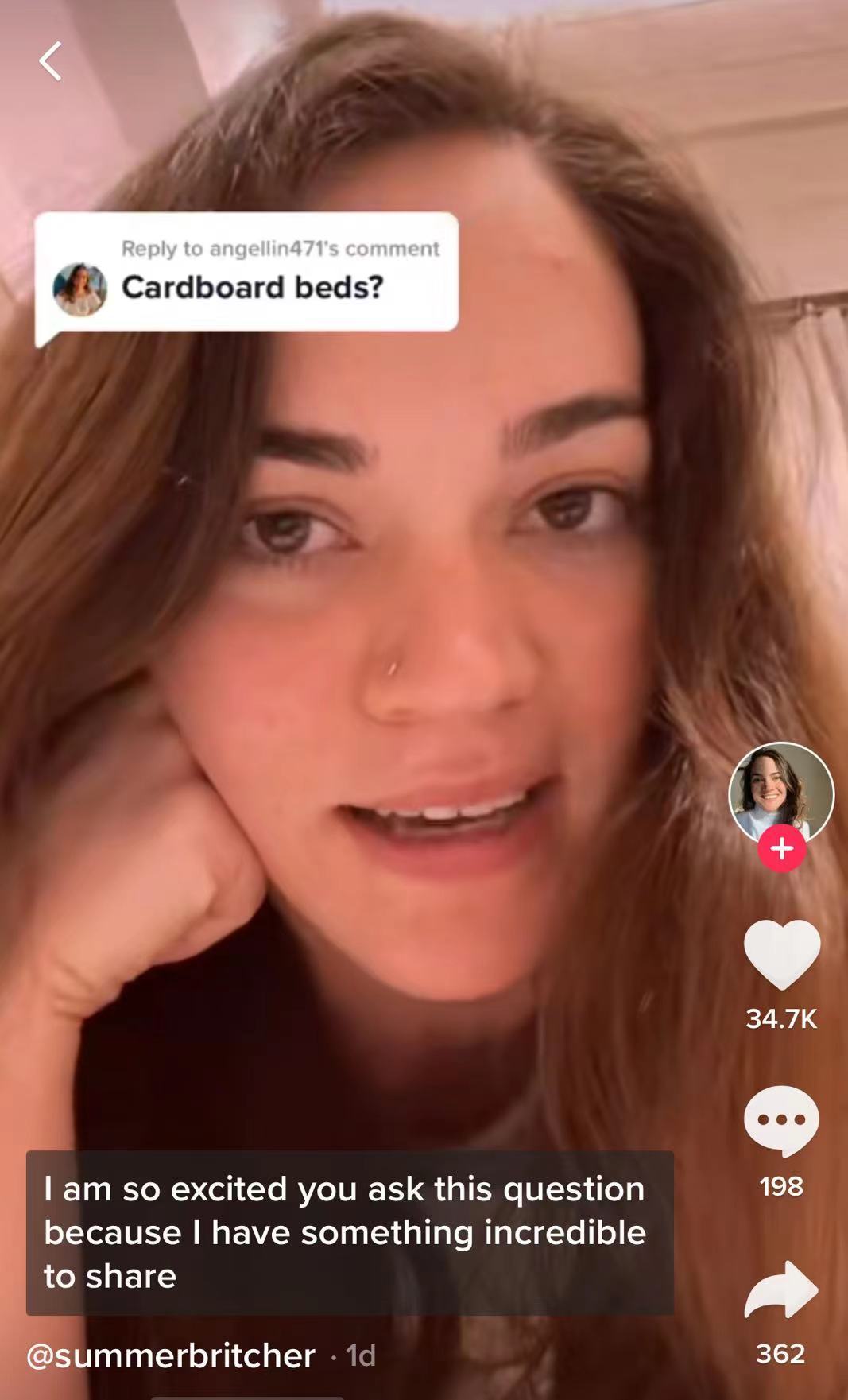 The video quickly attracted attention, and many foreign netizens were envious, and some athletes who participated in last year's Tokyo Olympic and Paralympic Games also wrote their feelings in envy.

Ilona Maher, an American female football player, recalled the scene and said that after lying in the bed [of the Tokyo Olympics] for a week, her back began to hurt, and American weightlifter Mattie Rogers replied directly with a sentence of "I cried."

Emma Schieck, the seated volleyball player who helped team U.S. win the gold medal during last year's Paralympic Games, also said, "As a member of the Tokyo Olympics, seeing this scene reminds me how uncomfortable the cardboard bed was at that time." ”

After Summer Britcher's video caused a hot discussion, a number of foreign media also followed the report, the US media Business Insider, Newsweek and other media mentioned when reporting on the matter, Summer Britcher's feelings and last year's Tokyo Olympics and complained about poor accommodation conditions are in stark contrast.

American skateboarder Nyjah Huston has bluntly described beds in the Tokyo Olympic Village as "hard and uncomfortable," and track and field athlete Gabby Thomas said mattresses and pillows have made it difficult for her to recover from training.

The Japanese media also noticed that athletes who had participated in the Tokyo Olympic Games were envious of the bed in the Beijing Olympic Village.

The Japanese edition of the Huffington Post also said that "the configuration of the Beijing Olympic Village has excited athletes from all over the world."

This morning, the Japanese media Kyodo News Agency published an article on the topic of "Athletes Compare the Beds of the Beijing Winter Olympics and the Tokyo Olympics to Cause Heated Discussions", saying that Summer Bridger (27), who lives in the Winter Olympic Village, praised the short video APP "TikTok" while controlling the tilt of the bed with a remote control while choosing "zero gravity mode". As of 3, the video had been played more than 360,000 times. According to British media reports, the bed can also measure the number of heartbeats and the number of breaths. It is advertised that the mattress can be adjusted with the curve of the body to guide people to a deep sleep.

Kyodo News Agency said that for Summer Bridger's video, some people commented that "thanks to the Tokyo Olympic Games that consider environmental protection", and some American athletes who participated in the Tokyo Olympic Games posted that they "recalled how uncomfortable corrugated cardboard beds were", etc., and then the article said, "The corrugated cardboard beds used in the Tokyo Olympic Village can be recycled, intended to send a message of environmental protection to the world." For this new attempt at the Olympic Games, although there were voices questioning the strength of the bed, many athletes uploaded videos of jumping in bed and doing yoga to confirm the intensity, which caused heated discussions. ”

The article said, "For the top athletes preparing for important competitions, it is true that sleep comfort seems to be more attractive than environmental protection." ”

According to the surging news, the bed in the Beijing Winter Olympic Village is equipped with an adjustment function, which can provide appropriate support for the spine in different scenarios such as sleeping and sitting postures. The mattress is made of memory foam material and has built-in sensors, which can achieve functions such as massage, zero pressure, and alarm clock pushing. After setting the alarm, the bed will automatically take off and land at the set time; once the smart bed recognizes the snoring sound, it will also adjust the height of the head to alleviate the snoring. In addition, for athletes with the need for an extended bed, the bed is equipped with a foot stool, so that the length of the entire bed can reach 2.2 meters to 2.4 meters.

Related news
The opening ceremony of the Olympic Games reflects epidemic elements, and the entrance clothes of the Chinese Olympic delegation appear
China Vows Full Carbon Neutralization for Beijing Winter Olympics
Dutch goddess famous winter Olympics small video popular in love with Chinese famous food! Foreigners rave about it
Beijing Winter Olympics open tomorrow: Zhou Hongyi, Wang Haifeng and other tech titans as torchbearers
No wonder Winter Olympics athletes can't eat pepper
American athletes praise the high-tech bed in the Beijing Olympic Village The Japanese media also noticed
Hot news this week
Female graduate students leave school to give birth to the hot debate is hype? The husband has set up a webcast company
How much is 4G than 5G! Huawei Mate50 network speed detailed measurement 6799 yuan to buy explosion money?
It's hard to find a machine! Huawei Mate50's first sales: oxen can not buy the price of 10,000 yuan to grab the price
Huawei City's proportion is the first! Survey: Northerners love to use folding screens more than southerners
Our global car he is a special car for China! Saic Volkswagen and FAW-Volkswagen are fighting each other
Chongqing Xiaomi Consumer Finance Co LTD has been fined 500,000 yuan for misappropriating consumer loan funds
Are they really aliens? The US Navy confirms there are multiple UFO videos: but they cannot be made public
The second phase of the main structure of Xiaomi intelligent factory is completed to see the delivery at the end of next year
In order to change the iPhone 14: Women's net red sells old phones and comes with a large number of private photos
"Sheep a sheep" fire, is expected to attract hundreds of millions of financing? But it doesn't have a license...
The most popular news this week
Is Boeing envy? China Holy Purchase 332 Air Passenger Aircraft and China assembly 600th delivery
115 Web disk V30 version released: LOGO big change one -click backup WeChat content
Foxconn dismantles production line! The worst iPhone 14 sales ever: Apple failed
China's first pure electric convertible! Wuling Hongguang MINI EV Convertible Edition Listing: 99,900 yuan
Samsung applying for a dual -screen camera patent to support face recognition
There's a tidal wave of lying down, and ceos of big American companies are worried, saying, "Never seen anything like this."
Tesla sales response "disguised price reduction of 8000 yuan" : for the end of the quarter impulse, temporary activities
Apple iPhone 14 standard version is not good for sales, Lixun precision may face the risk of ordering orders
Billions of euros in investment, Intel Italy chip factory will be located in the Veneto region, sources said
China Mobile to develop 5G Tidal Smart Antenna: Where the crowd